Greetings from Vienna and ATTD 2018, where today’s pre-conference content included insightful corporate symposia from five companies: Abbott, Medtronic, DreaMed, Ascensia, and Roche. In the evening, we were on the edge of our seats listening to Jaeb’s Dr Roy Beck on Outcomes Beyond A1c. We’ll expand this Day #1 highlights report soon, including more from Dr. Danne’s opening keynote on CGM Consensus Statements.

In an interactive workshop, we were pleased to get our hands on Unomedical/Medtronic’s new MiniMed Mio Advance – an all-in-one, fully disposable insertion set with a hidden needle. It’s difficult to imagine a more user-friendly device: The MiniMed Mio Advance is ready-to-use upon unwrapping, inserts with the single push of a button, and can even be inserted one-handed for difficult-to-reach areas (see the demo here). It looks great for pediatric patients and elderly patients who may struggle to insert their infusion sets independently. According to workshop leader Dr. Carine de Beaufort, the MiniMed Mio Advance works with any insulin pump with a luer-lock connector, though it is only compatible with 6mm teflon tubing to date (other variations are on the horizon). Developed by Unomedical, we saw the set for the first time at ATTD 2017, and today’s symposium implied it has launched in the UK. The patient feedback has been quite positive: In a UK-based pilot launch test (n=24), 92% of participants claimed that the product is better than their current infusion set, 87% were “extremely” or “very” satisfied with the product, and it exceeded customers’ expectations for eight out of ten users. We’re glad to see a more intuitive and less intimidating insertion device, which looks even friendlier than BD’s MiniMed Pro-set (on which Medtronic is the exclusive partner). We’ll try to get more details this week on launch timing in other geographies. Given the debut in Medtronic’s session/booth, the set is clearly not launching in an exclusive partnership with a Luer Lock pump, as Unomedical told us last year. 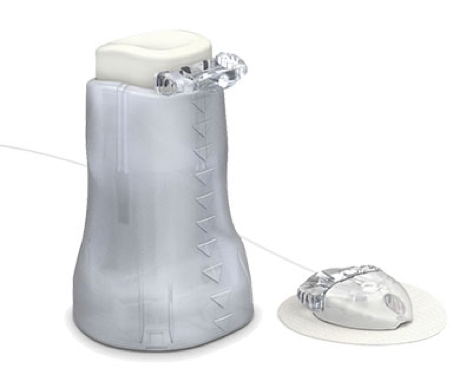 To a standing-room-only audience, DreaMed demoed its CE Marked Advisor Pro clinical decision support software for optimizing pump settings, which gives HCPs specific pump basal, insulin:carb, and correction factor adjustment recommendations based on CGM data – the user experience on the Glooko web-based Population Tracker looks great (see pictures below), and the company is here in the exhibit hall looking for early adopter clinics. A press release just went out sharing that the decision support software has received a CE Mark, and a soft launch will occur this summer in Europe. Great news! The product has also been submitted to FDA, a big milestone and major progress in the past year. Once a provider approves the dose changes on the Glooko web app, they can send them to a patient electronically. A seven-center, n=112 Helmsley-funded study is ongoing in the US, Europe, and Israel, with results expected by the end of 2018. The aim of the study is to assess the ability of Advisor Pro, as compared to diabetes experts, to adjust blood glucose levels within a predefined range and to prevent hypoglycemic events during a six-month intervention period. We’ll hear more from DreaMed later in the week. 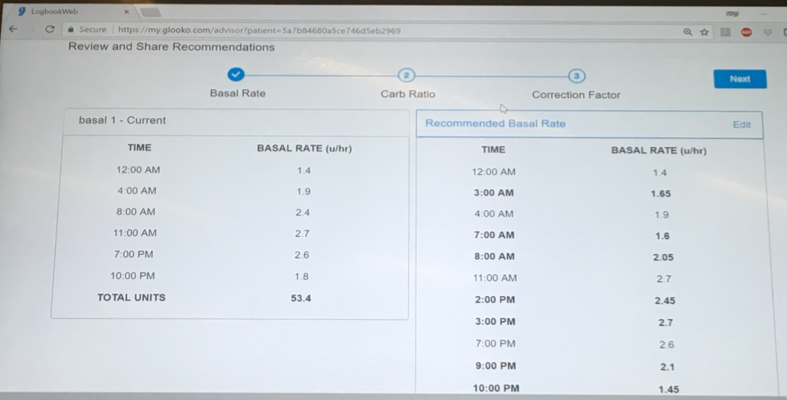 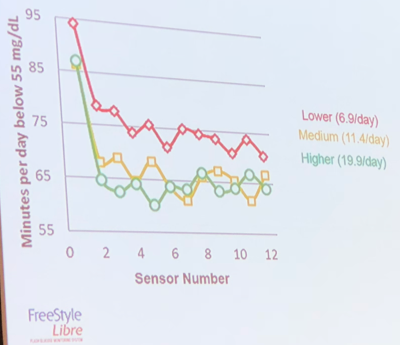 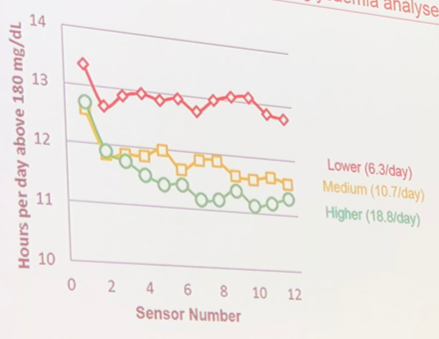 4. Ascensia: BGM and CGM – Is There Only One Future?

A well-attended Ascensia symposium tackled the fascinating topic – what will glucose monitoring look like in the foreseeable future? The session included five cool glucose monitoring market insights from our own Adam Brown – download his slides here, which leverage dQ&A data and highlight real-world fingerstick frequency (scary), connected meter penetration (mind-numbingly low), what drives patient choice of device, growth/penetration in the CGM market, and endocrinologist prescribing preferences. Dr. Steve Russell gave an outstanding concluding talk on the importance of accurate BGM for automated insulin delivery, sharing his pyramid of diabetes tech with BGM at the bottom, CGM above it, and automated glucose control on top – without accurate BGM, the whole system breaks down. Dr. Russell recognizes the benefit of factory calibrated systems like FreeStyle Libre, but he doesn’t believe they are currently ready for prime-time use in automated systems. Meanwhile, scientific talks from Drs. Guido Freckmann and Marc Breton touch on accuracy, emphasizing that MARD is an incomplete measure of CGM accuracy – both are fans of adding %20/20 and %15/15 as additional metrics to characterize accuracy, especially because MARD misses outliers. Overall, this symposium left attendees feeling like BGM will be here for a while, especially given some of the dQ&A insights we heard (many of which really surprised our team).

At a Roche symposium, mySugr said that it now has ~1.2 million registered users, half of which are type 2! We were very excited to hear this on the type 2 front. In the same session, a German GP shared encouraging weight loss results from an RCT of Roche’s Accu-Chek View, calling it  “one of the best developments over the last months and years,” and, crucially, that “the effort we put into these patients is minimized compared to usual care.” This is the most we’ve ever heard on the Accu-Chek View prevention program, and are excited to know that it leverages PCPs while also reducing their burden – this could be a recipe for scale, and it is notable that the program is already supported by statutory health insurance in Germany.

The diaTribe Foundation’s Beyond A1c 2.0: Where Do We Go From Here?

The diaTribe Foundation’s hosted a breathtaking ArtWalk #4 at the Belvedere Palace. This is Vienna's most famous museum with the world’s largest collection of Klimt oil paintings, along with a magnificent collection of art immortalized by Claude Monet, Egon Schiele, Vincent van Gogh, Max Beckmann and others. The museum was closed exclusively for a reception for guests of The diaTribe Foundation, followed by a tour of these magnificent works, featuring Klimt’s legendary “The Kiss," as well as so many other of his gorgeous paintings. Afterwards,  attendees took a gorgeous walk to an incredible local tavern called Gmoakelle to hear Jaeb’s legendary Dr. Roy Beck give a comprehensive overview on CGM outcomes beyond A1c. Download his fascinating slide deck here. In a 40-minute presentation, he detailed the limitations of A1c (not indicative of mean glucose on an individual level), consensus CGM metrics and data visualization (same as were agreed upon at last year’s Glycemic Outcomes Beyond A1c meeting), the validation of CGM metrics for trials, and the debate over estimated A1c (eA1c). Dr. Beck weighed in on one of the new hot questions in the glucose-centric movement: How much time in range (70-180 mg/dl) should people be spending? “Humbling” data from the T1D Exchange – some of the very best clinics in the US – showed that adults spend a mean 40%-50% of their time in the ideal glucose range, while youth spend 30%-40%. While he didn’t provide specific recommendations (it really is too soon to know until the field analyzes time in range profiles of patients considered to manage their diabetes with the very best tools and at the highest levels), he challenged everyone present to take the data as a reminder that “we’re not even near the end of where we need to be.” Unfortunately, despite the scientific community’s consensus on CGM metrics, they still have to be accepted by FDA (particularly CDER) to really move the needle – Dr. Beck sees hypoglycemia as an easier sell than time in range since there are copious data that time <54 mg/dl is detrimental. The door is still open for time in range, and Dr. Beck sees a few routes to close it: (i) evoke the transitive property of equality – time in range is associated with A1c and A1c is associated with CV complications, therefore time in range is associated with CV complications (“hasn’t sold them yet”); (ii) Use CGM in a longitudinal study to see if time in range is associated with complications (which is actually currently underway in the NIH-funded PERL study in kidney disease, thanks to Dr. Irl Hirsch and others); (iii) redo the DCCT with CGM (“doesn’t seem practical” though we’d still say it’s not impossible); and (iv) use 7-point SMBG profile data from the DCCT to look for associations between in-range readings and complications (on Dr. Beck and Bergenstal’s already busy docket). Dr. Beck also showed many fascinating correlations in his talk (download the slides), highlighting that time-in-range is really a measure of hyperglycemia, and that many metrics are highly correlated with each other – including different measures of hyperglycemia (>180, >250, area under the curve, HBGI), hypoglycemia (<70, <54, area under the curve, LBGI), and variability metrics. Dr. Beck proposed that two measures are always going to be needed – e.g., time-in-range and time <54 mg/dl – as one metric cannot capture everything. Lastly, we were not previously aware that CDRH has received complaints that eA1c values (based on CGM data) were not aligning with lab-measured A1c values. While the CDRH staff likes the metric, they declared that it needs a new name to avoid seeding confusion and even distrust in either CGM or lab values. A survey was sent to ~100 endocrinologists and nurses in the T1D Exchange to ask for opinions, which ranged from “get rid of A1c altogether” to “Estimated Long Term Glucose Control” and “Three Month Glycemic Estimate.” Eventually, a number of folks in the field have come up with “Glucose Management Indicator” (GMI), of which Dr. Beck seems to be a big fan – he asked the room to vote on it and received great positivity. He sealed his talk and a follow-up conversation with our own Adam Brown definitively: “We’ve seen in our studies, if you had to pick one device, there’s no question in my mind, CGM is more important than a pump.” Pumps will be, of course, very important as a number of people move toward the closed loop. He also said it would be very important to have a room full of hypoglycemia experts consider questions around validation. Finally,Dr. Beck urged the entire room to think about more access to CGM, looking forward to a day where it is available in pharmacies without a prescription. In fact, Dr. Beck is looking at a study on that front, comparing home delivery of CGM with self-training to usual endo-prescribed CGM – whoa! We are elated that we have leaders like Dr. Beck leading the charge to embrace more patient-centric metrics of diabetes and that there are so many people in the field eager to think expansively – aided by the vision of Belvedere Palace and Gustav Klimt paintings.