Greetings from the City of Champions, home of the Red Sox, Celtics, Bruins, Patriots, and of course, ISPAD 2019! Day #2 was incredibly busy and full of excitement – see our top highlights below!

During a rapid-fire afternoon session on ways to improve clinical care delivery, Dr. Mark Clements (Glooko / Children’s Mercy Kansas City) presented promising data on a machine learning-based model for predicting A1c at the next visit, based on the last A1c value, discrete EMR data, and available diabetes device data. The model, which is a random forest (i.e., a “forest” of many decision trees), was fitted and tested using data from 1,743 youth (≥9 years old) who recorded 9,643 visits. Discrete EMR data (vs. free-form text fields), patient reported outcomes (PROs) from an electronic intake form, and diabetes device data were used to feed the model, along with the last recorded A1c value. The machine-learning (ML) model outperformed both a null prediction model and a linear prediction model (i.e., future A1c rise will be the same as the most recent A1c rise) at predicting A1c rise at the next clinic visit. Using EMR and PRO data alone to predict patients whose A1c would rise 0.6%, the model’s PPV was ~50%, meaning about half of the cases that the model identified actually saw an A1c rise of ≥0.6%. In comparison, the PPV for an A1c rise of 0.6% was just 30% using a linear model, i.e., 30% of the cases identified by the linear model actually had an A1c rise of ≥0.6%. For an A1c rise of 0.3% over 3-months, the PPV was 56%, with a sensitivity of 21% (i.e., the model was able to identify one-fifth of all participants who actually saw a 0.3% A1c increase). When 2-weeks of diabetes device data were added into the model, PPV was improved to ~60% for an A1c rise of 0.6%. Unsurprisingly, the model performed better with device data that was more recent. Using the model, a clinic is able to identify at-risk youth to clinicians so that preventive action can be taken. Children’s Mercy is using the information to perform video “micro-visits” every 2-3 weeks and encourage data sharing and peer mentoring for identified patients. 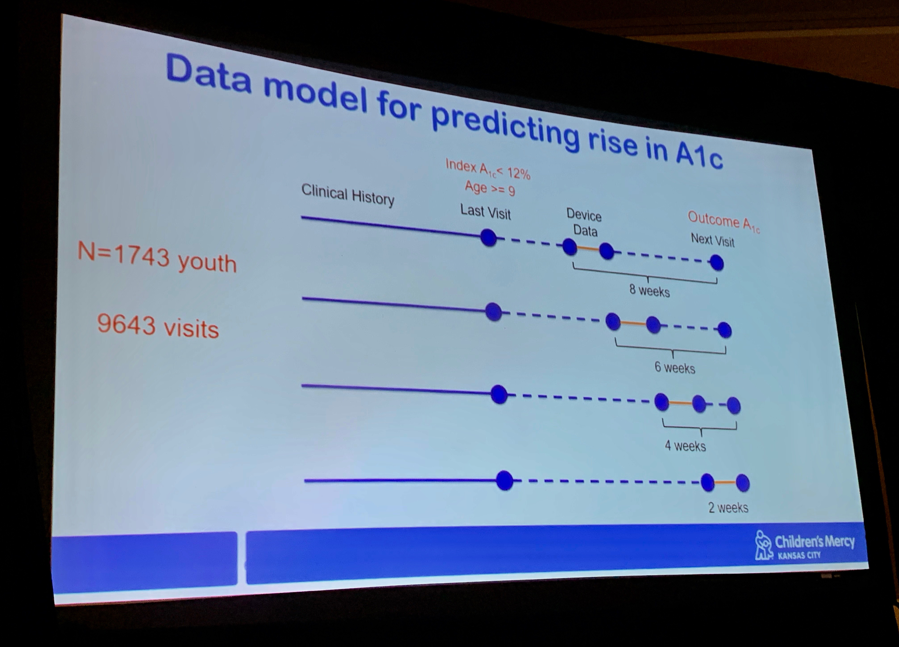 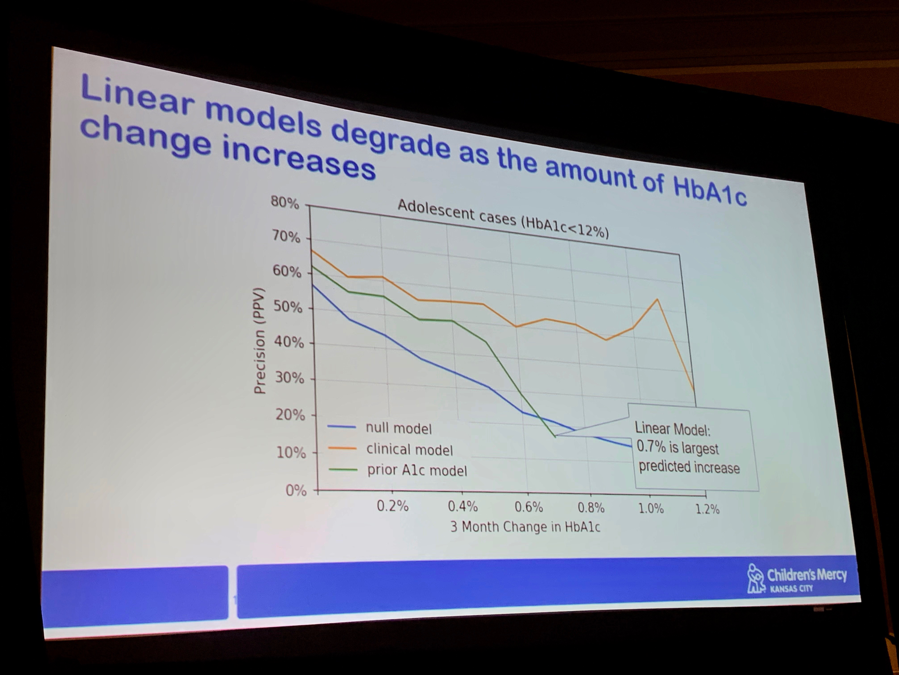 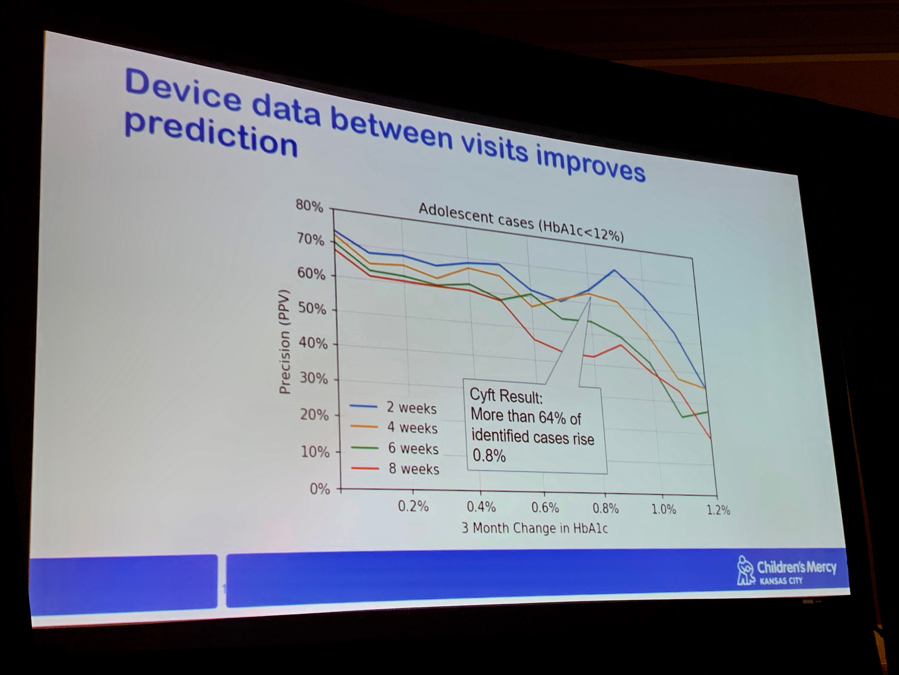 Q: What are some of the modifiable risk factors identified by the model?

A: Well, there are some risk factors that aren’t modifiable, like ZIP code, but there were modifiable risk factors. From the device data, we were able to parse out the number of fingersticks/day, insulin boluses/day - each of these had a significant weight and could be the targets for interventions.

2. Dr. Roy Beck: “The Only Value of HbA1c if CGM is Available is for Historical Purposes”

A leading voice in the beyond A1c movement, Dr. Roy Beck (Jaeb Center), made a strong case for time-in-range (TIR) over A1c, summarizing his argument by showing an ambulatory glucose profile and asking, “Would you rather have this or would you rather have one number that reflects someone’s average over the last three months, and may not even be an accurate average?” Dr. Beck’s talk touched on many facets of the beyond A1c movement, including consensus targets for CGM metrics, measures of glycemic variability, and the relationship between TIR and complication rates. 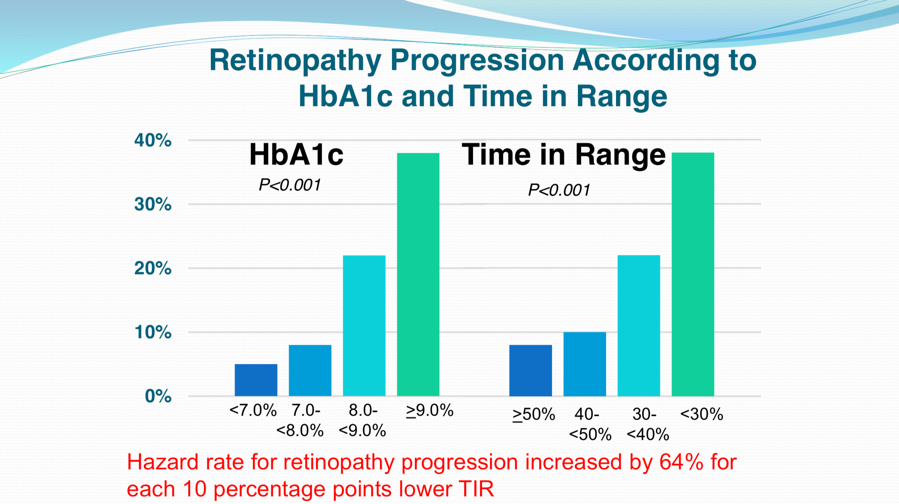 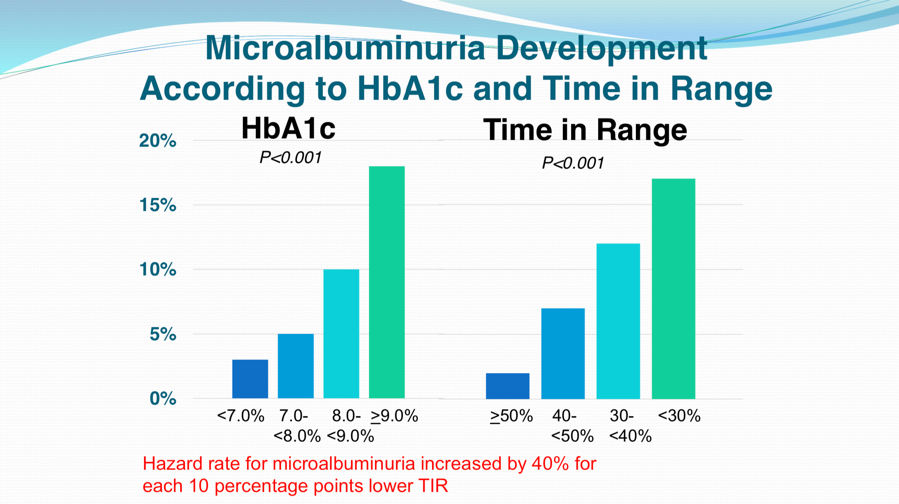 Q: If you had to design a trial, would you go for the seven fingersticks/day (from the DCCT trial), A1c, or CGM? How much time would you need for the CGM to be used?

A: CGM is easier and now, you get more than seven points a day – I’d rather have 288 points/day. We’ve shown you need about 10-14 days during a pretty stable time to get a good estimate of glucose metrics, so in studies, we try to get two weeks of data, either with real-time CGM or blinded, and then we gather data in 10-14 day intervals … In some closed loop studies, like this week’s NEJM paper about Control-IQ that the NIH-funded, they use CGM metrics as the primary outcomes. The FDA is not willing to accept that yet as part of an effectiveness claim, so there’s a lot of work going on to get the FDA to come along. One challenge with CGM, compared to A1c, is that you have to actually wear it. It becomes a challenge if it’s going to be a metric to make sure you get a high level of adherence.

A poster demonstrated the effectiveness of Tandem’s low glucose suspend algorithm, Basal-IQ, in 2,696 real-world pediatric (ages 6-17) t:slim X2 users. The data, uploaded to t:connect between August 2018 and March 2019, showed 0.9% of time spent under 70 mg/dl, or just 13 minutes per day! On average, the Basal-IQ algorithm suspended insulin delivery 4.9 times/day for an average of 15.5 minutes per suspension. On average, users’ glucose values were at 111 mg/dl when suspension was initiated and 100 mg/dl when insulin delivery resumed. The 0.9% of time spent in hypoglycemia was even lower than the 1.2% reported in Tandem’s first round of real-world data from Basal-IQ shared at ATTD 2019.

At a Lilly-sponsored symposium on Baqsimi (nasal glucagon), Mr. Jeff Hitchcock (Children with Diabetes) shared multiple personal stories about his experiences with severe hypoglycemia. The stories were powerful and moving, and all of them emphasized how important it is for people with diabetes and their caretakers to be prepared to treat severe hypoglycemia. Baqsimi, launched just a few months ago, has already seen strong uptake in the US, holding one-third of all new brand prescriptions. Given the challenges with using traditional glucagon, we’re surprised this number is not even higher although we know drug adoption for anything new can be slow. We hope to see more investment in marketing. 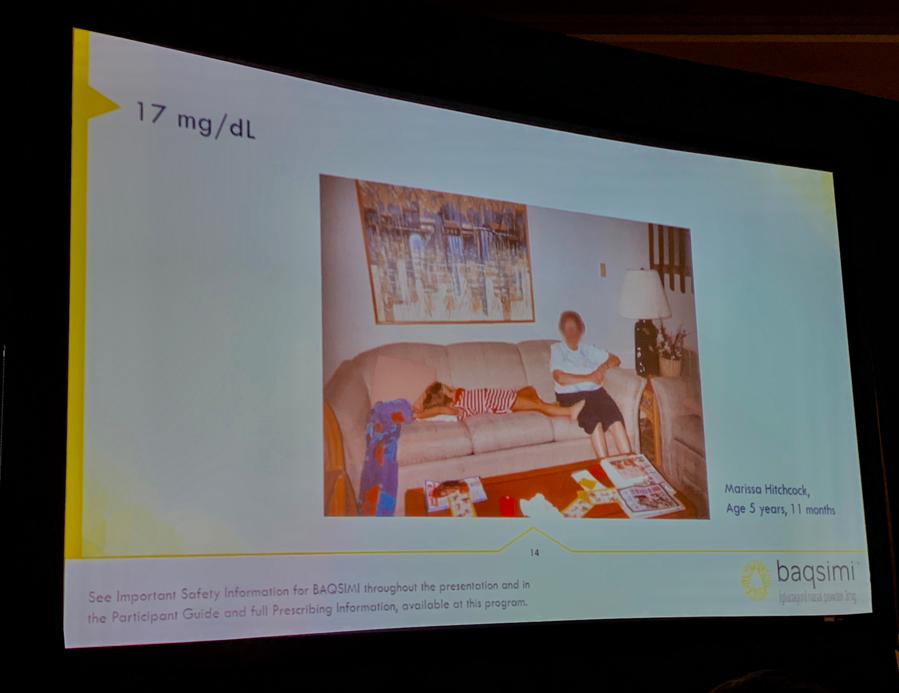 In yet another demonstration of his brilliance and poise, Dr. Bruce Buckingham (Stanford University) powered through a presentation of positive results (+4 hours/day time-in-range) from Omnipod Horizon in young children, even as the presenter’s laptop malfunctioned making his slides disappear (“Photography is permitted at this presentation,” he quipped.). While Dr. Buckingham first read out the study (n=14) at ADA 2019, he shared information about an adverse event, which was deemed to be unrelated to the system itself, for the first time. The study evaluated the safety and efficacy of Omnipod’s Horizon automated insulin delivery (AID) algorithm in young children, ages 2-6. The study involved seven days of standard therapy baseline data collection followed by 48-72 hours in a supervised hotel setting (a fun-looking “hotel” we’d note – see below). Without the algorithm integrated on the pump, participants had to carry a tablet with MATLAB that held the algorithm and handled communication between the CGM (Dexcom G4 or G5) and Omnipod. The participants, mean age 4.8, had fairly tight glycemic control at baseline with an A1c of 7.4% and mean glucose “around 174 mg/dl.” Notably, the study included both MDI and CSII participants, with MDI participants going straight to the closed loop system. The kids were allowed to “free-range” their meals and averaged exercise time of ~1 hour/day (e.g., trampoline, laser tag, etc.). 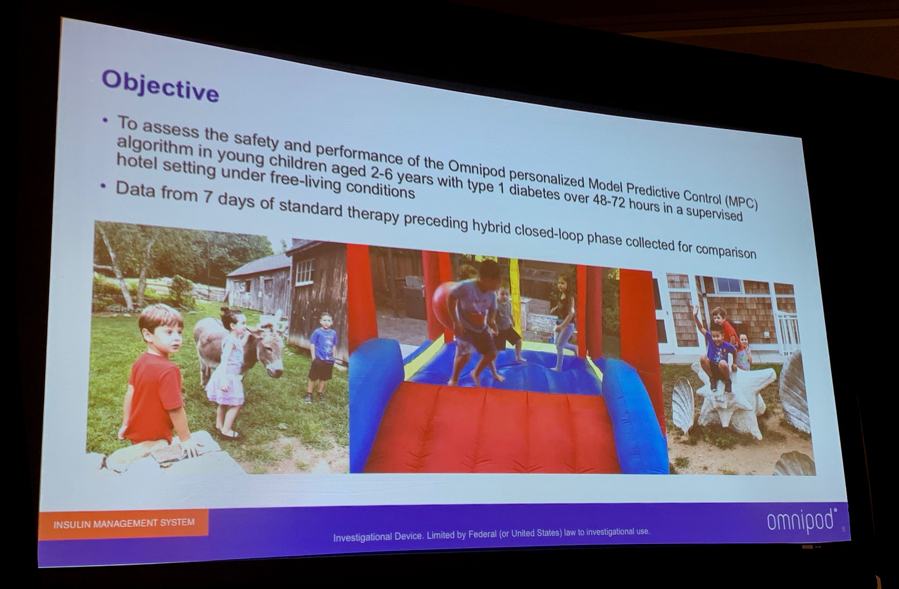 6. Could Early Treatment with ACE Inhibitors and Statins Prevent Vascular Complications in Youth with Type 1? Updates from the AdDIT Study

Dr. Loredana Marcovecchio presented findings from the Adolescent Type 1 Diabetes Cardiorenal (AdDIT) study, which sought to determine if early initiation of ACE inhibitors or statins could prevent the onset of kidney, eye, and cardiovascular complications. This update focused on whether treatment with ACE inhibitors and statins prevented CVD onset via urinary albumin excretion as a link between renal health and CVD. Higher albumin-to-creatinine (ACR) ratio, even within normal limits, was associated with progression to worse CV profiles. Thus, Dr. Marcovecchio believes that early screening for ACR may be valuable to identify teens at high risk for vascular complications. The next phase of AdDIT sought to do just so and focused on a group of patients with high ACRs. Treatment with statins reduced lipid levels, but didn’t impact more direct measures of CVD, while treatment with ACE inhibitors reduced progression to microalbuminuria. Both therapies were well tolerated with high adherence rates, and longer-term studies are needed with stricter CVD endpoints to determine the usefulness of these therapies in this younger population. The AdDIT Follow Up study plans to track risk for vascular complications from adolescence to adulthood, and completion is expected in 2021. The hope is that full results from the follow up study can lead to better risk assessment protocols based on the link between the cardiovascular and renal systems, as well as identify new targets for interventions to prevent complications.

7. Sanofi Symposium Focuses on Managing Type 1, the Importance of Language, and the Advent of TIR

Sanofi’s star-studded symposium provided a broad sweep of the state of type 1 diabetes, from diagnosis to management with up and coming technologies. Dr. Lori Laffel gave the opening address, emphasizing that over 40% of teens and young adults with type 1 diabetes had A1cs of 9 or higher in developed countries. High A1c can be especially problematic when it is persistent and turns into complications many years down the line. Dr. Thomas Danne led a discussion on the progression of type 1 diabetes from disease onset to adulthood and centered his discussion on the early prevention of CVD complications. He believes that digitization can lead to improved outcomes, but only along with increased education, CGM, and related technologies to more tightly manage glucose levels. However, we must not forget that language matters just as much as biology. Dr. Barbara Anderson stressed that it is important to consider cultural factors and avoid judgmental language when treating children (or anyone!) with diabetes. Especially in pediatric populations, Motivational Interviewing should be used to when speaking with patients and families following OARS (Open questions, Affirm, Reflect, Summarize) in order to help families understand the condition’s complexities and options. Though she maintains that face-to-face interactions are the gold standard for behavior change, virtual consultations and training programs with relational agents can also help education and guide patients when clinics are harder to access. Dr. Tadej Battelino wrapped up the symposium with a talk on the importance of time in range (TIR) to manage type 1 diabetes. As A1c doesn’t account for individual glucose variation, using CGM to find TIR is another option for gathering reliable data to advise diabetes care and improve quality of life. With this, the accumulation of data that CGM allows can significantly impact disease burden and cost savings when analyzed in exploratory studies to create novel, effective interventions.