Abbott reported 2Q18 earnings in a call led by CEO Mr. Miles White this morning. Get the press release here, and download the one-page earnings infographic here, which features expanded real-world data from 250,000+ FreeStyle Libre users. “Libre” was mentioned 12 times on the call – all very enthusiastically following yet another breakout quarter. Yes – standard of care is changing – not just CGM but also connected meters that help enormously in personalizing and individualizing diabetes management.

FreeStyle Libre User Base and Expected US Revenue

Mr. White shared that there are now “more than 800,000” FreeStyle Libre users worldwide, up an unprecedented 23% sequentially from 650,000+ users in 1Q18. Remarkably, this also means FreeStyle Libre’s global user base has doubled since >400,000 in 3Q17. Wow! Mr. White reiterated his previous estimate of reaching one million FreeStyle Libre patients by the end of the year, noting that the level of patient adoption is “unprecedented.” At this rate, adding ~200,000 new users by the end of this year seems conservative considering the uptake so far. Mr. White commented that Abbott is “investing heavily in capacity expansion.” Although he did not provide a geographic split for the user base, he mentioned during Q&A that “we like the geographic mix” of Libre users. Given that 2Q18 revenue share of growth was roughly 50/50 between US and international markets (53% US vs. 47% OUS), our model estimates that the 150,000 increase in Libre users was evenly split. With this reasoning, we’ve estimated ~125,000 US FreeStyle Libre users (up 150% sequentially from >50,000 in 1Q18) and ~675,000 OUS FreeStyle Libre users (up 13% sequentially from 600,000). For context, Dexcom’s worldwide installed base at the end of 2017 was 270,000+, meaning that FreeStyle Libre has more than double Dexcom’s global user base. See below for the user base growth to date and a projection through the end of the year, assuming users are added equally across the remaining quarters of 2018 and between the US and outside of the US.

FreeStyle Libre User Base Through 2Q18; Projections for End of 2018 Based on Today’s Call 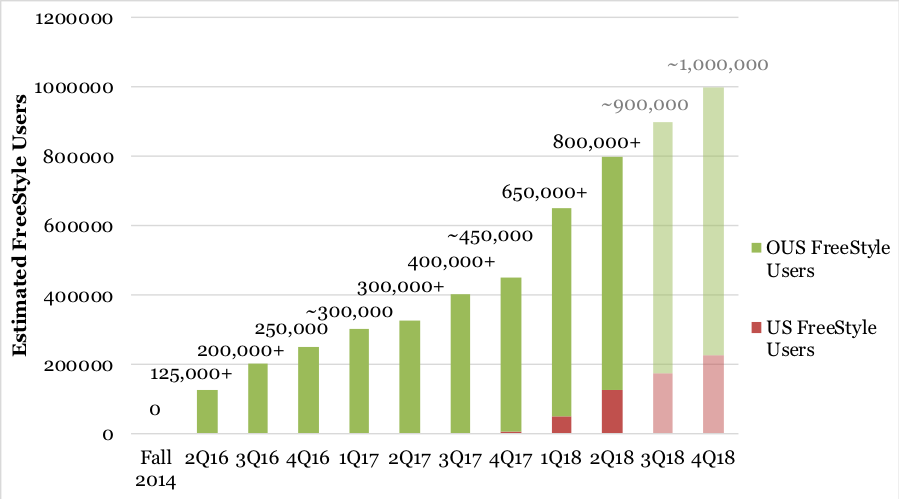 Mr. White described FreeStyle Libre with trademark optimism and excitement. We always look forward to hearing his commentary – see below for some our favorite quotes from the call.

Abbott’s global Diabetes Care business reported another fantastic quarter, with record sales of $470 million up 40% as reported and 34% operationally YOY. This standout performance came on a tough comparison to 2Q17 when sales of $336 million grew 19% YOY as reported and 21% operationally. As Mr. White proudly noted, Diabetes Care sales have exhibited over 30% YOY growth for the past three consecutive quarters, driven by FreeStyle Libre sales now humming along in the US and internationally. On a sequential basis, sales grew 12% from the previous record-high of $421 million in 1Q18 – impressive!

Record-high international sales of $358 million rose an incredible 32% operationally and 41% as reported on a very tough comparison to 2Q17 when sales of $255 million rose 21% YOY as reported (+25% operationally) – yes, in a year the OUS business has added $100 million to the topline, and it has seen positive YOY growth for the past ten consecutive quarters. Revenue rose 7% sequentially from the previous record high of $335 million in 1Q18, reflecting five straight quarters of consecutive sequential growth. The strong uptick demonstrates impressive, sustained global interest in FreeStyle Libre, which as of April is reimbursed “about two-thirds” of the time outside the US (on today’s call, Mr. White mentioned “very good” reimbursement in general). As expected with the large base of sales, sequential growth has started to taper a bit – from 2Q17-4Q17 the OUS market saw consistent double-digit sequential growth, but beginning in 1Q18 more modest single-digit growth has been reported. However, OUS growth has exceeded 35% for four straight quarters, meaning the business has accelerated relative to 2Q17, and from a higher base of sales. Now that the Dexcom G6 with zero-calibrations has received a CE mark and was slated to begin its launch in the UK and Ireland in June, we wonder how much competition it will offer FreeStyle Libre. Outside the US, the products are actually more competitive with each other, since FreeStyle Libre has its smartphone apps available (compete with G6), and Dexcom has no required receiver OUS (to compete with FreeStyle Libre).

Strong US sales of $112 million rose 38% YOY on a tough comparison to 2Q17 when sales of $81 million increased 11% YOY. This performance reflects three consecutive quarters of strong YOY growth, following the late November launch of FreeStyle Libre real-time in US pharmacies. Sales increased 30% sequentially, the largest sequential rise in US revenue since +32% in 3Q16, likely driven by pent-up demand for FreeStyle Libre plus Medicare reimbursement achieved in January. 1Q18 US revenue saw a 7% sequential decrease, likely more to do with seasonality than depressed demand .

1. “Planned” Enhancements for Libre Include “Some Already Available Overseas”

Mr. White shared in Q&A that “planned” FreeStyle Libre enhancements include some features “already available overseas,” likely referring to FreeStyle LibreLink (reader app) and LibreLinkUp (remote monitoring app), which as of February became available for iPhone and Android in 12 EU countries. We’re not sure if the FreeStyle LibreLink “suite” has been filed with FDA, though we view the value of doing so quite favorably, especially for patients (decreased hassle of carrying the reader; ability to share seamlessly data with caregivers and providers; and input for a FreeStyle Libre-centric data ecosystem of apps on the phone).

2. FreeStyle Libre Pediatric Claim Filed with the FDA and Under Review

Last week at Keystone, we learned that a FreeStyle Libre pediatric (4+ years-old) claim has been submitted with the FDA and is currently under review – great to hear, as the device is approved down to four years-old in Europe and is safe and effective in this population (SELFY). There was no mention of the indication on today’s call, although the news confirms timing shared in April that pediatric filing would occur this year. Abbott has three US pediatric FreeStyle Libre trials listed on ClinicalTrials.gov, all in the recruiting phase: (i) an accuracy study (n=85 6-17-year-olds) slated for an August completion; (ii) a post-approval safety study (n=400 4-17-year-olds) slated for February 2021 completion; and (iii) an accuracy study (n=100 4-17-year-olds) slated for a July completion. It’s unclear whether any of the data from these studies has already been included in the FDA submission.

3. No Mention of Bigfoot Partnership; US Pivotal Trial in 2Q19

No updates were provided on Abbott’s partnership with Bigfoot to develop a next-gen continuous communication CGM intended for automated insulin delivery with a pump (Loop) and MDI auto-titration with a Bluetooth-enabled pen cap (Inject). At Friends for Life Mr. Brewer shared that a pivotal of the Loop system will start in 2Q19 – more specific timing than previously shared (“2019”) – with a launch ambitiously maintained for 2020. The pivotal has been pushed back meaningfully from December guidance for a “2018” pivotal start, which was the timing we heard when Bigfoot and Abbott first announced the partnership last July. The Bigfoot slide at FFL implied a Loop “phased pivotal” would actually initiate in 2018, though this was not stated. Inject (MDI auto-titration) is also expected to launch in 2020.

There are at least 50 studies on “FreeStyle Libre” or “Flash Glucose Monitoring” on ClinicalTrials.gov, up from 42 studies in 1Q18. Studies added or updated since April are highlighted in yellow.

Mr. David Lewis (Morgan Stanley): Where is Libre relative to your plan and your comfort with $100 million in US Libre this year?

Mr. Miles White (CEO, Abbott): With regard to Libre, we can't be anything but pleased. It's going extremely well. We're on track with where we want to be in terms of patient acquisition and growth etc. There are no real market dynamics to compare ourselves to other than the acquisition of patients and we expect to go out of the year with over a million patients, which is unprecedented and unseen. We think [Libre] is a mass market product, as opposed to a very “niche-y” medical device type product, because there are so many people that are either insulin dependent or trying not to be insulin dependent. I think the opportunity here remains enormous. I think the growth is quite sustainable. There's quite a lot more to do to keep enhancing, and not only the products you're offering the market, and so forth. We like the mix of patients we're getting. We like the geographic mix. We like the geographic advancements. The reimbursement has been very good. Just about everything about this is going better than planned. So I think this is one of the key big sustainable growth drivers of the company.

Mr. Glen Novarro (RBC Capital Markets): Two questions on Libre. First, can you give us a little bit more color on the U.S. rollout and where you are with commercial coverage? And are you still comfortable with your Libre guidance for the year which in the U.S. I think is $90 million to $100 million?

Mr. White: Yeah, we're absolutely comfortable with the guidance for the year. We’re on track. I'd like to go even faster. As I've said before, we're even investing heavily in capacity expansion and so forth to anticipate even greater growth in the future. There’s really nothing to compare it to. There's I think the whole space is getting increasing attention.

We have carved out a very economic position that's extremely profitable for us, but we're in a very economically accessible price point which has made the uptake and the reception via the patient or even reimbursing bodies pretty attractive. And I think we've found a real value proposition point here with the product. Our manufacturing is extremely automated. It gives us a big advantage in terms of costs. And everything is kind of working well here. I'm pretty excited about this product. It’s got so much potential, because I think a lot of times whether it's a pharmaceutical or medical device they can be expensive in the healthcare system for recovery of cost because the numbers of patients may not be that great. And yet there's a lot of diabetics in the world including me. And other millions that are insulin dependent and millions that don't want to be insulin dependent. This product hits the sweet spot. To be a mass market product it's got to be accessible, it's got to be affordable, and it's got to be affordable in a way so that it's not hard for people to commit to it and use it and find out what it can do for them.

I'd say that's all going super. We like the split we're seeing a Type 1s versus Type 2s. We're probably globally about two-thirds type 1s and one-third type 2. I think that's a pretty good mix and it speaks to the clinical efficacy and the benefits of the products and the two different types of users that benefit from it. At this point it's all about how fast can we run. And I think the uptake by consumers and the retention – all of our data assess this is going well. We'll glad at the end of the year to have more than a million patients worldwide and significant number of US. Well, we're so far in the way a global leader in the space now.

There’s no way to look at market share. We've looked at sensor days and we’re already well above 90% globally. There’s nothing to compare to. We're comparing to ourselves and how fast we can run and that's really exciting. It's nice to see a product that has that kind of impact. And this one is just fun. It's just fun.

Mr. Novarro: Can you discuss what's next in terms of features for Libre and timing?

Mr. White: I could but I'm probably not going to set any expectations around that because I don't want to create trigger points or talking points. There are a number of things that we have planned and have done the work for. There are enhancements to the product – some obvious ones, some of which are already available overseas. It's a little different challenge working through the FDA here in this country. But yes, we've got plenty of enhancements and thoughts here for advancing the product still further.