BD provided its F3Q18 (2Q18) financial update in a call this morning led by CEO Mr. Vince Forlenza. See below for our top takeaways from the call, as well as relevant Q&A. Get BD’s slide deck here.

1. Swatch Type 2 Patch Pump “On Track” for Limited Launch in “Late FY19” (by September 2019); US and EU Regulatory Submission “Later this Year”; Cost “More at Parity” with Pen Therapy

During prepared remarks, Mr. Forlenza noted that the Swatch patch pump for type 2s remains “on track” for an initial limited launch in “late FY19” (by September 2019). For the first time, he anticipated regulatory submission in both the US and EU “later this year” – an important update and a clear sign the product is moving as expected to commercialization. Mr. Polen emphasized that Swatch has been specifically designed for type 2 diabetes patients “both from a feature set and extreme ease of use,” asserting that the “extreme simplicity of the user interface on the digital side and on the hardware side” differentiates Swatch from other patch pumps. He maintained that while Swatch lacks the “bells and whistles” that a patient with type 1 diabetes might want, it allows a cost position “very targeted” for type 2 patients. Mr. Polen maintained the expectation that the cost of Swatch will be “much more at parity” with pen therapy than “the premium typically associated with pump therapy.” Not surprisingly, Swatch’s low-cost proposition has garnered “a lot of excitement from payers.” There was no mention of pharmacy distribution for Swatch (shared in the May call), though this is the obvious play given BD’s expertise with pen needles and precedent with Valeritas, increasingly Insulet, and Abbott. Distribution through the pharmacy channel would be a big convenience win for patients/HCPs and potentially further enable lower patient out-of-pocket costs vs. traditional pumps through DME. It’s great to see BD prioritizing low cost in targeting the type 2 segment.

While not mentioned during the call, BD initiated the “preview release” of version 1.4 of its Briight app in June (App Store: 4.2 stars/9 ratings; Google Play: 4.8 stars/16 ratings). The “personal diabetes assistant” is very cool conceptually and has huge investment behind it from BD’s Digital Health team. At this point, Briight is still early and focused on proper injection technique and barriers to insulin. The automated chat interface (“Ask Briight”) is integrated with CalorieKing’s database to identify macronutrient content and has an expanded ability to answer some food questions. Eventually, Briight will potentially play a role in supporting people with type 2 diabetes who use Swatch – the pump handheld will send data to the phone, and Briight will presumably leverage the insulin data, send it to the cloud, and likely include content to teach operation of the patch pump. We’d also speculate the app could be used to control Swatch at some point in the future, rather than a dedicated, wireless handheld controller; no plans have been shared on this front. Per Mr. Polen’s JPM comments, BD anticipated launching Briight with Swatch, though clearly Briight is ahead of things with the quiet release and a full launch in ~September 2018. Integrated with Swatch, the Briight platform could help drive competition with Insulet’s greater focus on apps with Dash and the Lilly U500 and U200 Omnipods.

The Medtronic-partnered MiniMed Pro-set with BD FlowSmart technology was not mentioned during prepared remarks. A question on the Pro-set was bundled in with a question on Swatch, but management only addressed the latter (see below). Last we heard nearly a year ago, the set was slated to launch by September 2018, although it was once again notably absent from the slide listing FY 2018 (October 2017-September 2018) planned product launches. In the best-case scenario, the slide might have only included key initial launches, excluding what is technically classified as a re-launch. At JPM, we heard that a study is still finishing as the company works to aggregate clinical evidence. Mr. Forlenza shared at JPM that BD remains in active dialogue with Medtronic regarding the infusion set, but it is now close to one year since we’ve heard any timing updates. The commercial fate of this set rests in Medtronic’s hands, but with Medtronic working to meet 670G demand in the US (now approved in those down to seven years-old), launch the 670G in 10 EU countries this fall (CE Marked in June), and the very strong Unomedical/Medtronic MiniMed Mio Advance there are definitely questions here on the commercial side too. Mio Advance is very strong competition – the all-in-one, fully disposable insertion set with a hidden needle launched in Europe at ATTD, though no US timing has been shared. How Medtronic will prioritize these two products is unclear, but from our perspective, the insertion experience with Mio Advance is superior to that of the Pro-set. The benefit of the FlowSmart side-ported catheter is harder to quantify at this stage. 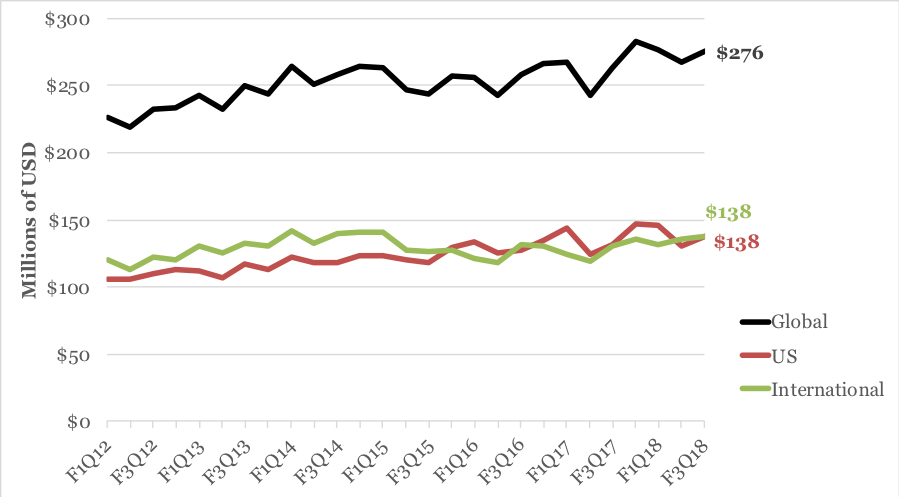 International sales of $138 million were flat operationally and rose 5% as reported on an easy comparison to F3Q17 (+1% operationally, -1% decline as reported).This performance marks four straight quarters of flat/positive YOY growth internationally. OUS revenue increased 2% sequentially from a very strong base of $136 million (the highest recorded in our model since $141 million in F1Q15) in F2Q18 (1Q18). International sales drove 54% of 2Q18’s YOY growth – down a bit from the 71% share of global growth in F2Q18 (1Q18) when OUS sales were up 14%.

US revenue of $138 million climbed a strong 5% YOY on a moderate comparison to 4% growth in F3Q17 (2Q17). Sales increased 5% sequentially from a base of $131 million in F2Q18 (1Q18), recovering from two consecutive quarters of sequential declines. The US market remains a consistent source of solid revenue for BD, with YOY growth or flat sales reported in nearly all of the past 33 consecutive quarters (~eight years) – a 1% decline in F2Q17 (1Q17) being the lone exception. US sales drove a fairly equal share of YOY growth, coming in at 46% of 2Q18 Diabetes Care growth.

Q: On the type 2 diabetes patch pump and the infusion set with Medtronic. These two have significant potential. Can you give us any more in terms of the go-to-market strategy with the type 2 pump? Any details around the product or how it compares to some of the other patch pumps out there? And is there any ability or willingness to take this into the type 1 market?

Mr. Thomas Polen (President, BD): For Swatch, we continue to be very excited about the potential of that product. And we continue to make good progress. We are progressing our clinical trials as we had shared in the past. We’ve just completed the analysis of an in-human insulin infusion trial. And that went exactly to plan for us. It was very positive response from patients on its ease of use and overall performance.

We’re actually preparing to start-up our next in-home safety trial, again using insulin. And we're making good progress overall, gearing up our manufacturing. We've moved that to our Ireland location, which is going to be the permanent manufacturing location. And we're building our commercial plans at this point in time.

[Swatch] has been designed specifically for type 2 patients, both from a feature set and extreme ease-of-use. What really differentiates this product from other types of patch pumps, we think, are the extreme simplicity of the user interface on the digital side and on the hardware side.

We've designed [Swatch] to not necessarily have all the bells and whistles that someone with type 1 would want, but that's also allowed us to have a cost position that is very specifically targeted for type 2 patients. Think about a cost position that's much more at parity with pen therapy than a significant premium that's typically associated with pump therapy. And that's one of the core value propositions that we hear a lot of excitement from payers on as well.

Mr. Alberto Mas (Executive Vice President, BD): We are really advancing very well. Our production preparedness is on track. And we'll be ready to go with a good ramp up for the product from a production perspective. We are expecting to submit our submission for type 2 patch pump later this year, around that time.

Mr. Vince Forlenza (CEO, BD): Going towards type 1 would make no sense with the features that we have. And that's key actually to the regulatory strategy that we have, that this is focused on type 2 patients. But longer term, think about this as maybe with other drugs for the home, not in the short run, but that's where there's possible market expansion. We're already talking to pharma companies about that.

Mr. Polen: We do have our Pharmaceutical Systems business, which does take devices from other business units and applies them for other disease states by selling those to other pharma companies. And so we have signed our first deals on a B2B basis with that product. And we think there's more opportunities there ahead. We really see an opportunity to leverage the platform, not only through our Diabetes Care business, but also through our Pharmaceutical Systems business unit, where we have relationships with essentially all of the top pharma companies.

Q: On the diabetes side, would you ever consider collaborating with a CGM company to automate insulin delivery in intensively managed patients who potentially could be using your pump?

Mr. Polen: Yes, we would over time certainly look at CGM being integrated into the algorithms and collaborating with those types of organizations.