Diabeloop obtains CE mark for hybrid closed loop, plans to launch in France in early 2019; Kicking off new round of funding – November 9, 2018

Diabeloop announced this morning that it has received CE marking for its hybrid closed loop system (“DBLG1”), which we learned at DiabetesMine will launch with the Kaleido patch pump (what’s that? here’s our take on Kaleido from EASD 2015 and 2016 and 2017 as well as CES 2017), Diabeloop’s locked-down Android controller, and Dexcom G6.

Management expects a gradual launch in France early next year to align with availability of Dexcom’s G6 (an update to the existing CE Mark is required) ahead of broader scaling in 2Q19. This is a delay from the end of 2018 launch plan, but a great move to launch with G6. Giving users the option to use a Cellnovo patch pump in the system is on the “roadmap.”

Diabeloop will start with some “selected centers” in France, potentially also including other geographies where physician demand for the system is high. We last heard the system would also launch in the Netherlands and Sweden in 2018, although management is currently in the process of “re-evaluating” which markets to enter after France, particularly seeking countries in which there is an appetite for innovative medical devices and fluid reimbursement mechanisms exist.

The algorithm is not embedded in the pump, so if the Android handheld is out of range for more than 25 minutes, the pump reverts back to a reference basal rate. Users can adjust the algorithm target between 100-130 mg/dl, a big advantage over 670G. There is also a “Zen mode,” which “virtually ensures” hypoglycemia avoidance over a short time period – cool! Remarkably, ~75% of users stop counting carbs with the system, presumably doing more qualitative meal announcement.

Depending on geographic cadences for Medtronic and Tandem, Diabeloop is likely to be the second hybrid closed loop system to market in most EU countries – it could feasibly be first in France. Medtronic has officially initiated its OUS 670G launch in geographies such as the UK, Belgium, and Spain. For Tandem’s part, respective launches of Basal-IQ and Control-IQ (both with Dexcom G6) are expected in “early 2019” and ~2020. Diabeloop takes numerous calls per day from patients expressing interest in getting on DBLG1, and we’re excited to see hear the market’s feedback given the strong clinical data. Obviously Diabeloop will face larger companies with more commercial experience, and there is some risk to partnering with two small, slow-to-ramp pump manufacturers.

As we noted at DiabetesMine, the Diabeloop team is ~55 people, and the algorithm has been tested for over 6,000 patient-days and presented in 34 orals/abstracts/papers (most recently at ADA). 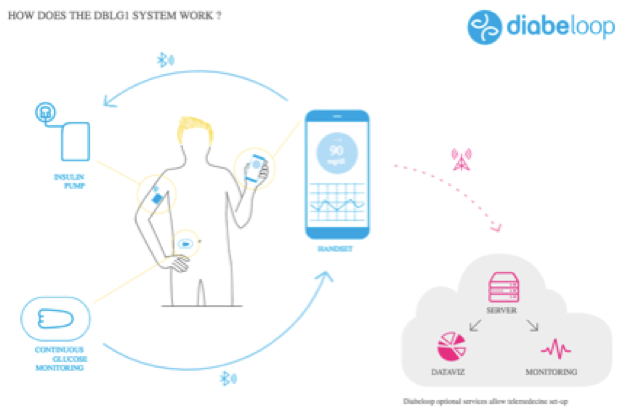