The table below reflects the latest updates, as far as we are aware, on Lilly’s diabetes pipeline products. Items highlighted in yellow indicate changes to the pipeline in 1Q19.

On Trulicity and GLP-1

Q: How should we be thinking about net pricing and the overall pricing environment for Trulicity in 2019. Were there any one-time impacts or rebate effects for Trulicity this quarter?

Mr. Enrique Conterno (President of Lilly Diabetes and Lilly US): Allow me to provide some color on Trulicity's overall performance. We continue to be very excited about the underlying business fundamentals of the product. When we look at volume growth, we are basically the beneficiary of very strong share growth. We're now sitting at 46%, which is an all-time high for Trulicity, and with the tailwind of very significant class growth now sitting at 30%. Something to note is when we look sequentially at volume, while scripts basically increased for Trulicity from 4Q18 to 1Q19 by about 5% – 6%, our actual shipments declined by 7%. So I want to make sure that we're looking at the underlying business fundamentals and not necessarily just some shift in retail or wholesale or inventory dynamics. When it comes to pricing, there hasn't been a steep change when it comes to pricing. Of course, we see pricing pressures across all diabetes categories, but it's important to note that our price this quarter was comparable to our price in Q4 of 2018. What we basically see in terms of pricing relative to Q1 of 2018 is high rates when it comes to managed care and rebates, growth in highly rebated segments, whether it's the Department of Defense, VA, and so forth. And then we also had a negative impact due to changes in the estimates for rebates and discounts.

Q: On the REWIND data for Trulicity coming up at ADA, without front-running the data, can you just talk about your level of excitement? Do you think the prescriber community is going to say wow, that's really a game-changer?

Mr. Conterno: We continue to be excited about the REWIND results for Trulicity. I'm going to have a plug here for my investor relations colleague and say that we're planning an investor call at ADA after the disclosure of the REWIND results, so we hope to either see you there or hope that you can either connect or be there in person.

Q: On Trulicity, I just wanted to ask your view on the class growth differences in the U.S. versus OUS and how durable this is. I know this has been a big driver independent of the share gains that Trulicity has gotten over the years.

Mr. Conterno: When it comes to Trulicity class or GLP-1 class growth, I think we see the same dynamics in most markets. The drivers are similar, which is the updated guidelines that were recently released. So when we look outside of U.S., GLP-1 class growth is in the mid-20s. Given the maturity of the class in the U.S., it is impressive that the growth in the U.S. is even higher than that, but it's very exciting to see. As a corollary to that, I think Trulicity's performance is very consistent across many markets.

Q: With respect to Trulicity, you said that Rx increased sequentially by 5% to 6%, but actual shipments declined by 7%. So does that mean there was an inventory work-down of 12% to 13%? And could you also quantify the negative dollar change in reserves?

Mr. Conterno: Whenever we look at sequential growth, there's what I call colloquially a double-whammy effect, so we could be double-counting here. It does not simply add up. One good way to think about it is just if we were to shift 5% of the units from Q4 to Q1, that explains 10 percentage points of difference, but in reality you're only shifting of 5% of units from one quarter to another. That's a long way of saying that I will halve your estimate. We don't have full visibility into the retail inventories, but my assessment is about six points.

Q: One of the concerns with the upcoming REWIND readout is that the benefit might be driven by the 30% or so of patients in the trial with pre-existing cardiovascular disease, and that the remaining patients add little to the overall outcome. So overall, the benefit might be a solid but unspectacular 20% or so reduction in risk, which won't offer opportunity for differentiation. Can you tell us not to be concerned about this point?

Mr. Conterno: We are unable to provide additional comments on REWIND, but we look forward to seeing you at the conference call.

Q: In Q1 of this year, how much of the lower price with Trulicity was related to Medicare Part D donut hole changes versus other rebate-related changes? Is that a one-time impact for accrual accounting-related issues, or is it something that we should be thinking about as continuing on going forward? Where is the GLP class going in terms of pricing? Is there going to be continued pricing pressure over the next couple of years? (Editor’s note – we were somewhat surprised that any analyst in the current environment would ask the last question.)

Mr. Conterno: First to address the question about the donut hole, the donut hole becomes a little more important in Q2. I don't have the numbers in front of me, but in the case of diabetes medicines, maybe Q1 is only about 10% of the overall donut hole from an accounting perspective of what we're going to see throughout the year. When we think about Trulicity, while there was some impact of the donut hole, it was not material to the pricing result. As I mentioned, when we look at Trulicity, we do have higher rebates in managed care and so forth relative to Q1 of last year. The changes are due to changing estimates for rebates and discounts, so yes, that is basically changing because of how we had accrued based on a full review of the claims that we received later, basically changes to the information that we have on hand, and we need to account for that as soon as we know that information. That is a particular impact that was from other quarters that basically is impacting this particular quarter.

Q: As we think about the evolving competitive landscape in the insulin space, we've seen Admelog take up quite a bit of share in a short period of time, and then there's also the threat of potential biosimilars reaching the market in the next couple years. How does that potentially impact your portfolio as it relates to Humalog and long-acting insulins going forward?

Mr. Conterno: Clearly, there are new competitors in the insulin space. In the case of Admelog, it's important to reflect that most of their share gains really have been driven in managed Medicaid. When you look at Humalog outside of managed Medicaid, our overall scripts are basically flat. Clearly, there's an evolving landscape when it comes to insulins with the potential entry of other insulin follow-ons. As you know, the insulin categories are going to be transitioning to being regulated as biologics in the 2020 timeframe. Clearly, there are questions about interchangeability and when it does going to play out. As we said in the past, we don't view interchangeability as something imminent. We eventually think this is going to happen, but there needs to be more clarity. So this is likely something that won't happen before 2021. Now, it's difficult for us to predict when insulin follow-ons will come into the market, in particular in the U.S., given that some of these products have expressed certain expectation when it comes to launch timelines but have been delayed.

Importantly to note as well is that we continue to evolve our overall insulin strategy. And we like to say that we are reimagining insulin systems and insulin delivery by basically bringing Connected Care platforms to be able to improve patient outcomes in a much more meaningful way. So, we're excited about our overall innovations with systems and Connected Care, but also bringing new insulins like our Ultra-Rapid insulin Lispro that we're developing.

(Editor’s note – we view interchangability as an evolving story. Many patients do not want this because they want to “choose” the insulin they get; on the other hand, interchangability obviously contributors to cheaper insulin. We also note management’s focus on care delivery – it’s not just the new R&D that is focused on above, it’s also the delivery of the molecule.)

Q: On tirzepatide, it's good to see the program formally extended in obesity and NASH. Regarding your Phase 3 obesity trial, could you give us a little bit more color in terms of the outcomes you're looking for, the competitor you are using, and the potential readout? And you mentioned you also have dose titration data to be presented at ADA. Can you comment on the extent to which that data shaped your dosing for the Phase 3 trials, particularly the high dose?

Mr. Conterno: We are very excited about tirzepatide and being able to start our phase 3 type 2 diabetes study and pursuing both obesity in phase 3 and NASH in phase 2. We are not providing additional color on the specific obesity trials that we are conducting. Clearly, we need to have the appropriate discussions with the FDA as we engage in this phase 3 trial, but we plan to do that sometime in the future. And as far as the titration question, yes, we do plan to have a presentation at ADA looking at some of the additional titration data for tirzepatide.

Q: Could you comment on the timing and the impact of the proposed rebate reform on your diabetes business, especially on the near-term impact for realized pricing because of the Medicare math, assuming it does get implemented at the beginning of next year.

Mr. Conterno: The biggest impact from the proposed rebate rule will really be at the patient level, because patients will have access to medicines at more affordable prices. If you project that forward, I think what we will see is better adherence, which is something that we all want in health care. So the impact that is not often talked about is really on volume. When it comes to some of the mechanics of the change, I view it pretty neutral overall.

Dr. Dave Ricks (CEO): We are planning for implementation on January 1st. There is clearly volume upside. The thing one might worry about is rate compression. Presumably you'd have more facial and transparent pricing, but I think across our portfolios because of the high consolidation on the payer side, the rates are pretty compressed already. There aren't big differences between what the payers are paying, so that's why we lean into this one. We think it's the right policy answer to help seniors with medication costs and to shift the debate from list pricing to net pricing, which we see as in our long-term interest. I do think once Part D changes, you will start to see increased interest from payers that are not government systems or commercial payers to have similar benefits particularly in chronic disease where list price effects have a lot of distortion and increased out-of-pocket costs. We have all heard the outcry on this surrounding insulin frankly. 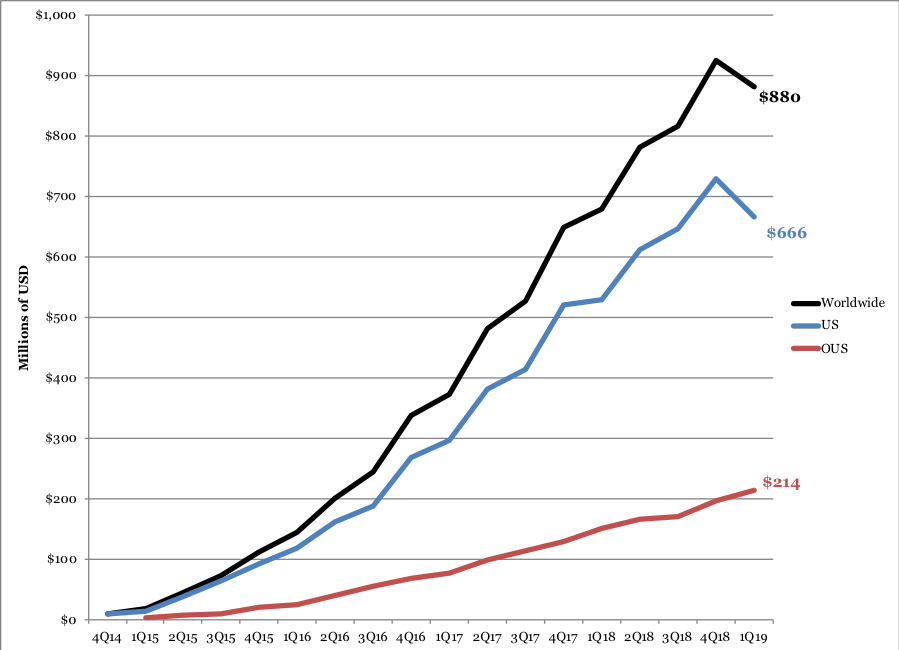 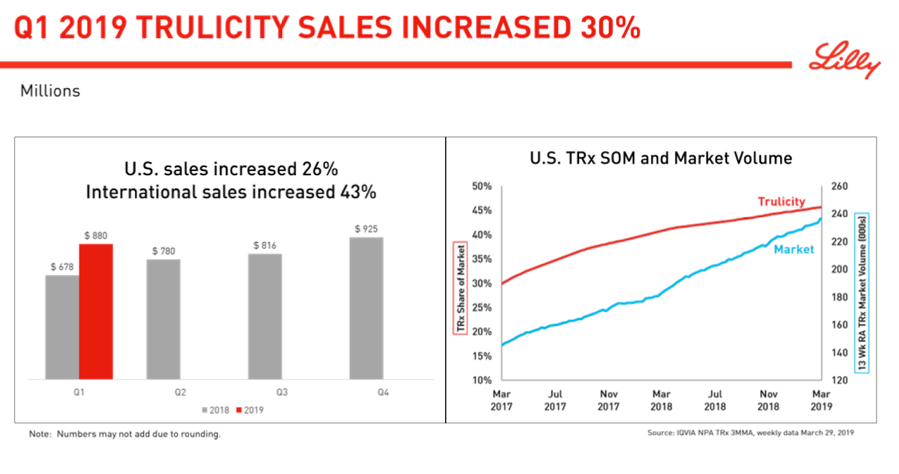 Lilly reports only its own share of Jardiance revenue. We estimate total Jardiance revenue, BI’s share included,  based on figures from a 2015 BI update stating $60 million in Lilly revenue and $183 million in global net sales (a ~33% share for Lilly). 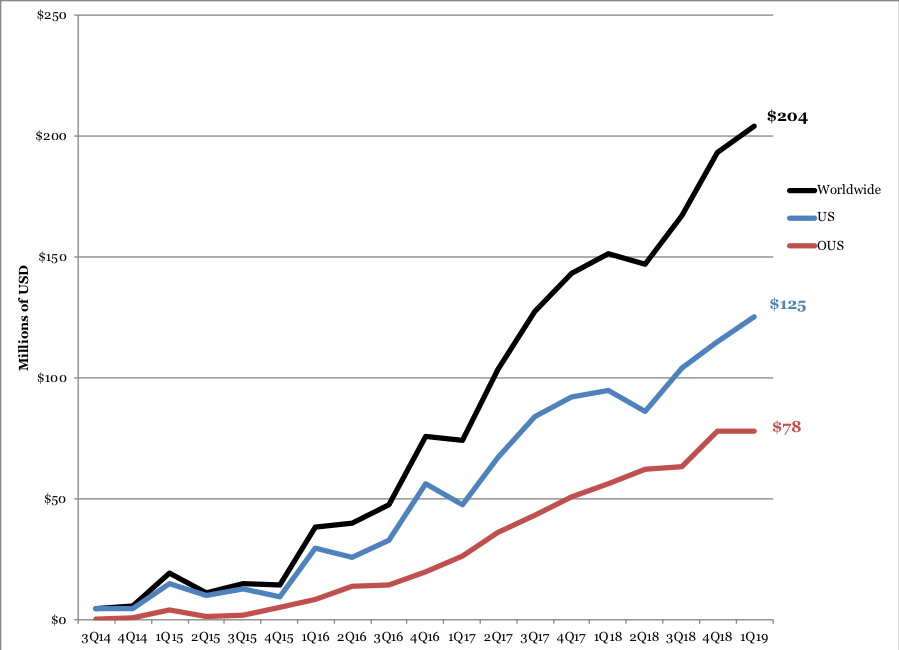 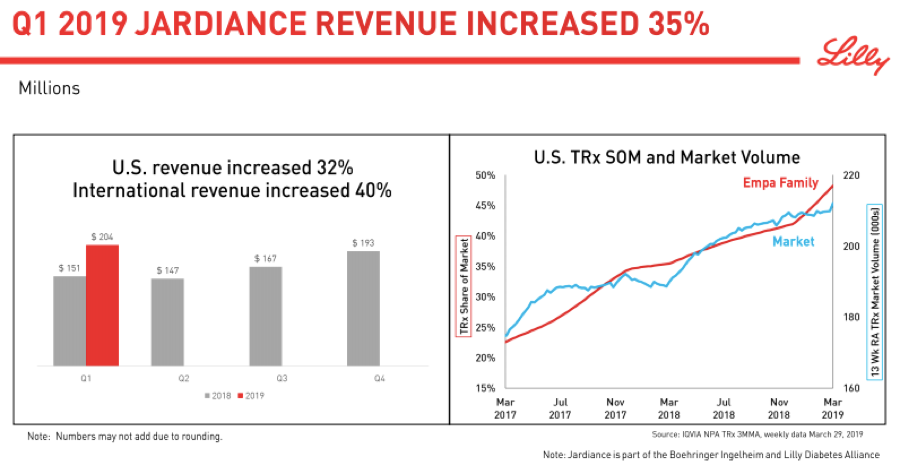 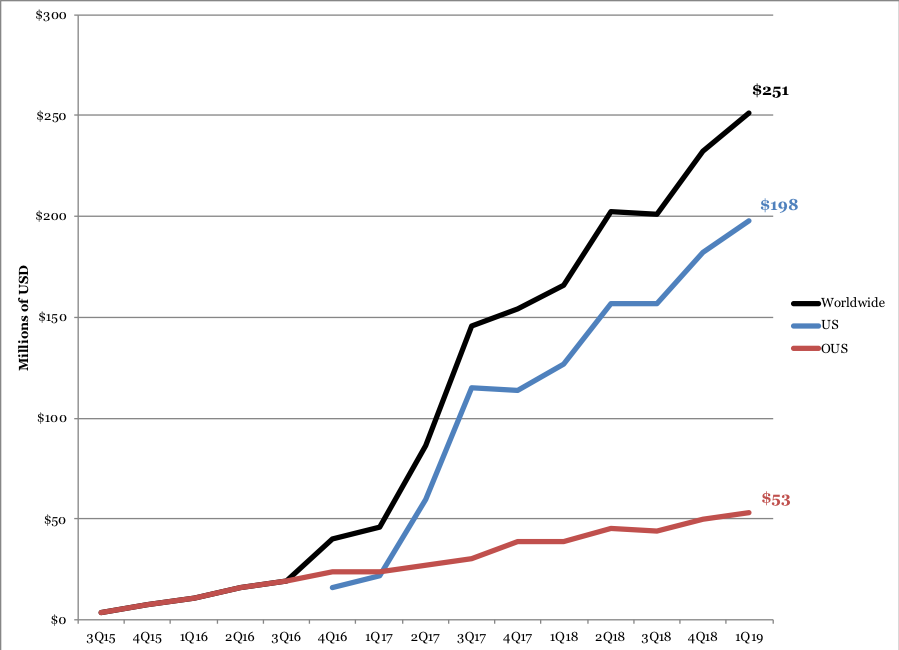 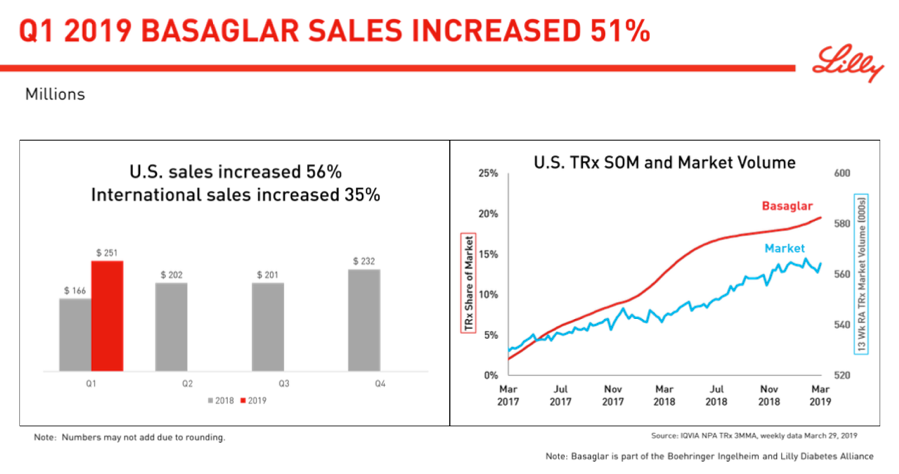 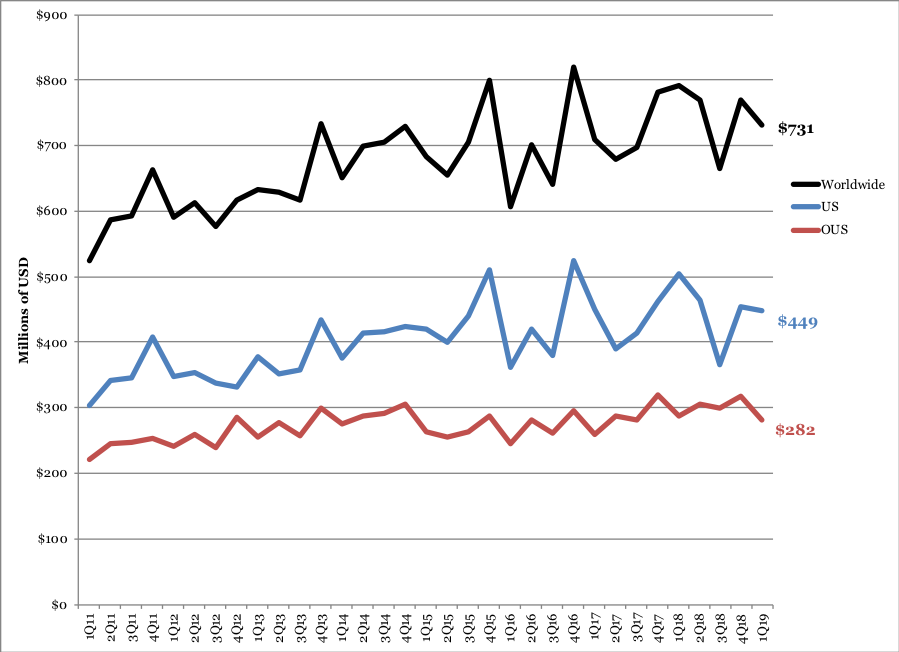 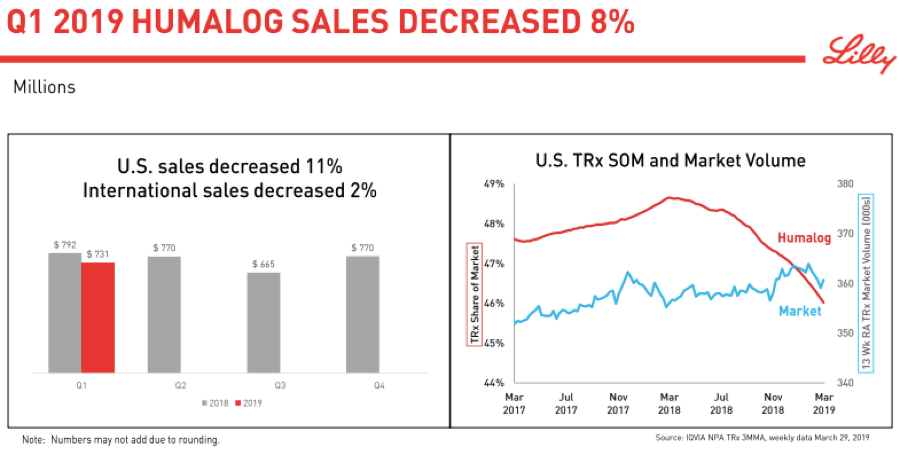 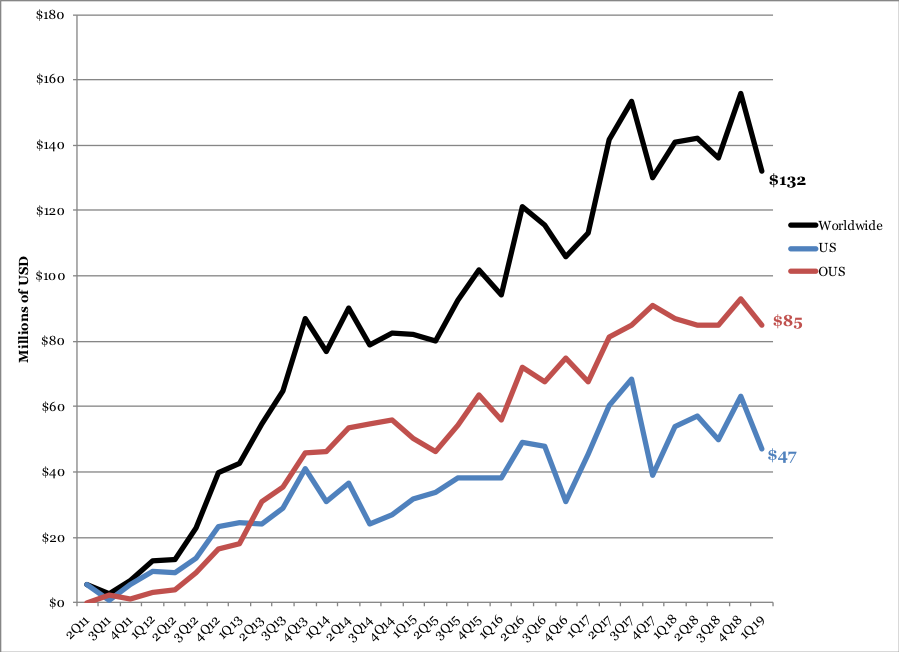