We are in Chicago – Carl Sandberg’s “City of the Big Shoulders” – and the learnings from CMHC 2019 aren’t letting up. See below for our top highlights from Day #2.

For the full rundown of our top highlights from Day #1—including Dr. Joshua Stolker on GLP-1 CVOT data and Dr. Eric Peterson on big data—see here.

In an engaging talk on initial simultaneous combo therapy vs. sequential therapy, Dr. Julio Rosenstock passionately argued for the former and outlined his vision of initial metformin + SGLT-2 inhibitor +/-  Oral GLP-1 RA combo therapy in newly diagnosed type 2 patients regardless of baseline A1c. Dr. Rosenstock pointed out that despite the vast treatment options in the diabetes therapy armamentarium, too many patients are still not reaching A1c targets (>50%). He posited that an over-reliance on sequential therapy, rather than more aggressive and personalized combination therapy at the start of treatment, is likely contributing to this phenomenon. See below for some of the top takeaways from Dr. Rosenstock’s powerhouse talk, which covered over 70 slides in just under 45 minutes!

Toronto expert Dr. Daniel Drucker delivered a punchy keynote address on GLP-1s, documenting benefits of the class compared to DPP-4 inhibitors and SGLT-2s, as well as potential mechanisms of action. Throughout Dr. Drucker’s talk, one central theme was clear – GLP-1s share a strong and unified class benefit (MACE, particularly all-cause mortality, etc.), but the mechanism behind these effects is complex and not well understood. During the talk’s introduction, we also learned that Dr. Drucker is the 2019 laureate for the Harold Hamm Prize for Biomedical Research in Diabetes (a very important and major prize in the world of diabetes), so a huge congratulations to Dr. Drucker and his impressive body of research! See here for more details on when this will be presented in Oklahoma City. And, read on for our top themes from the presentation.

3. Dr. Anne Peters on “Moving Beyond A1c: Diabetes Devices, and their Clinical Use”

In this talk, Dr. Peters led a wide-ranging discussion on interpreting A1c with the benefit of time-in-range data; she also made several references to automated insulin delivery that showed what a game-changer this has been for some of her patients that have been lucky enough to get it. Her discussion underscored how fast work on “time-in-range” has all moved – experts only met at ATTD in Berlin earlier in 2019 to determine goals for patients and then ensuing work was synthesized that was published in Diabetes Care in June 2019: “Clinical Targets for Continuous Glucose Monitoring Data Interpretation: Recommendations From the International Consensus on Time in Range.” Although there are not official programs that we know of to spread education on time in range with HCPs and patients, we were very intrigued by Dr. Peters’ discussion on Ambulatory Glucose Profile and moving toward a greater time in range and how patients see it. She also discussed at some length how patients from different socioeconomic means used various devices and pointed out deficiencies in A1c in certain ethnic groups.

On A1c and Its Limitations

On Interpreting Time-in-Range and AGPs

On Disparity in Outcomes

Dr. Jay Skyler provided a very systematic, robust, and valuable overview of diabetes CVOTs and outcomes studies that have read out since CMHC 2018 – five major studies including CAROLINA, CREDENCE, DECLARE, PIONEER 6, and REWIND. In the process, we heard some notable points of commentary from Dr. Skyler on these trials and general trends in the field. Notably, we were excited to hear Dr. Skyler differentiate renal outcomes seen in trials for SGLT-2 inhibitors and GLP-1 agonists – a topic we’ve heard increasing commentary on following landmark CREDENCE results presented in April 2019. In reviewing results from the REWIND CVOT of Lilly’s once-weekly GLP-1 Trulicity (dulaglutide) which read out at ADA 2019, Dr. Skyler commented on secondary endpoints in the trial that focused on renal-related outcomes: “I don’t put as much faith in [these endpoints], since a lot of it is new macroalbuminuria. I think that’s a softer endpoint that was used. As a result, I don’t put as much personal ‘credence’ in it as the CREDENCE study, which had much harder endpoints used.”

By contrast, CREDENCE showed a 30% relative risk reduction (95% CI: 0.59-0.82, p=0.00001!) on the primary renal endpoint of ESKD, doubling of serum creatinine, and renal or CV death. Our sense from broader KOL discussion of renal endpoints with these two therapy classes is that the impact SGLT-2 inhibitors have had on “hard” renal endpoints (such as reducing eGFR decline) that are more clinically relevant have inspired more confidence in their utility in practice. Dr. Skyler’s comments nicely align with other recent KOL commentary we’ve heard on the subject, including that from Drs. David Cherney, Per-Henrik Groop, and Hiddo Heerspink at EASD 2019, where each of these luminaries made similar points to Dr. Skyler.

Longtime diabetes expert Dr. Edward Horton (Joslin Diabetes Center) gave a wonderfully organized talk on evidence in lifestyle interventions to prevent diabetes and the metabolic syndrome, ending with a lengthy and enlightening Q&A with Dr. Horton’s recommendations based on his 60 years of experience in the field. At the end of the Q&A session, the former president of the ADA casually announced, “That was my last talk,” prompting rousing cheers and applause from the audience. His full 63-slide presentation is available here, and well worth close examination. 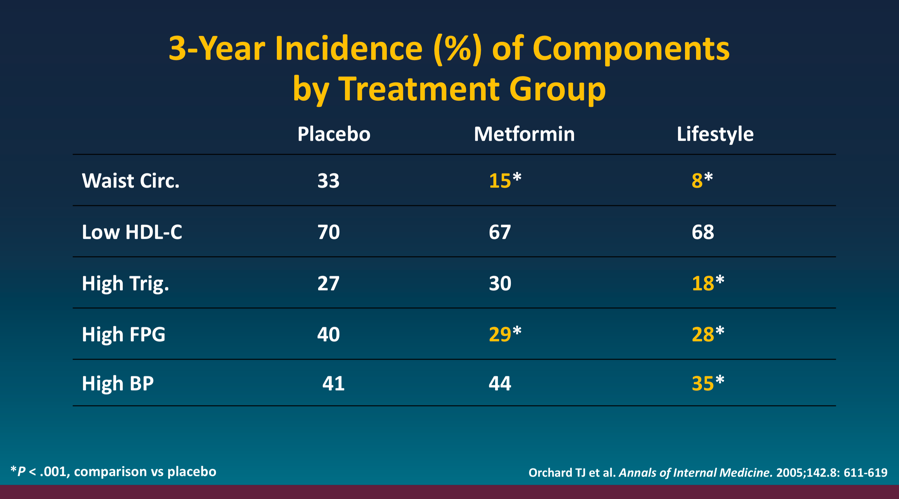 Q: I have trouble convincing my patients to do change their lifestyle. Do you have any secrets for that?

A: You’re not alone – this is a major, major problem: how do we work with our patients to adopt and maintain a lifestyle program? This is where our diabetes educators are great; they see people frequently. Work with your diabetes educators, have patients come back and review things with them. It is very, very difficult, my patients are busy - they’ve got tons of things on their minds … I just try to build exercise into their daily activities, but it is a challenge.

Q: I was wondering about the dietary advice in the studies - they happened in the 1990s and early 2000s. Specifically, with regard to advice on carbohydrates, e.g. simple vs. complex, and types of fats: any thoughts?

A: There’s a ton of stuff going on now about what the proper dietary composition is. I think we’ve always recommended a good, adequate source of fiber. I think for people with diabetes, we tend to reduce the carbohydrates, or at least really emphasize complex carbohydrates over sugars, just to avoid post-prandial spikes. What the proper diet is will vary from one person to another, but the biggest thing to me is cutting calories – reducing between-meal snacks, nighttime snacks. I’m much more interested in reducing total caloric intake as part of the diet. One of the biggest problems we’ve had is with sweetened beverages, with high sugar content. I generally tell patients to avoid saturated fats in their diet, reduce calories, and make sure they’re getting enough whole grains and fiber.

Q: I’ve heard that high intensity, interval training improves glycemia and metabolic risk. I tell my patients, “Less is more” and “failure is success”: less time, but higher intensity – to muscle failure. Can you comment on walking vs. short, high intensity workouts?

A: Again, every patient’s a little different in what they tend to do and what they like to do. Stretching exercises, maintaining mobility is big for our aging patients. I think strength training, resistance, exercises are very important for maintaining muscle mass, but cardiovascular-wise, I think walking and cycling. I think you have to consider both types of exercise.

Q: What is your opinion on group sessions and group exercise trainings?

A: I think many people find that participating in a group is very helpful, because they interact with people and it’s easier for them to be involved in group sessions. It’s also good motivation.

In a talk on notable recent studies within the obesity landscape, Dr. Robert Eckel directed the audience’s attention to a recent study published in JAMA, “Association of Metabolic Surgery With Major Adverse Cardiovascular Outcomes in Patients With Type 2 Diabetes and Obesity.” The retrospective cohort analysis looked at 287,438 type 2 patients in the Cleveland Clinic Health System between 1998-2017, with 2,287 patients who had metabolic surgery matched 1:5 to 11,435 nonsurgical patients with type 2 and obesity. The objective of the study was to investigate the relationship between metabolic surgery and incident major adverse CV events (a 6-point MACE was used that included all-cause mortality, coronary artery events, cerebrovascular events, heart failure, nephropathy, or atrial fibrillation). Results were highly favorable for the surgical group, with a 39% RRR compared to nonsurgical controls on the primary composite endpoint (consistent across each of the individual components of the composite endpoint), and with highly significant secondary endpoints as well (see figure below).

Results were also highly consistent across various subgroups, with no heterogeneity based on sex, age, BMI, baseline A1c level, eGFR, or use of insulin, sulfonylureas, or lipid lowering medications. The study’s authors postulate that the mechanisms driving beneficial effects on MACE with surgery may be related to substantial and sustained weight loss, along with improvements in metabolic, structural, hemodynamic, and neurohormonal abnormalities. Moreover, they also posit that “some of the beneficial metabolic and neurohormonal changes that occur after metabolic surgical procedures are related to anatomical changes in the gastrointestinal tract that are partially independent of weight loss” – we’re extremely curious to learn more about these weight-independent effects that may be contributing to improvements in MACE outcomes. Of course it’s crucial to acknowledge that these results, while encouraging, are only hypothesis-generating given the study’s observational nature and lack of randomization. 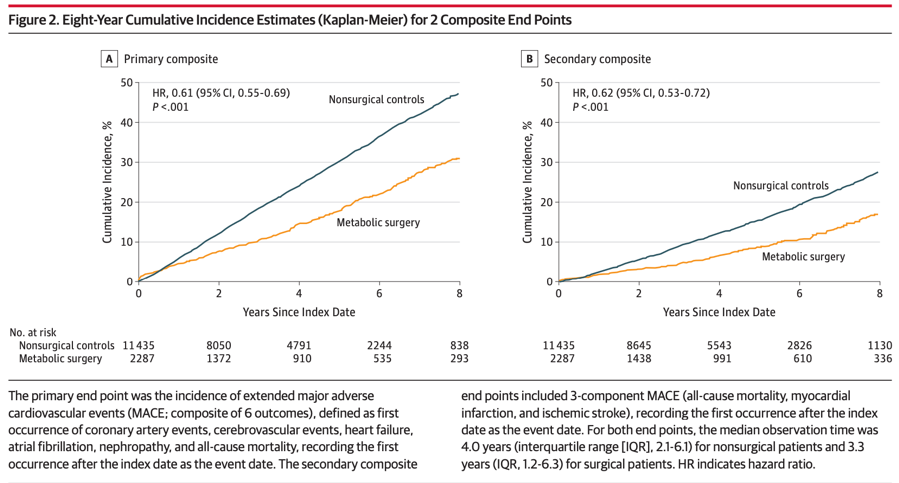 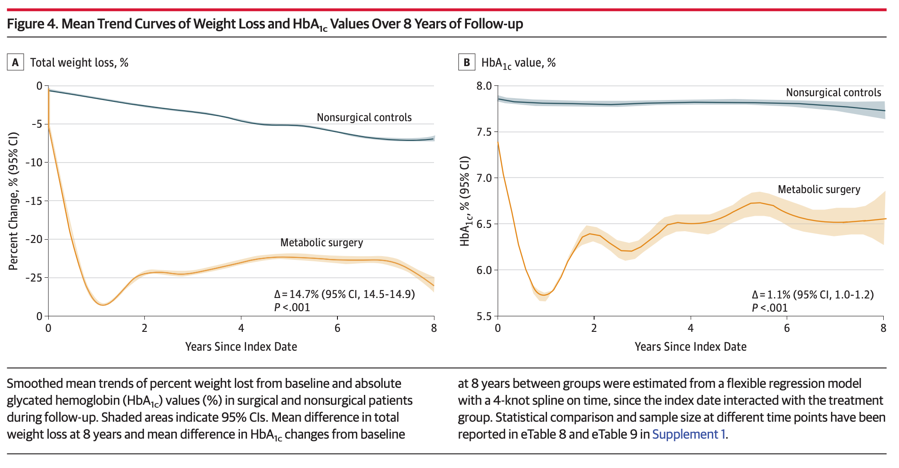 7. Dr. Irl Hirsch’s Call-to-Action: “We Can’t We Can’t Under-Emphasize the Role of Insulin in Today’s World of CVOTs”; Asks for Reclassification

With his signature enthusiasm, University of Washington’s Dr. Irl Hirsch gave a most valuable presentation on what he characterized as an often-overlooked role of insulin in the management of type 2 diabetes. In the US, 13% of patients with type 2 diabetes use insulin with other agents, and 14% use it alone, coming in at a substantial seven million individuals on top of the 1.5 million with type 1 diabetes. As an exercise, Dr. Hirsch polled the audience, asking “why is there so much excitement for type 2 therapies in 2019?” Overwhelmingly, the audience voted for “positive CVOTs with GLP-1s and SGLT-2s” over other options such as “cheap insulin analogues,” “pending approval of glucose-responsive insulins, [editor’s note – there are none of these that we know of that are close to approval]” or “generic GLP-1s and SGLT-2s.” The crowd’s choice led Dr. Hirsch to reinforce his point further that the potential benefits of insulin treatment should not be overlooked, especially for those whose insurance does not cover either GLP-1 or SGLT-2 inhibitors. As his own modification to the ADA/EASD treatment algorithm, Dr. Hirsch added that following metformin treatment and lifestyle education, he would at least consider basal insulin for any patient with an A1c >9%. Importantly, Dr. Hirsch emphasized keeping any insulin regimens he provides simple for his patients – creating a protocol for “small, medium, or large” meals.