Senseonics reported encouraging 4Q17 financial results yesterday in a call led by CEO Dr. Tim Goodnow. The call was buzzing with talk of the much-anticipated FDA Advisory Committee meeting to review the PMA for Eversense (March 29), as well as Senseonics’ plans to reach commercial readiness for a US launch by mid-2018. The product has ~2,000 users in Europe, nice adoption in these early days. We were also very pleased to hear that the 180-day Eversense XL is slated for a US clinical trial to begin enrollment this summer. Read on for our top highlights from the call.

Quarterly revenue of $2.9 million increased 38% sequentially from $2.1 million in 3Q17. Full-year sales were $6.4 million, up impressively from $332,000 in 2016; this year was Eversense’s first full-year on the market. 4Q17 sales fell right in the middle of the $2.5-$3.5 million guided for on the 3Q call, indicating management has good visibility in these early days of the launch. Cash and cash equivalents of $36.5 million at the end of 2017 declined 31% sequentially after a $26 million raise brought cash to $52.7 million in 3Q17. The company raised $52 million from convertible notes in January, which significantly extends the runway and should support US launch. During the call, management cited higher operating expenses to support and expand European distribution and prepare for the US launch as the largest driver of a reported net loss of $16.3 million. 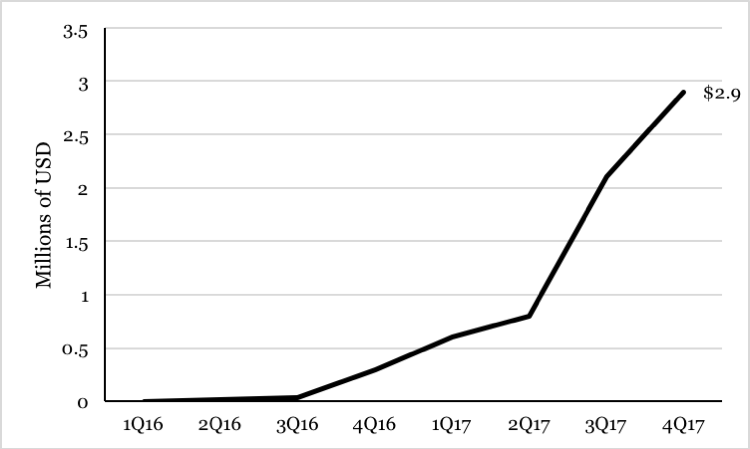 In his prepared remarks, Dr. Goodnow highlighted that there are now 2,000 unique users on Eversense, marking an impressive 135% sequential increase in 4Q17 relative to 3Q17. It’s been some time since Senseonics last gave a formal user base update (there were “over 340” in September), but we heard a ballpark from a rep in February that there were >2,000 total users, with ~1,500 in Germany alone. Eversense now has access to 60% of covered lives in Germany (similar to Dexcom), and as of ATTD, is available in 14 countries, 13 of which are in the EU (+South Africa). Obviously, it’s a major positive that Roche is the primary distributor, given its strong presence in Europe. Dr. Goodnow was particularly proud of sensor re-insertion rates, citing 77% of individuals re-inserting following the first sensor, 90% re-inserting following the second and third sensors, and an impressive 100% re-insertion following the fourth, fifth, and sixth sensors. These long-term re-insertion rates indicate strong user satisfaction and retention, a promising sign in early adopters. Dr. Goodnow referenced reimbursement issues as partially to blame for the drop-off following the first sensor; still, we think 77% is quite good, especially given the company’s size at this time. Promisingly, Dr. Goodnow also mentioned a survey in Italy (n=130) showing 93% of patients were satisfied or highly satisfied with Eversense, which seems like very good feedback even allowing for survey bias. Survey data continues to find that nine out of 10 users want to be inserted again, potentially hinting that 13% of the first sensor drop-offs are due to reimbursement troubles.

1. Commercial Readiness in US in Mid-2018; Likely ~$10 per day in US; “Robust and Good” Conversations with US Payers

Management reiterated expectations for a mid-2018 limited US market entry, followed by “modest but ramping” revenue contributions from the US in 2H18. Dr. Goodnow said that Roche has set Eversense pricing in the EU at ~€10/day (~$12.40/day), and suggested that US pricing will remain “very close to where the market [for full featured CGMs] is,” which he estimates to be ~$10 per day. This price point, which we view as favorable, aligns well with previous remarks. $10 presumably constitutes net price – what the company realizes after rebates and discounts to payers – as Dexcom indeed pulls in ~$10 per sensor per day in the US on seven-day wear. (At 10-14 day G5 wear, Dexcom’s price comes down to ~$5-$7 per day.) This Dexcom estimate does not include the cost of transmitters or receivers, but we’re not sure if the same could be said for Dr. Goodnow’s figure. For context, net price per day for Abbott’s FreeStyle Libre sensors in the US is <$3.60, meaning it’s still more than 50% cheaper than Senseonics. According to VP of the US Region Mr. Mike Gill, conversations with major US payers have been “fairly robust and good” as they particularly recognize Eversense’s potential to boost adherence. That said, coverage policy updates are beholden to a somewhat strict timeline and may not be established by the time FDA makes a decision. However, Mr. Gill expects that the “vast majority of covered lives” will have payer coverage over the next couple of years. Payer interest at this stage, before Senseonics has produced any real efficacy data, is a positive sign, though we’d emphasize that obtaining CGM and supplies still remains a hassle even for those with private insurance. Of note, a Roche-sponsored French efficacy study PI’d by Prof. Eric Renard (n=324) is listed on CT.gov, but not yet recruiting.

Management was optimistic regarding the upcoming March 29 FDA Advisory Committee meeting to review the PMA for Senseonics’ 90-day Eversense CGM. Dr. Goodnow said the company plans to (i) emphasize the sensor’s strong performance in clinical studies and real-world data from the 14 countries where it has launched; (ii) overview factors that differentiate Eversense from other options (e.g., duration of wear, fewer adhesive issues, direct-to-phone transmission with no dedicated receiver); and (iii) detail training programs for the insertion and removal procedures. As we previously wrote, we don’t anticipate this will be a rocky Ad Comm, but anything can happen at these meetings – especially depending on how experienced the panelists are with diabetes. In the US pivotal (PRECISE II), Eversense performed very well with a two-calibration per day MARD of 8.8% vs. YSI, with just 14 adverse events in seven subjects. With one calibration per day, MARD was still a very solid 9.5%. Senseonics seeks approval for adjunctive and two-cal/day claims at this time. Real-world data presented at ATTD corroborated strong PRECISE II results showing 94% of sensors successfully reported continuous glucose data over the 90-day period. FDA’s approval of Medtronic’s Guardian Connect standalone CGM earlier this week also indicates that the Agency is open to a smartphone-only CGM (no dedicated receiver).

Pipeline and Other Highlights

1. 180-Day Eversense XL Clinical Trial in US to Begin Enrolling this Summer

During his prepared remarks, Dr. Goodnow briefly mentioned that a US clinical trial for the 180-day Eversense XL sensor with “reduced calibration” is expected to begin enrolling patients this summer.  Dr. Goodnow was most likely referring to one calibration per day (9.5% MARD in the 90-day US pivotal), as Senseonics hasn’t commented on factory-calibration since May. At that time, the second-gen, zero-calibration version with redundant glucose sensing mechanisms was still in human feasibility studies. Dr. Goodnow noted that Senseonics is working with the FDA on the clinical trial, and indeed, it is not listed on ClinicalTrials.gov. A 180-day indication would significantly improve Eversense’s value proposition in the competitive US CGM market – we’ll be interested to see how long that study takes and when the indication could become available. Assuming a year to run the study and some time to submit to FDA, we’d guess availability in late 2019 or early 2020 is possible – at that point, Dexcom should be well into the Verily gen-one launch, and Abbott may be out with its next-gen FreeStyle Libre.

2. Eversense XL Controlled Launched in UK and Sweden, in Other Countries in Coming Months; Existing Eversense User Base Transferred to XL by 3Q18

The 180-day-wear Eversense XL launched in the UK in November and in Sweden this month. In a statement demonstrating the sheer length of XL, Dr. Goodnow boasted that the sensors inserted in November will be removed in April – pretty impressive. Management noted plans to expand to other countries, expressing interest in Italy as a “very attractive market,” and referencing the UK as “probably the third largest opportunity” behind the US and Germany. At ATTD, we learned that Eversense XL likely won’t enter the German market until at least April. VP of Global Commercial Operations Ms. Mirasol Panlilio expects that the entire installed base will have moved to the Eversense XL sensor by 3Q18. Since we believe the only differentiator between the 90- and 180-day sensor is the duration, intensive training presumably won’t be necessary. We assume the sensor is the same and the main change is in the software. Dr. Goodnow highlighted that Roche has done an “exemplary job” of introducing the Eversense XL in the UK, and feedback has been “very positive.” We found it especially indicative at a recent meeting when we learned that the XL gives a reminder to schedule the removal procedure at four to five months, the idea being that the date is so far in the future that patients forget about it.

In his prepared remarks, Dr. Goodnow noted that the EU pivotal trial of the Roche-Senseonics-TypeZero 180-day hybrid closed loop system is expected to begin in 2H18. This timing is slightly delayed from DTM (1Q18), which is not a surprise – the Tandem/Dexcom G6 phase of the trial has also been long delayed (now slated to start in 2Q18). We imagine that this CE mark-supporting study, not yet up on CT.gov, could potentially wrap up later this year.

At ATTD, the Roche booth and symposium heavily featured Senseonics and representatives noted eventual plans for Senseonics CGM data to stream to a smartphone app intended to merge all components of Roche’s digital ecosystem. We continue to wonder whether Senseonics may be a Roche acquisition target in the future – the company has shown a willingness to integrate external components (e.g., mySugr acquisition for ~$80 million), has deprioritized its own Accu-Chek Insight sensor in favor of Eversense, and is now supporting an efficacy study of Eversense in France. Of course, there is also Roche’s financial investment … Senseonics’ market cap is now just over $430 million, rising from 3Q17 (+5%). With FDA approval potentially looming, value may go up – might Roche act soon? Or is Roche better served as the distribution partner, leaving Senseonics on its own?