The ADA just published its latest economic analysis measuring the cost of diabetes in the US in 2017. You can read the full paper in Diabetes Care, and check out this accompanying US News article authored by ADA Chief Scientific, Medical, and Mission Officer Dr. William Cefalu.

The ADA estimates that direct and indirect costs of diagnosed diabetes totaled $327 billion in 2017, growing 26% from $245 billion in 2012 after adjusting for inflation. This jump was driven more so by increased prevalence rather than higher cost of care, because at the population scale people with diabetes do seem to be living longer with the disease. Both direct medical expenditures ($237 billion) and indirect productivity loss ($90 billion) rose substantially from 2012, the last time ADA conducted this rigorous and comprehensive economic analysis. After adjusting for inflation, direct costs grew 26% from a base of $176 billion in 2012 to $237 billion, while indirect costs grew 23% from $69 billion to $90 billion. We discuss each of these cost categories in more detail below.

Notably, this five-year growth in diabetes-related spending is greater than it was between 2007-2012 (21% after adjusting for inflation), which means the US has made next-to-no progress over the past half-decade in lessening the financial burden of this chronic disease and in reducing growth. The ADA has published a similar analysis at five-year intervals since 1997, as summarized in the table below.

*As provided by the ADA

This is extremely disturbing news if we’ve ever seen it – that medical and non-medical costs of diabetes in the US have continued to climb over the past 20 years. Disturbing, but not surprising. IDF presented a global analysis of diabetes prevalence and economic burden in its 2017 Atlas, and found that the US was responsible for nearly half of worldwide diabetes-related spending (48%, or $348 billion out of $727 billion total, only considering direct medical costs). IDF reported that one in eight global healthcare dollars goes toward diabetes, and ADA states that one in four US healthcare dollars goes toward care for someone with diabetes (more than half of these dollars are spent on diabetes care, specifically); this has increased from one in five healthcare dollars spent on diabetes patients in 2012. Another recent study in Diabetes Care projected $2.5 trillion in annual global costs of diabetes (direct + indirect) by 2030 if current prevalence and mortality trends persist. The ADA’s health economic assessment of diabetes in 2017 supports these other findings – clearly, this epidemic has become unsustainable on its current trajectory, and we urgently need to start bending the curve.

As Dr. Cefalu writes in US News, delivering a necessary call to action: “We must heed the warnings of the scientific evidence before us – diabetes is our nation’s most expensive health condition. We must take action to reduce both the incidence and prevalence of diabetes, thereby reducing its costs.”

The 26% inflation-adjusted growth between 2012 and 2017 was attributed to increasing diabetes prevalence as well as higher medical cost per person with diabetes. According to ADA estimates, the number of patients with diagnosed diabetes has grown steadily from 7.5 million in 1997, to 12.1 million in 2002, 17.5 million in 2007, 22.3 million in 2012, and now 24.7 million in 2017. That said, the rate of growth has been slowing: From 1997 to 2002, prevalence rose 61%, then 45% to 2007, 27% to 2012, and now 26% to 2017. Even so, decelerated growth in US diabetes prevalence is hardly cause for celebration when the rate of increase is still in the double-digits. Global rates of diabetes continue to climb skyward when what we actually need to see is declining prevalence – this is no time to get complacent. Moreover, we have to hope that rates of diabetes diagnosis aren’t simply falling.

Excess medical costs per patient with diabetes grew 14% from $8,417 in 2012 to $9,601 in 2017, which can be attributed in large part to additional drugs and supplies not required in those without diabetes. On average, the person with diabetes incurred 2.3x the medical expenses of someone without diabetes in 2017. Interestingly, however, the excess medical costs were most often related to non-diabetes drugs. As Dr. John Buse explained, people with diabetes take blood pressure meds, lipid-lowering drugs, therapies for depression and mood, and medicines for CV disease and atherosclerosis at higher rates than the background population – he estimated 2-5x as many prescriptions. People with diabetes are more likely to need an expensive prescription for a cancer drug or for a PCSK9 inhibitor, he added, so “it adds up.” In fact, Dr. Buse mentioned that he’s “surprised others are surprised by the non-glycemic medication costs for patients with diabetes.” Much more on this below.

Men with diabetes incurred higher per-capita expenses than women, at ~$10,060 vs. $9,110, respectively, following the same trend from 2012 ($8,331 for men, $7,458 for women). Race also had an impact: Cost per Black person with diabetes was $10,470, followed by $9,800 per white person with diabetes and $8,050 per Hispanic person with diabetes. Indirect costs on a per-patient basis have remained more or less flat over the past decade (though they’ve still climbed on a population level due to rising prevalence), as illustrated here: 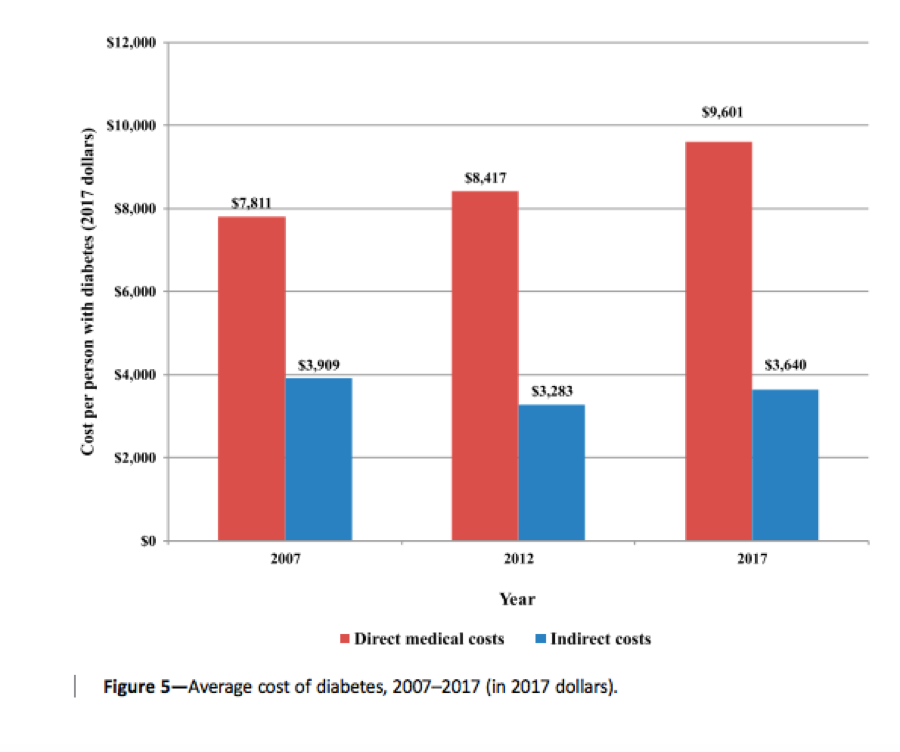 Conspicuously, prediabetes was not addressed in this latest study. The ADA’s 2012 paper noted a separate analysis estimating costs of prediabetes of at least $25 billion annually, calculated by evaluating healthcare utilization patterns among people with prediabetes. That study found increased utilization of ambulatory care but not inpatient hospital stays or emergency visits, and it used the 2007 prevalence of 57 million people with prediabetes to calculate total cost. In 2017, however, ~84 million Americans were estimated to have prediabetes, so costs can only have increased. At the same rate of utilization, the annual cost of prediabetes in 2017 would be ~$37 billion, by our calculations.

We were somewhat disappointed that this report was released to far less fanfare than in 2012, when the ADA and the co-chairs of the Senate Diabetes Caucus, Senators Susan Collins (R-ME) and Jeanne Shaheen (D-NH), held a press conference to announce the results of the ADA’s analysis. 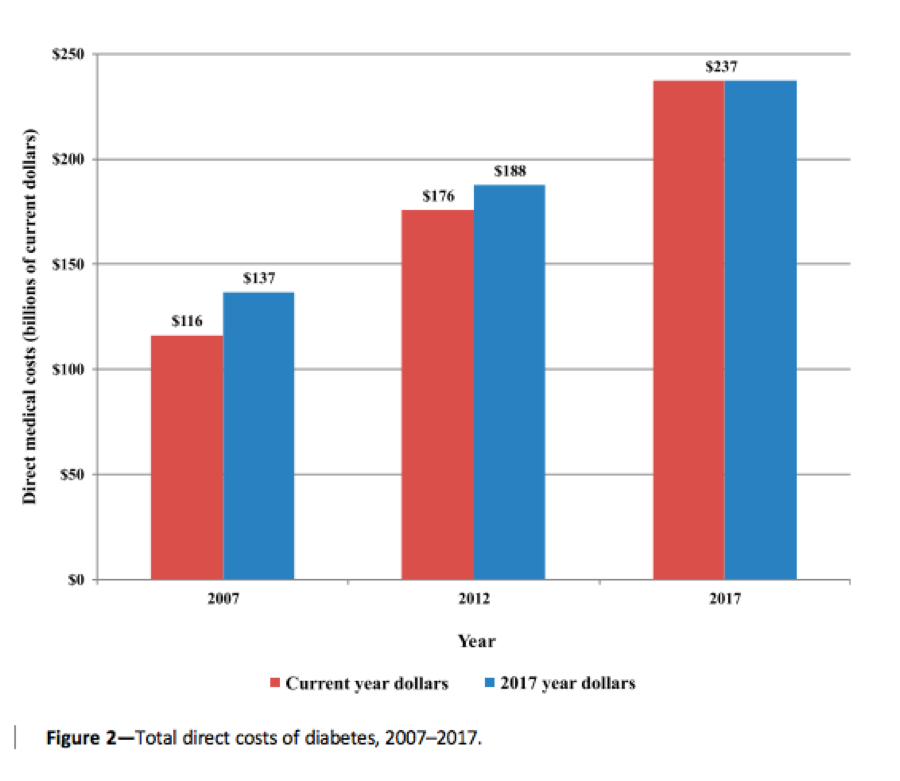 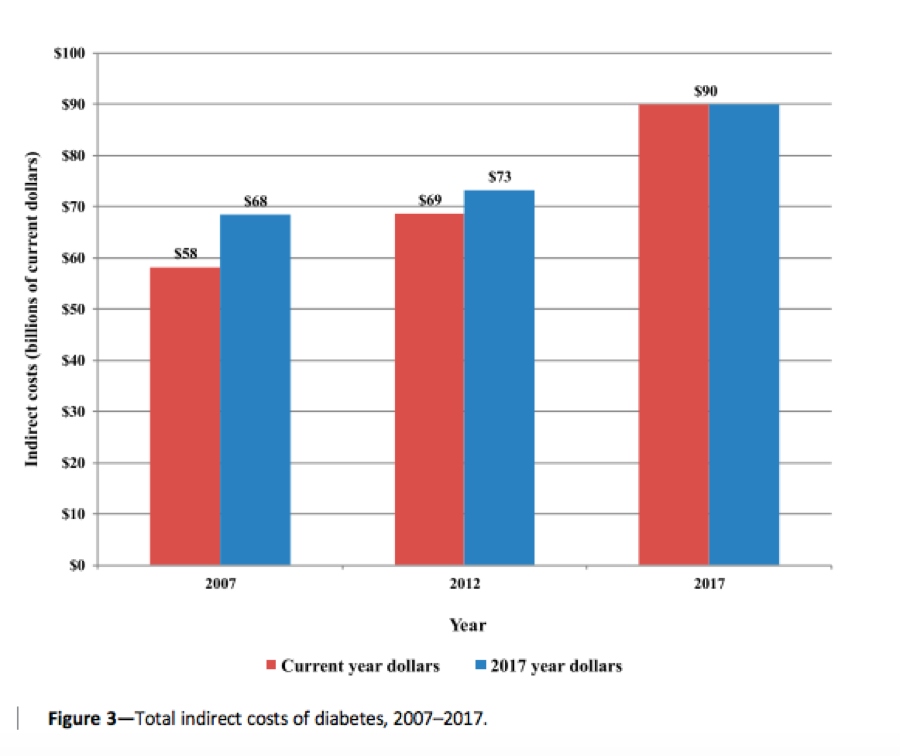 Q: For the cost of prescriptions for complications, is it possible to break down dialysis costs, CV disease costs, etc.? What are the biggest potential cost-saving areas?

Q: If people are now living longer with diabetes (i.e., the average “duration” of diabetes increasing), how much is this trend impacting the cost of diabetes?

Q: How much money did the US spend on prediabetes in 2017?

Q: On whom are the costs of diabetes being leveraged most severely? Is anyone (payers, PBMs, hospitals) benefitting financially?