Yesterday, Novo Nordisk announced positive topline data from the PIONEER 1 trial of oral semaglutide, highlighting the candidate’s A1c-lowering efficacy, weight loss potential, and safety/tolerability. This is the first phase 3 readout on an oral GLP-1 agonist, and it marks the first of 10 PIONEER studies from Novo Nordisk that will wrap up and report results in 2018. If all goes according to plan, the company will file an NDA for oral semaglutide in 2019, with possible market launch in 2020.

In PIONEER 1 (n=703), oral semaglutide met its primary endpoint of significant A1c reductions over 26 weeks vs. placebo. Adults with type 2 diabetes were randomized to one of four treatment arms: (i) 3 mg oral semaglutide once-daily, (ii) 7 mg once-daily, (iii) 14 mg once-daily, or (iv) placebo. All three doses of the active agent showed superior A1c-lowering vs. placebo at week 26. Baseline A1c was 8% across treatment groups; margin of A1c decline with each dose was not disclosed, and we eagerly await the full PIONEER 1 results for this information. Furthermore, there’s no mention of p-values for the primary endpoint, but the announcement states that all oral semaglutide doses reached statistical significance.

We’re certainly excited by the prospect of an oral GLP-1 agonist, and oral administration seems like the next major frontier of innovation for GLP-1 therapy. This class is growing fast from a high base, and importantly, still has ample head room for further growth – only 7% of second-line diabetes prescriptions in the US go to a GLP-1 agonist (46% still go to a sulfonylurea, which is so disappointing), and GLP-1 prescription volume represents a mere ~30% of basal insulin prescription volume globally. 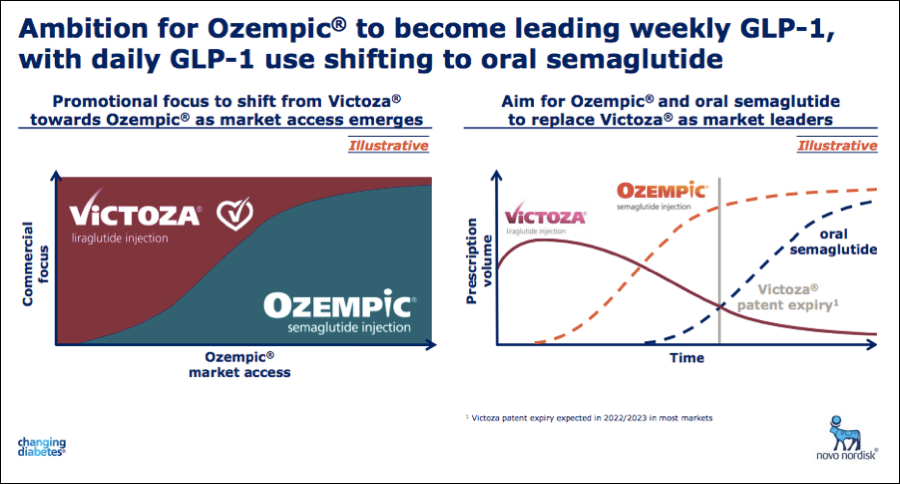 Q: When can we expect full results from PIONEER 1? We wouldn’t be surprised to see this at ADA 2018 in Orlando.

Q: What were the p-values on primary endpoint?

Q: What were the adherence rates in each arm of the study (3 mg, 7 mg, 14 mg, or placebo)? How was adherence defined in PIONEER 1? How exactly was “adhering to treatment” and “not requiring rescue therapy” defined?

Q: Were there dose-dependent effects observed in PIONEER 1? How did margin of A1c-lowering compare with low-, middle-, and high-dose oral semaglutide? How did adherence and nausea (among other side-effects) differ across groups? This could be important in determining optimal doses for real-world patients, balancing efficacy with tolerability.

Q: How will oral semaglutide be priced, assuming it is eventually approved and launched commercially? It may be early to speculate – as of now, an NDA is planned for 2019, which means the product wouldn’t be available in pharmacies until 2020 at the earliest – but it’s hard to ignore cost/reimbursement questions given the challenging pricing environment around diabetes drugs (and the bar for new therapies is only rising).