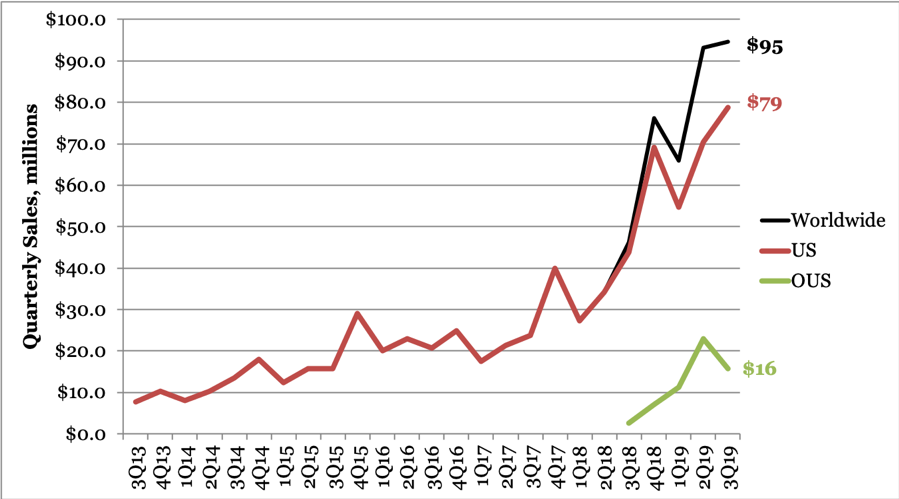 Tandem reported record worldwide sales of $95 million in 3Q19, rising an impressive 105% YOY on a tough comparison to 71% growth in 3Q18. Sequentially, sales rose 2%, just surpassing the $93 million record set in 2Q19. Tandem has now seen eight straight quarters of >50% YOY sales growth, five consecutive quarters of >70% growth, and three straight quarters of sales more than doubling – truly remarkable momentum, and the best may be yet to come with Control-IQ! As usual, pump shipments made up the majority of sales (67%), followed by infusion sets (22%) and cartridges (11%). 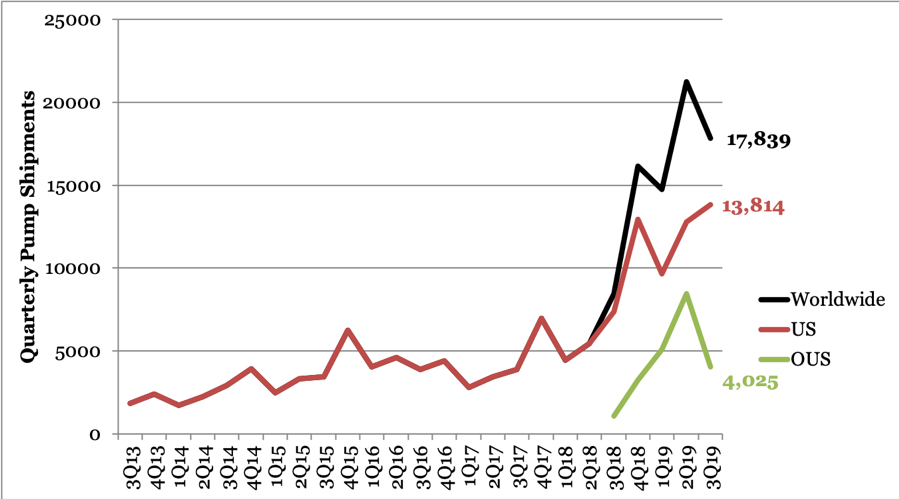 Tandem’s profitability metrics are moving in the right direction:

Management increased full-year 2019 guidance to between $358-$365 million, raising low-end expectations by $8 million, while keeping the high-end of guidance the same as that of 2Q19. The updated guidance now reflects annual sales growth of 95%-99%. It’s been quite a year for sales guidance raises: in 2Q19, management increased expectations by a whopping $50 million; in 1Q19, it was raised by $45 million! The low-end guidance raise stems from optimism around continued growth in the US market, excitement for the launch of Control-IQ (4Q19; see below), and continued international roll-out of Basal-IQ. Adjusted EBITDA for the year is expected to end positive, between 7%-12%.

CEO John Sheridan stated he was “very confident” that the Control-IQ hybrid closed loop would be approved by the FDA “this quarter” (i.e., before the end of 2019) – no change in timing. Mr. Sheridan added that there have been “no concerning issues” with the FDA regarding Control-IQ, and the ongoing review process was characterized as “routine” and “interactive.” Mostly, he used the word “pending” to characterize the approval, implying it may be very close to the finish line. The control algorithm was submitted for FDA review in ~July following strong “landmark” pivotal trial results at ADA 2019 and the prestigious publication in NEJM two weeks ago. Impressively, the 4Q19 launch timing is unchanged since 1Q19. As a reminder, only the Control-IQ algorithm itself is being reviewed, as the t:slim X2 ACE pump and Dexcom G6 iCGM are already FDA cleared. Following Control-IQ approval for 14+ years of age, Tandem will “take a few weeks” to educate providers on features and functionality, before shipping out pumps to new users and rolling out the free home software update for current t:slim X2 users. That cadence implies that even if approval comes this week, the launch may not technically happen until December. (Indeed, Tandem has not factored the launch of Control-IQ into its revenue guidance.) In anticipation of the launch, Tandem has already begun training its sales teams on Control-IQ – we expect strong uptake for this highly usable advanced hybrid closed loop system (no fingersticks, no juggling modes, automatic boluses). It should drive quite a 2020 for Tandem in the US and for expanding the automated insulin delivery (AID) field.

Control-IQ and t:connect Mobile App From the AADE Exhibit Hall 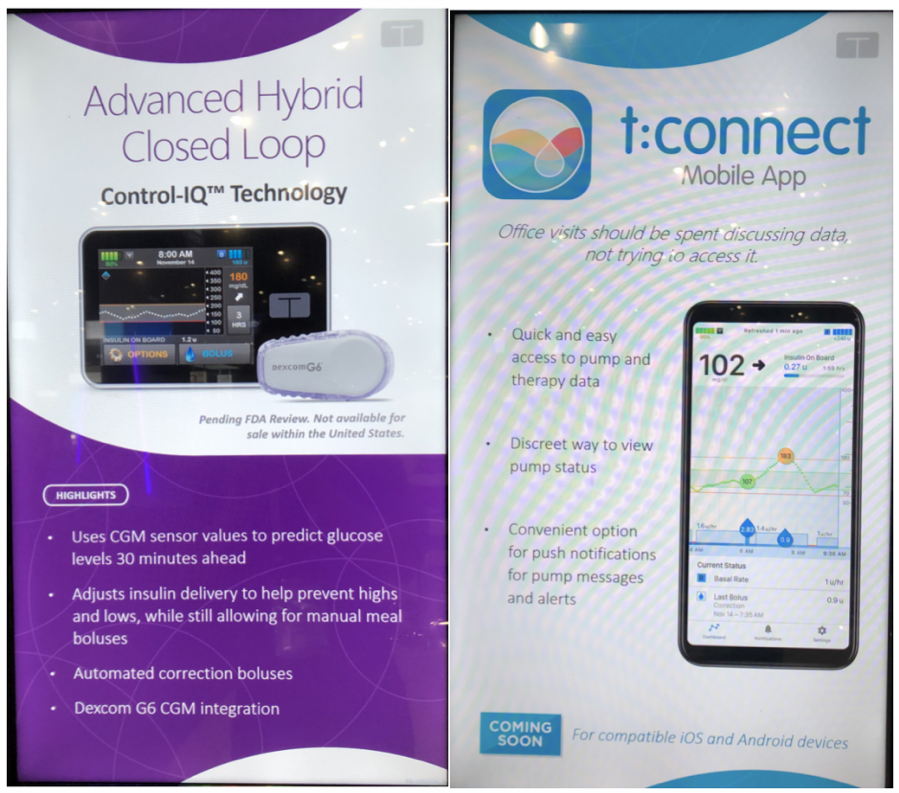 As shared in the AADE 2019 Exhibit Hall, today’s call confirmed the t:connect smartphone app will launch concurrently with Control-IQ – allowing patients to upload their t:slim X2 pump data and Dexcom G6 CGM data to the t:connect web platform wirelessly. The anticipated 4Q19 launch timing comes delayed from 1Q19 expectations for a launch in “summer” 2019. Still, the new app will remove the burden of cabled data transfer for both patients and providers – a huge win, a necessary driver for more continuous/remote management, and the potential first no-cable-upload for a pump in the US. (Insulet has not yet launched automatic uploads for Dash - from what we can tell, Dash must still be plugged in to a Mac/PC to upload to Glooko.) Mr. Sheridan shared that more features would be rolling out the app, “at a steady cadence” in 2H20. 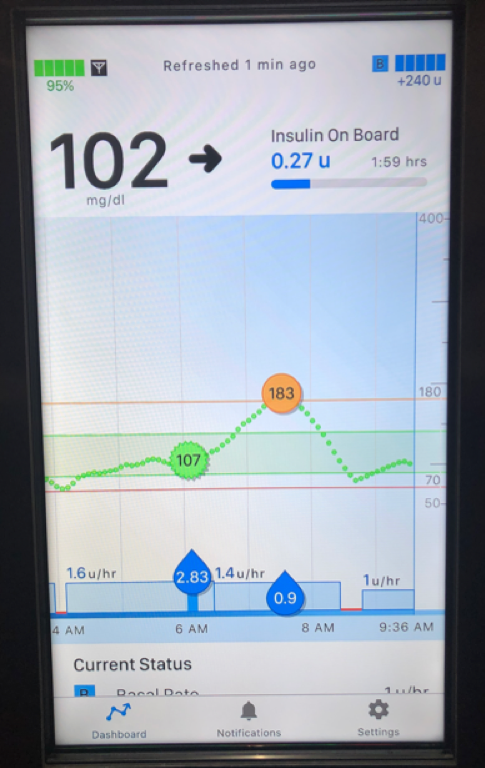 In the first significant update on Tandem’s t:sport pump since 1Q19, we learned that the hardware design is now “final,” with focus moving to software. The ~50% smaller, no-screen pump will be submitted to FDA in “summer” 2020, in line with earlier expectations; with this timing, a launch of t:sport seems possible before the end of 2020. Tandem confirmed that the device will be submitted as an ACE pump, the interoperable category created by Tandem in February with t:slim X2. As a reminder, t:sport is a screenless, wirelessly controlled tubed pump (short infusion set), which will include the Control-IQ algorithm and iCGM integration (no new clinical data will be needed). t:sport is half the size of the current t:slim; will switch to a syringe-driven pumping mechanism (a big manufacturing change for Tandem); and will add wireless charging, water resistance, an on-device bolus button, and an easier fill process. Closed loop will still run on the pump if the phone is out of range, keeping Tandem more competitive with the on-body system design of Insulet’s Omnipod Horizon. 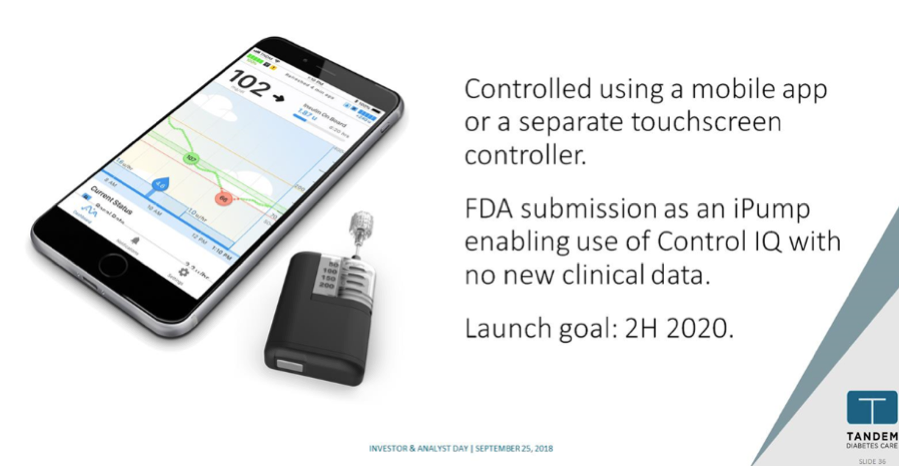 4. Basal-IQ Available in “Half” of Tandem’s OUS Countries; t:slim X2 to Expand into Germany, France, and Three More Countries in early 2020

Tandem’s predictive low glucose suspend algorithm, Basal-IQ, is now available in “half” of its OUS countries, following US launch just over a year ago. The Tandem Device Updater became available on September 30, which will enable current t:slim X2 users to upgrade their devices and add G6 integration and PLGS functionality. The cadence of countries for Basal-IQ launch will continue to depend on Tandem’s distribution partners, regulatory progress, reimbursement, and where Dexcom’s G6 is available. Basal-IQ has done very well in the US and it certainly makes Tandem more competitive against Medtronic OUS, where the 640G has been available for some time and 670G continues to launch in new countries.

Following last month’s announcement, prepared remarks only briefly referenced the plan to integrate a “next generation” Abbott FreeStyle Libre CGM with Tandem’s insulin pumps. CEO John Sheridan was fairly cryptic, noting “There are a number of steps in finalizing this agreement.” Abbott also made reference to the partnership on its 3Q19 earnings call, a positive sign of both companies’ commitment to working together and interoperability, more broadly. When asked about integrating FreeStyle Libre 2 during Q&A, Mr. Sheridan made it very clear that Tandem has not even committed to which Abbott device the company plans on integrating (i.e., FreeStyle Libre 2 or something else down the pipeline). Additionally, he noted that the partnership probably would not have a “meaningful impact on revenue or growth” until 2021. See our report for a list of what potential integrations could look like.