Yesterday, Arena provided its 2Q16 update in a call led by brand new (as of May 2016) President and CEO Mr. Amit Munshi. Arena reported $4.3 million in net product sales of obesity drug Belviq (lorcaserin). As a reminder, Arena receives a portion of Eisai’s full Belviq revenues, which were recorded at $9.1 million (974 million JPY) – this represents a 24% year-over-year (YOY) decline as reported (34% in constant currencies) and 16% sequential growth. Arena’s portion of the Belviq revenues was flat YOY and rose 23% sequentially, as reported. This comes against an easy comparison: in 1Q16, Arena reported its lowest quarterly revenue ($3.5 million) since 4Q14 and the largest YOY decline (47%) since Belviq’s launch. While we are glad to see this uptick, the recent performance trends of Belviq and other obesity drugs are not reassuring. Belviq’s weak performance in recent quarters appear to have shifted Arena’s attention away from obesity, which was clearly reinforced by the company’s recent statement announcing a strategic shift to streamline its operating costs and allocate greater resources toward developing its pipeline products.

On a more positive note, management highlighted two recent regulatory approvals that occurred this past July (just after the end of 2Q16): First, Belviq was approved for chronic weight management in Mexico, to be launched in coming quarters under the brand name Venespri – an exciting development, given the high obesity rates in Mexico. Second, the FDA approved a New Drug Application (NDA) for Belviq XR, a once-daily formulation of Belviq, in the US – while this is a win on the patient adherence front, we are hesitant to predict any significant revenue growth from this new product, given the pre-existing challenges for obesity drug uptake (i.e. patient/provider education, high costs, reimbursement challenges, etc.). On the financial front, Arena will receive $11 million in milestone payments from Eisai in connection with these two regulatory approvals. 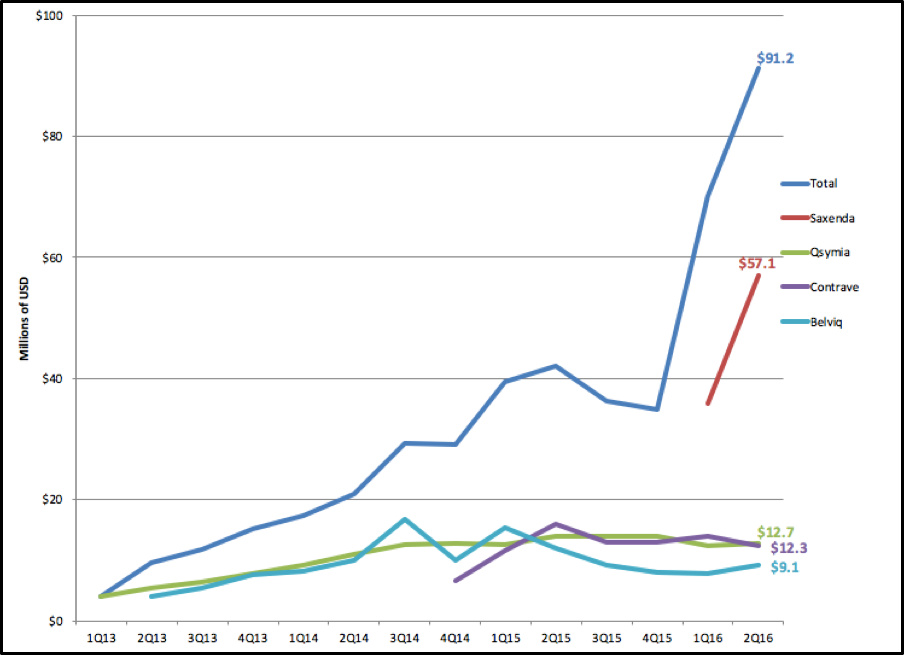 -- by Abigail Dove, Melissa An, Sarah Odeh, and Kelly Close