1. Next Steps for Empagliflozin in Type 1: Cardio and Renal Outcomes Studies?

Given the nature of today’s discussion and ultimate tally, while it seems clear that FDA will not approve BI’s application in its current state, there did seem to be optimism that a low dose SGLT inhibitor could one day be approved given more expansive data to better understand its entire risk/benefit profile. That said, there was also doubt whether DKA risk in clinical trials could be assessed in a controlled setting. Moving forward, we sincerely hope to see outcomes trials done with SGLT inhibitors in type 1 diabetes to determine whether the powerful reductions in renal and cardiovascular events seen in type 2 diabetes translate to the type 1 population – Dr. John Buse said through an open comment speaker that he felt very strongly that those with type 1 and chronic kidney disease would have a very strong likelihood of seeing reduction of risk. We strongly believe that this is one of the most important considerations for type 1 patients who may consider starting an SGLT inhibitor. During today’s discussion, we heard a few panelists reference this call for such outcomes trials, especially in terms of including renal outcomes as secondary endpoints in any future trials of these agents. While many have been interested in a type 1 outcomes trial for quite some time, the elephant in the room remains where the funding for such a major investment would come from. CVOTs and renal outcomes studies are expensive to carry out, and many sponsors may look at the smaller type 1 diabetes market and deem the risk/reward ratio to not be favorable enough to actually carry out such a trial. Encouragingly, hearing KOLs hypothesize that it’s likely that CV and renal benefits extend to type 1 should help moving forward. We wonder whether the multiple SGLT sponsors—Lilly/BI, J&J, Merck, and AZ—might collaborate to carry out such an outcomes study for the entire class, perhaps with government and other funders. The savings to the area would surely be in the billions of dollars and the impact might well be seen earlier than anticipated though that is hard to speculate on – the trial may not be particularly easy to enroll, either. We hope that next steps for empagliflozin in type 1 include some sort of movement toward outcomes trials in the type 1 population looking at potential cardio and renal protective effects, although we do realize the barriers for such a trial are high.

The majority of panelist critique of BI’s application surrounded what they deemed to be an inadequate study size and length for the sole phase 3 trial, EASE-3. We are a bit surprised this was not discussed earlier with FDA by the sponsor though it was said in the discussions that the sponsor originally planned for a higher dose to be submitted. The disconnect appeared to be around submitting a lower dose and only one trial. Notably, the study included just 241 patients on the 2.5 mg dose of empagliflozin and was carried out for just 26 weeks – we would have assumed this would’ve been discussed earlier whether this was “enough” but the panelists made clear they would like to see significantly more data. The panelists were also slightly blithe in our view of how easy this would be or whether the support would be there for this. Multiple Ad Comm members questioned the durability of the 0.28% drop in A1c seen at 26 weeks and surmised whether or not an upward drift would be seen if the study were carried out for a longer duration, particularly since part of the benefit was already placebo seeing a higher A1c. Although a set length was not decided upon, most panelists seemed to suggest a second study spanning 52 weeks to get a better sense of long-term changes and a more definitive evaluation of DKA risk (more on this below).

Much of the FDA’s clinical safety assessment was focused on concerns regarding the reliability of BI’s DKA adjudication system, consisting of the classifications:

While the sponsor did not find an imbalance in “certain DKA” events with empagliflozin 2.5 mg vs placebo (2 events vs. 3 events), FDA did not agree with some classifications funneled into the “unlikely ketoacidosis but ketosis” category instead of “certain DKA.” Despite not checking off BI’s list of qualifiers to make up “certain DKA,” FDA found these events to be “clinically significant serious events” that required hospitalization and prompt intervention, such as discontinuation of the drug. FDA presented three specific examples of patients adjudicated as “unlikely ketoacidosis but ketosis,” including (i) a 20-year-old woman, who was hospitalized for three days and permanently discontinued taking empagliflozin; (ii) a 51-year-old woman, who visited the ER twice after continued symptoms of nausea and vomiting; and (iii) a 32-year-old woman, who required insulin infusion and IVF following vomiting and dehydration. Instead of only focusing on “certain DKA” events, FDA asserted that total adjudicated DKA events would be a more relevant measure. This point was broadly agreed upon by the voting members of the panel as well, with several panelists noting that it might be more instructive to think of DKA along a spectrum of risk, rather than a simple binary category. Overall, 13 such events (certain + potential + unlikely ketoacidosis but ketosis) were demonstrated in the population on 2.5 mg empagliflozin compared to 6 events on placebo. See the breakdown below. We are curious how events might be perceived that could be moving “toward” DKA but where patients themselves moved from vomiting etc. at home toward full health – it seems like once a patient is vomiting and in the hospital, that is hard to imagine the patient is not in DKA. We would have assumed that questions like this would have been more standardized based on BHB levels etc. than perhaps they actually are – it was clear that the panelists did not all have full knowledge of ketosis vs. ketoacidosis. 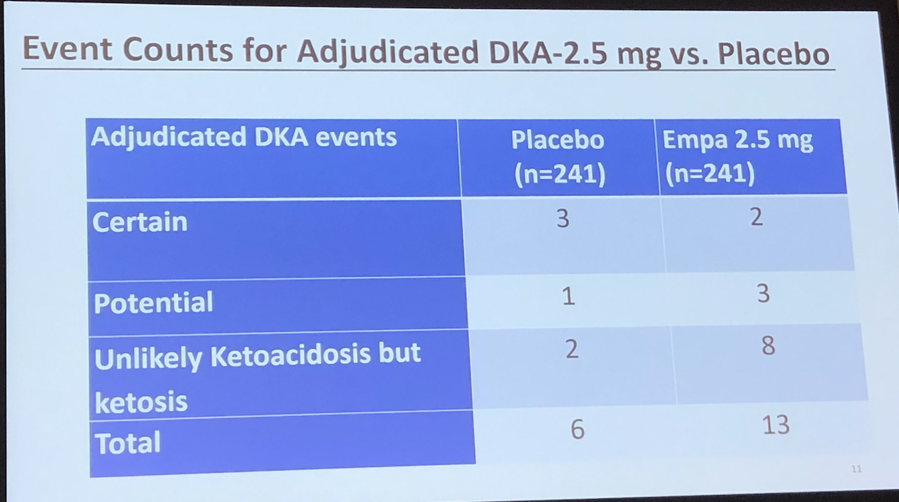 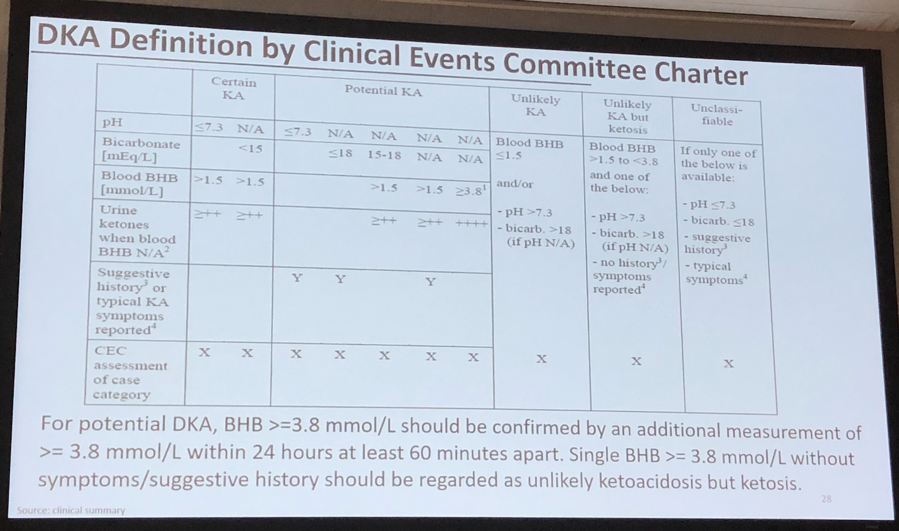 Throughout today’s meeting, we felt a shared desire and sense of urgency to fill the current unmet need in type 1 diabetes adjunct therapies from all parties present. We applaud the FDA, Lilly/BI, and the panelists for committing to high-level treatments for an area in much need of innovation. Overall, the Ad Comm members seemed very optimistic about empagliflozin’s future (if not in full understanding of what drives forward the compound commercially), and many panelists did highlight the 2.5 mg dose as the probable “sweet spot” to balance both efficacy and safety, though additional confirmatory data would be needed. Despite the FDA noting that the -0.28% decline in A1c is less than 0.3%, which is the non-inferiority margin that’s been used in many glycemic control trials for diabetes, the panelists seemed prepared to accept the modest change due to the limited number of treatment options currently available. Dr. Brendan Everett lauded the drug for being able to treat hyperglycemia without an increased risk of hypoglycemia, resulting in ~one hour increase in TIR. Dr. Everett added that for many of his friends who have children with type 1 diabetes, tracking the amount of time their children spend in therapeutic range “borderlines obsession,” and therefore, such a change would be quite significant. Dr. Kashif Munir similarly picked up on this point, noting that one hour of TIR translates to an added ~15 days per year spent in range  (he helpfully walked through the math of what an hour a day times 365 days is)– a finding that certainly feels relevant for patient quality of life and productivity. Other panelists also calling for further investment into measures beyond A1c, including TIR, microvascular and macrovascular complications, and renal complications specifically. Excitingly, the FDA’s Dr. Lisa Yanoff seemed to suggest that the FDA is becoming increasingly open to accepting TIR and other traditionally “secondary” outcomes as validated measures. We’ll be curious to see if this paradigm could even shift for any future clinical trials that Lilly/BI plan to run for the current type 1 indication application. 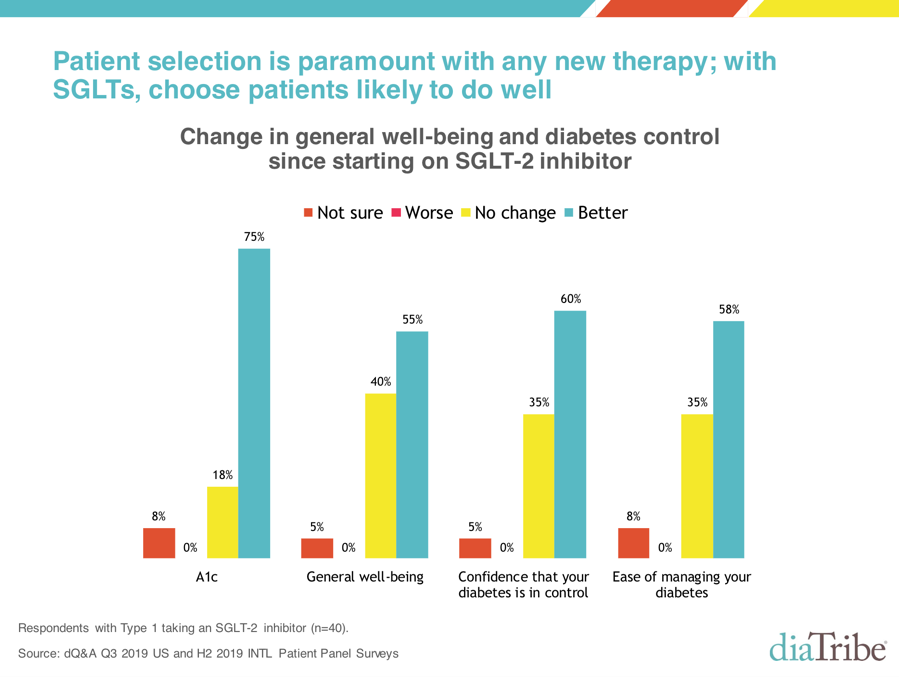 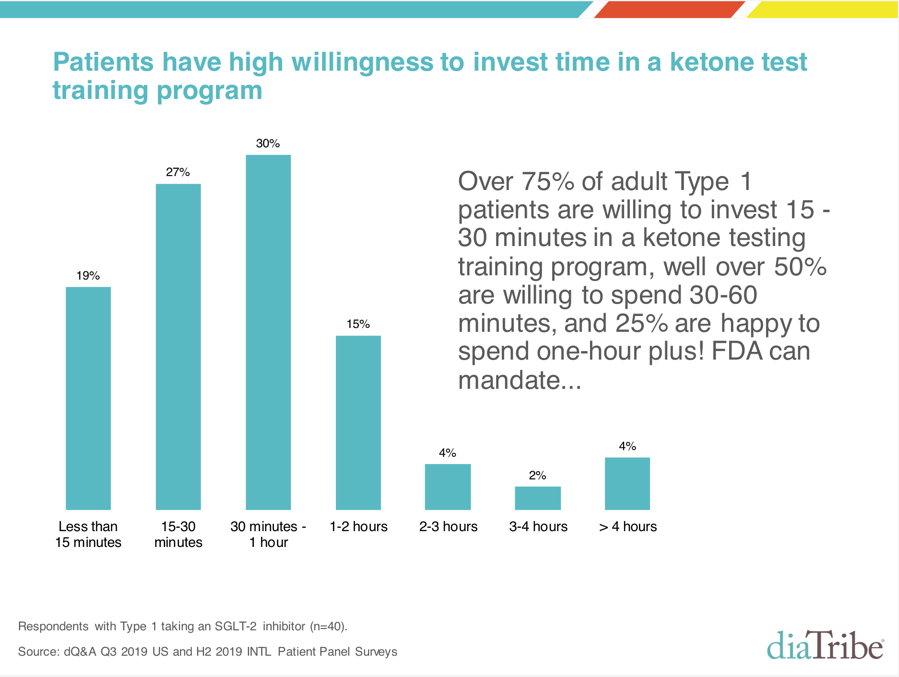