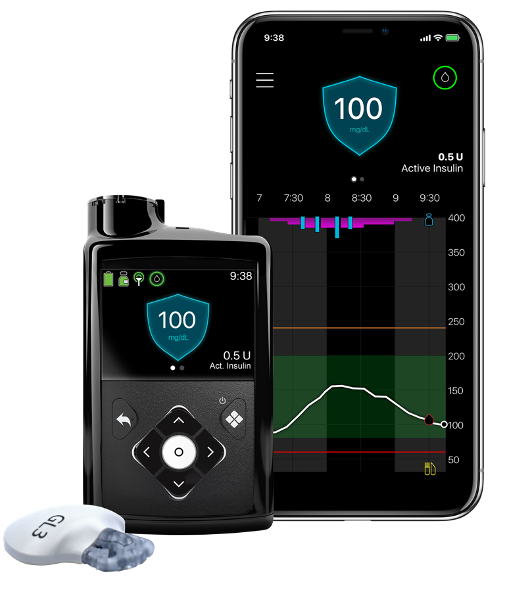 Medtronic plans to begin shipping MiniMed 780G in “select countries” in Europe starting “this fall.” MiniMed 780G is CE-Marked for patients ages 7-80 years old, meaning the system will launch with pediatric approval. Medtronic didn’t share any specific countries where 780G would be launched first, but presumably, this list would be similar or identical to the first countries where MiniMed 670G was launched: Belgium, Denmark, Finland, Ireland, Italy, the Netherlands, Spain, Switzerland, and the UK. Of note, Medtronic recently announced reimbursement for 670G in Germany (September 2019) and expected reimbursement in France by April 2020 (no confirmation on the company’s most recent earnings call).

Medtronic first confirmed its filing for CE-Marking for MiniMed 780G on its 4Q19 update in February. The expected launch in fall 2020 comes at a ~5-6-month delay from Medtronic’s original plans to launch by April 2020 (before the end of fiscal year 2020). Still, getting the system launched this fall in Europe will give Medtronic a nice head-start over its automated insulin delivery (AID) competitors. Tandem began rolling out Basal-IQ towards the end of 3Q19, but due to COVID-19, we believe international rollout of Control-IQ has been pushed back from original plans to launch in 2H20. Insulet’s Omnipod Horizon won’t be on the US market until 2021 and broader European rollout for Omnipod Dash has also been pushed back to 2021.

Medtronic’s second-generation automated insulin delivery (AID) system will be a significant upgrade over MiniMed 670G (launched in the US in June 2017, OUS in fall 2018). Like MiniMed 670G, MiniMed 780G will automatically adjust basal rates every five minutes, but 780G algorithm, developed in collaboration with DreaMed Diabetes, adds in automatic correction boluses. Additionally, MiniMed 780G has an adjustable target down to 100 mg/dl, compared to MiniMed 670G’s static target of 120 mg/dl. On the hardware side, MiniMed 780G’s pump adds Bluetooth connectivity, allowing for remote software updates and a mobile app for secondary data display and wireless data uploads. The second-gen system is designed to bring improvement on the usability front, reducing the number of alarms and simplifying operation. In the past, Medtronic has talked about ambitious >99% time in  closed loop goals for MiniMed 780G and we’ll be very excited to see time in closed loop numbers at ADA 2020’s MiniMed 780G presentations (see below). With the ability to deliver automatic correction boluses, 780G is also designed to be more “forgiving,” smoothing out highs when users forget or miscalculate when counting carbs or dose insulin before meals.

The user interface for MiniMed 780G (see picture above) is very similar to that of MiniMed 670G with the latest glucose reading displayed prominently on the pump. Active insulin and time are available in the corners of the display and the top-left of the display is occupied by indicators for battery level, reservoir volume, connection status, and CGM calibration status. The 780G display also includes two dots as page indicators; we’d guess the second screen shows a CGM trace. The companion app for secondary display looks sleek and attractive, with CGM and insulin delivery traces prominently displayed.

Getting MiniMed 780G approved puts Medtronic in a strong position to maintain and grow its share of the pump market in Europe. In the company’s most recent earnings call, Medtronic shared there were ~249,000 “trained, active users” for MiniMed 670G. Most of the recent growth in 670G users has been driven by international markets, where Medtronic faces less competition; however, the pace of growth has tapered off in recent quarters, potentially in anticipation of launch of MiniMed 780G (and no way to upgrade 670G to the 780G algorithm).

Medtronic has the benefit of three years of user and provider experience and has made improvements, particularly around user experience and usability, on its second-generation closed loop system. The company’s press announcement focuses in on usability, noting that “providers will find that managing patients on the system is simple” with only a “few settings.” On the patient side, Medtronic gives quotes from clinical trial participants that MiniMed 780G “made life with diabetes and control so much easier” and made ‘life significantly easier.” At DiabetesMine’s Closed Loop Showcase in November, Medtronic engineer Lou Lintereur showed promising patient-satisfaction metrics from a pre-pivotal study (n=12), with all patients reporting the system was the best they had every used. Seven of 12 participants rated their likelihood of recommending the system to a friend as 10/10 and eight out of 12 said the system “far exceeded expectations.” We’ll undoubtedly be keeping an eye out for patient and provider satisfaction metrics and usability when Medtronic reads out its trial data this weekend.

The addition of Bluetooth connectivity to 780G’s pump catches the hardware up to Tandem’s t:slim X2 pump. With Bluetooth, Medtronic will be able to offer remote software updates to its pumps, partially mitigating the effect of users waiting to purchase pumps until “the next, newest system” comes out. Medtronic’s marketing compares the software upgrade experience between MiniMed 780G and Tandem’s t:slim X2, noting the 780G has “Wireless/Over the Air” updates, while t:slim X2 has “Wired” updates. Overall, we don’t see this as a huge differentiator for patients as both pumps will be updateable at home and software updates are infrequent. With Bluetooth connectivity, MiniMed 780G will also be able to use their smartphones as secondary displays for pump data, in addition to wirelessly uploading their pump data, a feature that is especially important for pediatrics (and parents) and providers. Presumably, the Bluetooth connection would also give the 780G the technical capability for smartphone pump control (e.g., delivering a bolus from the phone), though Medtronic has not officially announced any intentions to bring smartphone control until its next-generation “Personalized Closed Loop” system (see below). 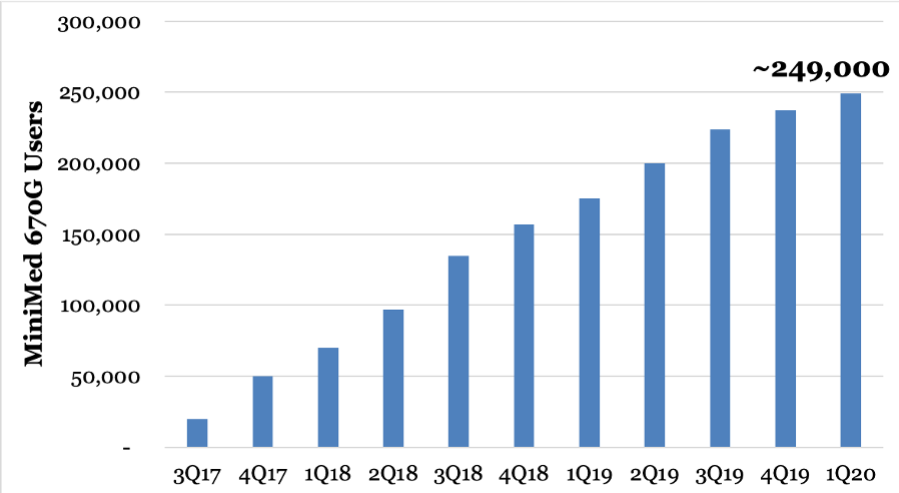 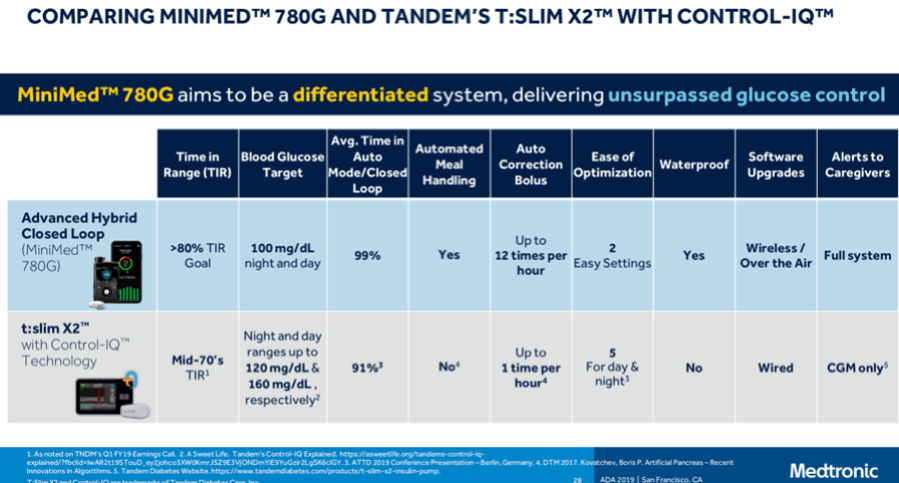 What’s Next for Medtronic? 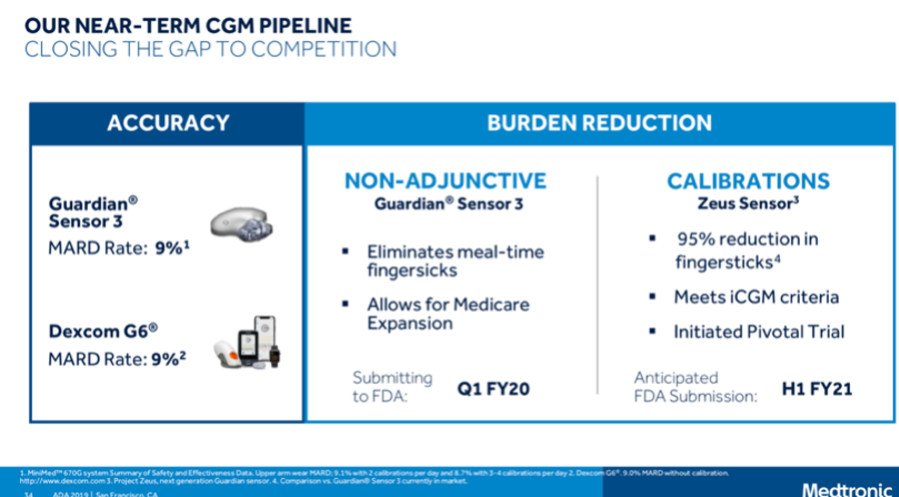 This weekend’s ADA 2020 will feature several abstracts related MiniMed 780G. Click here for our full preview of ADA 2020 and our ADA 2020 Resource Hub. The times below are in US Central time.