Valeritas reported its 1Q18 financial update in a call led by CEO Mr. John Timberlake. The company posted revenue of $6.1 million, marking the third consecutive quarter of record-high sales and the first time breaking $6 million. Revenue grew a whopping 32% YOY on an easy comparison to an 8% decline in 1Q17. Sales increased 5% sequentially from the previous record high of $5.8 million in 4Q17. During Q&A, Mr. Timberlake noted that increased volume drove ~55% of YOY growth, while slightly increased net selling price contributed the remaining ~45%.

Valeritas ended the quarter with $14.5 million in cash, reflecting an $11.5 million burn in 1Q18. Following net proceeds of ~$24.1 million from the company’s recent public offering, total cash and cash equivalents more than doubled to $36.4 million as of May 7. During prepared remarks, CFO Mr. Erick Lucera noted that the cash raised will go towards working capital and “other general corporate purposes.” At the current burn rate, the company has ~3-4 quarters of cash on hand.

Mr. Timberlake emphasized V-Go SIM’s “very slim profile” – a critical feature in remaining attractive to the type 2 market. He also characterized “simplicity of use” as a “key component” for V-Go SIM, underscoring that the objective is not “to micromanage each dose,” but rather to discretely capture information for patients and providers capable of driving periodic behavior change. Although patients will have free Glooko access, during Q&A, Mr. Timberlake stipulated that cost for providers will be determined “on a physician basis,” as many clinics already use Glooko. As a reminder, BD’s Swatch type 2 patch pump and Insulet/Lilly’s U500 Omnipod – both with connectivity – are expected to launch by “September 2019” (BD) and in “2019” (Insulet). Go-to-market strategy will be critical for all of these products. V-Go and Insulet already derive some of their business through retail pharmacies, and it sounds like BD will strive to do the same with Swatch – this trend should reduce the friction of obtaining pump supplies (relative to DME). Boy is there a lot happening in this field.

Mr. Timberlake noted that along with Puerto Rico and Italy, Valeritas recently signed V-Go distribution agreements in Australia and New Zealand. A launch “at some scale” is expected in Australia and New Zealand before the end of 3Q18. Puerto Rico sales are not expected to generate meaningful revenue until 4Q18, while a V-Go launch in Italy is anticipated for after the summer. During Q&A, Mr. Timberlake remarked that “meaningful” international revenue is not expected until 2019. 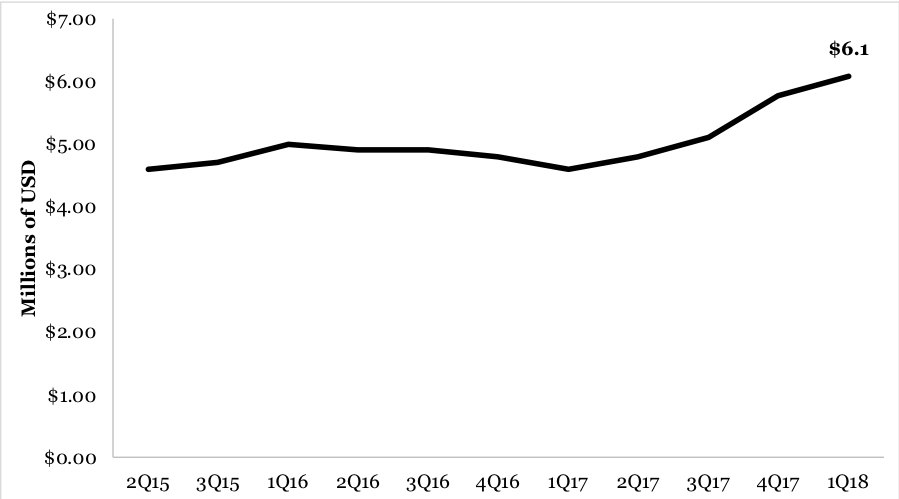