In a major win for the entire diabetes community, FDA announced today that it has approved Lilly’s nasal glucagon as the first-ever severe hypoglycemia emergency treatment that does not require an injection. Accompanying the approval was the reveal that nasal glucagon will be marketed under the trade name “Baqsimi.”

The approval of nasal glucagon represents a major step forward in both the treatment of hypoglycemia and the overall glucagon landscape. Current glucagon reconstitution kits are cumbersome, time-consuming, and error-prone, as they require mixing and injecting steps that often cannot be performed by the individual experiencing the hypoglycemic event. By contrast, Baqsimi will come in a single-use dispenser that can directly administer nasal powder glucagon without the need for preparation or injection. As a result, we see enormous potential for nasal glucagon to help patients and caregivers address hypoglycemia swiftly in everyday settings, therefore avoiding expensive hospital visits. It’s safe to say that people with diabetes and at risk for hypoglycemia—namely those on insulin or a sulfonylurea—have been waiting for this product for quite some time. We are very interested to understand a little more about the dimensions of the product and the environmental impact of a single use product, which historically people with diabetes are not particularly excited about.

As a reminder, Lilly acquired worldwide rights to nasal glucagon from Locemia in October 2015. At the time of acquisition, Locemia had already completed phase 3 studies of nasal glucagon in both adults (see coverage from ATTD 2015) and pediatrics (see coverage from EASD 2015), showing glucose-raising equivalency to injected glucagon. Real world data for nasal glucagon was also presented at ADA 2017, showing that 96% of patients experiencing hypoglycemia recovered within 30 minutes following treatment and that most of the caregivers were highly satisfied with the device. For more on the clinical trial data supporting nasal glucagon’s approval, we point to this valuable review from Yale’s Dr. Jennifer Sherr at ATTD 2018.

Very notably, nasal glucagon’s approval marks the first such approval to emerge from the next-generation glucagon landscape. Elsewhere in the landscape, Xeris has also submitted its Gvoke HypoPen (liquid-stable glucagon autoinjector) to FDA, and a decision is expected in September 2019. Zealand also has its HypoPal glucagon rescue pen (liquid stable dasiglucagon) and is targeting an early 2020 NDA submission. Lilly has also submitted nasal glucagon to EMA, and a decision is expected soon. 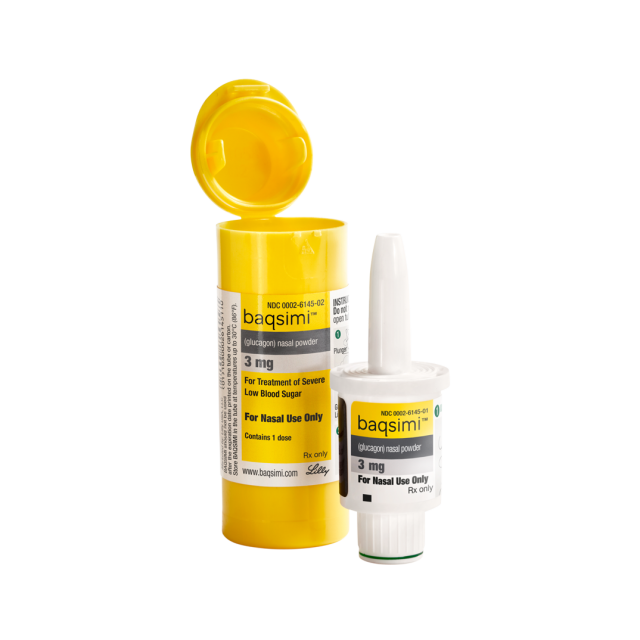 --by Martin Kurian and Kelly Close