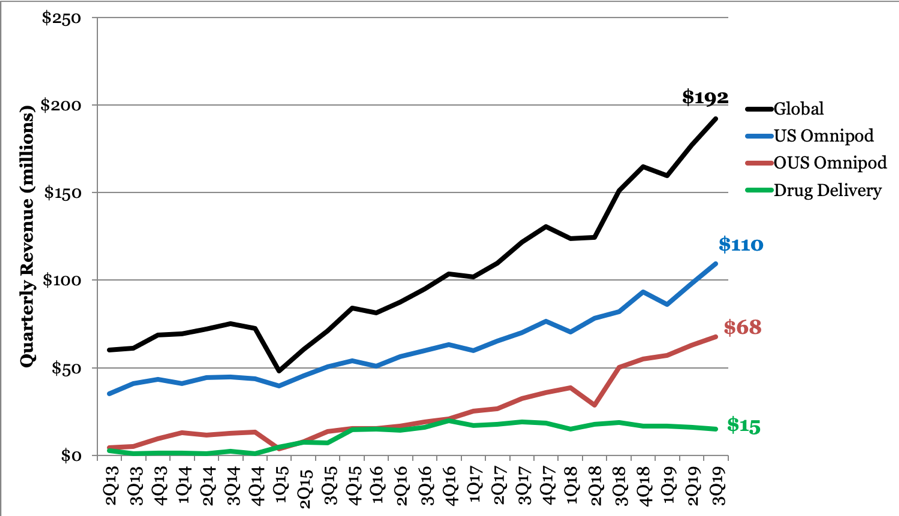 Insulet reported global revenue of $192 million in 3Q19, rising 27% YOY on a tough comparison to 24% growth in 3Q18. Impressively, 3Q19 revenue came in $11 million above than high-end revenue guidance given in 2Q19. US Omnipod sales drove most of the guidance beat, crossing the $100 million mark and totaling $110 million in the quarter (+34% YOY). For the first time since 2Q18, US Omnipod growth drove the majority (61%) of the quarter’s overall growth. Insulet has posted five consecutive quarters of >20% revenue growth and is on track for a fourth consecutive year of >20% annual revenue growth. Omnipod is also continuing to expand the pump market, with “75%-80%” of new US users coming from MDI – in line with rates Insulet has shared in the past and well ahead of Tandem’s “approximately half.”

Insulet recorded its fifth consecutive quarter of profitability, with net income coming in at $0.9 million. Gross margin fell slightly to 64% from 66% in 2Q19 and 67% in 1Q19, though the drop was guided for as Insulet invests in its new highly automated US manufacturing line. Insulet ended the quarter with a remarkable $637 million in cash, up from $372 million at the end of 2Q19. The company completed an $800 million convertible note raise in the quarter, which netted $240 million in cash after most of the proceeds were used to re-purchase existing notes. Insulet got the new notes (due in 2026) at a very attractive interest rate – just 0.375% - compared to the prior notes that were due in 2021 at 1.25% interest. In essence, the company raised significant non-dilutive cash at very attractive terms. Insulet now has plenty of financial flexibility to make significant investments in its manufacturing and supply chain operations. Could we see it pursue M&A – e.g., CeQur? Valeritas?

After Insulet’s first highly automated manufacturing line came online in 2Q19, a second line is now being installed. The second line is expected to produce product by mid-2020, and a third line is also planned to come online in 2020. The new automated lines are part of a $200+ million investment to move Insulet’s global headquarters to Acton, MA. The new lines will drive redundancy in the supply chain and are expected to be “the single largest contributor” to Insulet ultimately reaching its 2021 goal of 70%+ gross margins.

1. Omnipod Dash Made Up ~50% of New Customers, Helping Drive 20% of Total US Volume Through Pharmacy Channel

In its second full quarter of availability, uptake of Omnipod Dash is humming along, making up “approximately 50%” of new customer starts in the quarter, up from “more than one-third” in 2Q19. CEO Shacey Petrovic stated that physicians are recommending Dash to more MDI users, “particularly type 2 patients.” Indeed, prepared remarks and Q&A repeatedly noted the “significant increase” in type 2 diabetes users (not quantified, but very exciting and a major win for the pump industry), including in the Medicare population.

2. Limited Launch of Dash in “Select European Markets” Next Month

Omnipod Dash will be launched across Europe “throughout 2020,” with a “limited market release” of Dash in “select European markets” to commence next month (December). We did not hear much on the size or locations of the limited release, but Ms. Petrovic did note that 2020 efforts will mostly focus on current countries. New international expansion with Dash is not expected to add “meaningful incremental revenue” in 2020. Given how well Insulet’s OUS business is doing, we have to imagine Dash will only buoy sales – especially as Tandem expands internationally with Basal-IQ. Insulet’s 1Q19 call expected Dash’s roll-out to begin in “early 2020,” though we didn’t heard the word “early” in either today’s call or in 2Q19. As of the 3Q18 call, Insulet had received a CE Mark for the Dash system in Europe.

Insulet continues to support Omnipod integration with Tidepool Loop – the vision of an interoperable AID app accessible through the Apple App Store and compatible with many ACE pumps and iCGMs. Insulet was the first Tidepool Loop partner (one year ago, nearly to the day), and Omnipod Dash’s interoperable ACE Pump designation (FDA cleared in September) was a critical step towards this vision. At ADA in June, both Dexcom (G6 iCGM) and Medtronic (future ACE Pump and iCGM) signed on to integrate with the app.

In a call with significant focus on use of Omnipod in type 2 diabetes, there was not a single mention of the Lilly-partnered U500 and U200 Omnipods – neither in prepared remarks or Q&A. As of August, the Lilly U500 Omnipod had been submitted to the FDA; we assume it remains under review. The lack of updates was not a surprise, as Insulet has consistently devoted less airtime to this partnership – quite understandable, since Dash (U100) is appealing so well to the type 2 population. In January at JPM, management expected a U500 Omnipod launch by the “end of 2019/early 2020” – timing that is still within reach. Presumably we’ll hear the next update at JPM, unless the U500 Omnipod is cleared beforehand.