Hello from The Lodge at Torrey Pines in La Jolla, CA, where JDRF just held its annual Mission Summit! See our top highlights below.

In a well-attended session just before lunch, JDRF CEO Dr. Aaron Kowalski and T1D Fund Executive Chair Sean Doherty gave an update on the venture philanthropy fund, which Mr. Doherty called “the most impactful venture philanthropy fund in disease right now.” Now more than three years old, the T1D Fund has almost $100 million under management and has made $50 million in investments across eighteen companies. Looking ahead at 2020, Mr. Doherty said he expects the fund to make ~$30 million investments. For comparison, at last year’s JDRF Mission Summit, the Fund had raised $70 million and investments in twelve companies. As a reminder, the Fund invests in three categories: (i) Improving Lives, (ii) Beta Cell Therapies, and (iii) Immune Therapies. It’s worth noting that the T1D Fund’s Portfolio page only lists 15 investments – unlisted are two legacy investments that JDRF had before the Fund’s creation (AnTolRx and Capillary Biomedical) and one investment that has not yet been publicly announced. The three new investments listed on T1D Fund’s website include one immune therapy company (IM Therapeutics), one beta cell therapy company (Veralox), and one improving lives company (Biolinq).

In the Mission Summit’s final breakout session, T1D Fund Managing Directors Steven St. Peter and Katie Ellias hosted a panel with Provention CEO Ashleigh Palmer, Pandion CSO Jo Viney, and Biolinq CEO Jared Tangney. The panel was very interactive, with lots of audience members excitedly chiming in with questions for the company leaders throughout. Interest was perhaps highest in San Diego-based CGM company Biolinq, especially after Mr. Tangney held up a version of Biolinq’s CGM, a thin and attractive, bright blue, hexagon-shaped device with no needles. Right after his introduction, an audience member asked about the cost and reimbursement for the device. The fully-disposable patch will have Bluetooth connection and is intended to be priced as “one of the lowest-priced devices out there.” Mr. Tangney talked about some of the benefits of being a later-stage player in the CGM field, including the ability to use existing reimbursement structures and to learn from Abbott and Dexcom on the importance of manufacturing scalability and securing partnerships with pump companies. When asked about accuracy, Mr. Tangney stated that Biolinq was aiming to meet iCGM special controls. In terms of timeline, the company has a “few more trials this year” and plans to complete a pivotal trial with FDA submission by the “end of next year.” As a needle-free device, Mr. Tangney said the user experience would be Biolinq’s key differentiator – he compared the device’s insertion process to putting on a Band-Aid. T1D Fund made its investment in Biolinq earlier this year, as part of $15 million Series A. The fund’s investment was a big vote of confidence, as the T1D Fund is known for its experts and diligence on its investments, and the CGM landscape is littered with discontinued projects (see out full CGM landscape here). Additionally, Mr. Tangney thanked JDRF for its work with the FDA in creating the iCGM classification and defining the regulatory pathway for CGMs.

5. Glucose Control and Complications Panel Focuses on SGLT-2s in Type 1s and Psychosocial Issues as Flashpoints for Treating Diabetes Better

Though the tagline for JDRF’s 2020 Mission Summit was “Laser-Focused on Cures,” one valuable breakout session was dedicated to treating diabetes better. Dr. Jeremy Pettus (University of California, San Diego) spent time highlighting the fact that people with type 1 diabetes who achieve an A1c target <7% still have a two-fold risk for cardiovascular disease. According to Dr. Pettus, the high levels of subcutaneous insulin used by type 1s may potentially explain this increased cardiovascular risk. Thus, Dr. Pettus and others on the panel (Dr. Jill Weissberg-Benchell (Lurie Children’s Hospital), Ms. Cynthia Rice (JDRF), and Dr. Andrew Rakeman (JDRF)) spent time talking about treating type 1 diabetes beyond simply high blood sugars. Dr. Pettus specifically brought up the potential for using SGLT-2 inhibitors in people with type 1, as the drugs could have an effect beyond lowering blood sugar, namely cardiovascular and renal protection. This is particularly true in light of Dr. Pettus’ statement that he believes people with type 1 will likely be more successful taking less insulin, as long as hyperglycemia can be avoided – he believes that more insulin will be more inflammatory, as we understand it.

Although JDRF and other patient advocacy groups have not yet been successful in working together toward a common goal in 2019 surrounding approval of SGLT-2s for type 1 (the FDA panel voted 14-2 against approval for BI/Lilly on November 13, 2019, and issued a CRL against approval for Lexicon’s sotagliflozin in type 1 on March 22, 2019, and another CRL against approval for AZ’s dapagliflozin on July 15, 2019), we were glad to hear this was a priority and still believe FDA approval could be possible – we believe it will benefit from collective action. Notably, Dr. Pettus also noted that obesity is increasingly affecting the general societal population broadly, but also people with type 1 diabetes. Dr. Rakeman chipped in also, noting that for JDRF, “treating diabetes better” was as equal a priority as curing diabetes. On the advocacy front, moving forward, JDRF has taken a “multi-prong” approach on SGLT-2s in type 1s, looking at both scientific and education initiatives to reduce DKA incidence (there is lots of valuable work going on in the EU on this front) and meeting with the FDA to get the drug class approved for type 1s. JDRF’s Cynthia Rice highlighted how broad the coalition JDRF is building is: “We’re enlisting clinical organizations, members of Congress, the people with diabetes community, private sector, and constantly getting allies.”

6. Keynote Address: Dr. Chad Cowan on Cell Therapies and Potential of “Cloaked” Cells in Type 1 and Beyond

Harvard’s Dr. Chad Cowan provided a “big waterfront view” of all things related to cell therapies in type 1 diabetes. Dr. Cowan focused his talk specifically on biological immune protection – in other words, manipulating stem cells to forego detection by the body’s immune cells. Dr. Cowan framed this idea by asking the audience, “What if we had ready-made components to transplant into people?” He explained the concept of “cloaked” stem cells that are able to evade and be protected from the immune system and therefore would not require any encapsulation or parallel immunosuppression. Of course, this ideal has not yet been achieved, although several labs are making good progress. The immense challenge of this problem lies in the fact that the immune system itself is “devilishly tricky,” in Dr. Cowan’s own words. His lab has pushed forward on a two pronged approach that involves both immune evasion and immune protection. Evasion has proven to be an easier task, as it involved taking down the “billboard” HLA system. 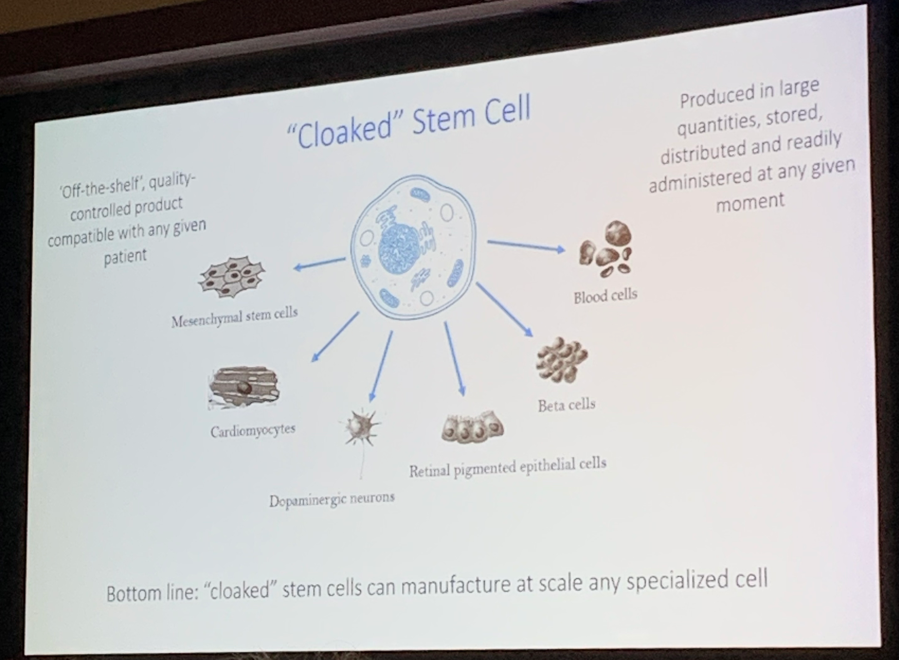 Dr. Aaron Kowalski: Can you talk about the concern when “cloaking cells” and the risk for cancer?

Dr. Cowan: That’s a great question. Some of these molecules that protect cells from the immune system are also involved in cancer. The same things that are protecting the cells by having them evade the immune system might also be making them one step to becoming cancerous. There is however no evidence that these cells cause cancer in the first place – there are not too many cases where beta cells themselves are the cause of cancer. The way I like to think of this is if you would do this for your child or loved one – do you feel safe? With the right experimentation, the right set of studies, we can get to the point where you might get to that point where you do feel safe. But it does take time. People are doing these studies now and we are going to get a ton of information. It is possible engineering “kill switches” into the cells and make them sensitive to certain drugs, such that if something went wrong, we would give the patient these drugs and it would eliminate the cells.

Dr. Kowalski: I’m a big believer in lots of shots on goal. We still don’t know everything we need to know concerning doses and quantity of cells. If the trials that Semma are doing, where they put in a functional dose and it lasts for a year, work, then we are going to learn a ton.

Q: Where else is JDRF funding this type of work?

Dr. Kowalski: Cell replacement is a top priority of ours. Some of you may have heard me give this anecdote before, about James Shapiro in Canada. He was a pioneer of islet transplantation. He said to me, “I know JDRF isn’t focused on this anymore, but remember that it does work.” He went on to tell me that he has patients off of insulin with normal blood sugars for 17 years. This can work – these cells can cure type 1 diabetes. We thought when we did that in the 90s that it would be scalable and cure everyone. Two big issues of course are cell sources and protection.