Early this morning, we learned that EMA’s CHMP has recommended approval of AZ’s SGLT-2 inhibitor Forxiga (dapagliflozin) for use as an oral adjunct for adult type 1 patients who “fulfil certain requirements” and have a BMI ≥27 kg/m2. AZ filed for a type 1 indication with EMA back in March 2018 (~11 months ago) – now the European Commission will decide whether or not to adopt the recommendation (it almost always does), at which point the finer details of the limited approval recommendation will become available. To paraphrase what an AZ rep told us that, if all goes without a hitch, a ratified recommendation should be in hand before ADA in June 2019. See CHMP’s opinion and AZ’s press release.

CHMP’s opinion apparently breathes life back into the movement to bring SGLT inhibitors to people with type 1 diabetes following what can be best described as a complex sotagliflozin (Sanofi/Lexicon SGLT-1/2 dual inhibitor) FDA Ad Comm meeting – capped by a split 8-8 Committee vote. Depending on sotagliflozin’s fate (FDA’s PDUFA date is March 22) and EMA’s final rule, either drug could be the first-to-market oral adjunct therapy for type 1 diabetes in the US or Europe. The CHMP vote is only a vote! As a reminder, Astellas Pharma’s SGLT-2 ipragliflozin was recently approved for type 1 in Japan based on a small study of only 115 participants given ipragliflozin for 24 weeks and 59 given placebo.

Beyond the positive recommendation, the implementation of a BMI cutoff as a DKA risk mitigation technique was easily the most unforeseen aspect of the opinion – we don’t recall hearing the strategy raised even once at the sotagliflozin Ad Comm! But it makes a lot of sense. For context, 27 kg/m2 falls in the middle of the “overweight” range (25-29.9 kg/m2), and below the threshold of obesity (which starts at 30 kg/m2). It’s not clear at this point how this seemingly arbitrary cutoff was derived, but we imagine there may have been a reduced DKA signal in the group with BMI ≥27 kg/m2 in pooled phase 3 DEPICT-1 and DEPICT-2 data. [As far as we know, the published DEPICT-1 data doesn’t break out DKA by BMI level.] A BMI ≥27 kg/m2 could be protective of DKA for any number of reasons or confluence thereof; said Dr. Charlie Alexander, “It is possible that a higher BMI may reduce the risk of DKA due to the insulin resistance that usually accompanies that BMI level. Those with less insulin sensitivity need more total daily insulin and it is possible that they may also be less prone to develop ketosis/DKA. Hopefully, someone has data to support those ideas.” It could also be that DKA risk is similar across BMI, but CHMP members determined the weight loss benefit from SGLTs at higher BMIs to substantially augment the benefit side of the equation in type 1s with overweight/obesity.

To the latter point, recent literature has called attention to the growing problem of excess weight among type 1s: The most recent batch of T1d Exchange Registry data shows that 49% of patients (n=10,249) are classified as living with overweight or obesity. A separate study published last month (Fellinger et al.) suggests that Austrian type 1s have significantly higher BMI values than the general population. For context, the average BMI in DEPICT-1 was ~28 kg/m2. All of these data roughly position CHMP’s decision as making Forxiga potentially available for somewhere in the neighborhood of half of type 1s – a great start!

Ultimately, we’re ecstatic that the Committee (and AZ) found a creative way to recommend this therapy for at least a subgroup of type 1s; we further applaud them for making the condition rely on an easy-to-calculate and -understand metric. We’d also note KOLs have indicated via email that it likely won’t be impossible for someone with BMI <27 kg/m2 to gain access to Forxiga, it will just remain off-label (and presumably out-of-pocket). Finally, one might expect AZ to have plans to demonstrate safety in this initial population before seeking an expanded indication.

Nevertheless, we are quite surprised that CHMP came to decide on a BMI cutoff as its primary selection criteria. In the recently published Diabetes Care paper representing international consensus on DKA risk mitigation with SGLT inhibitor use, over 20 thought leaders coalesced around the following risk factors – see table 2 below. Notably, a low BMI of <25 kg/m2 is only listed as a “minimal/low” risk for DKA. To be sure, it’s entirely possible that sub-analysis of pooled data from the DEPICT program may have uncovered a reduced DKA signal in the BMI ≥27 kg/m2 population. Moreover, many of these listed risk factors are not inherently patient characteristics, but rather detail acute events that can increase DKA risk (such as reducing basal insulin by too much or experiencing a pump failure). Still, it’s clear that uncertainty still abounds when it comes to patient selection for DKA risk mitigation, and we’re eager to see what data led CHMP to reach their conclusion. 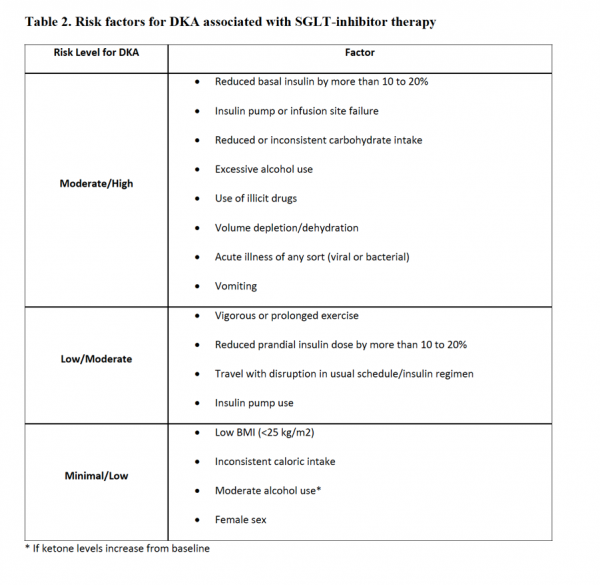 A few KOL’s sounded off on social media in response to the news, with Dr. Dan Drucker calling the opinion “huge news” and Dr. Thomas Danne dubbing it “a milestone nearly 100 years after insulin.” Notably, Dr. Drucker also wondered aloud whether this positive opinion might spur AZ to also invest in a type 1 CVOT for dapagliflozin – as we’ve written many times, we would love to see a type 1 CVOT, given the potential public health gains.

As a reminder, dapagliflozin is concurrently under regulatory review for type 1 diabetes in the US and Japan.  One has to wonder whether approval in the US or Japan will subsequently include the same BMI ≥27 kg/m2  limitation, or if that limit will just apply to the EU.

Read on for a list of CHMP’s other recommended conditions for use in type 1 and implications for sotagliflozin in the US.

CHMP’s other considerations for Forxiga use in T1D

These considerations for “patient selection” are also extremely important, and it is our understanding that they haven’t all been defined to the same extent as the BMI guideline. For example, what is considered “low” insulin requirement? How strong is the recommendation against prescribing Forxiga by a non-specialist doctor, and does AZ have plans in place to change this to eventually broaden access? How are patients advised to track and control ketone levels in their body (Urine? Blood? How frequently?). What cut-off points for ketone levels should patients recognize along the spectrum of ketosis to DKA? And whose job is it to educate patients about how to recognize and prevent DKA? Many of these specifics have yet to be made public.

Indeed, there is no Forxiga label yet: the European Commission must still ratify the recommendation. It is possible but less likely that there will be additional changes. There are still a number of outstanding questions, including: (i) The dosing (5 mg or 10 mg; CHMP’s opinion might be interpreted as including both); (ii) specific instructions for ketone testing (e.g., blood vs. urine); (iii) any plans for post-market surveillance or subsequent indication expansion; and (iv) risk mitigation and patient education strategies.

Implications for SGLT Inhibitors in Type 1 in the US