This afternoon, Medtronic announced long-awaited FDA approval of its standalone, Bluetooth-enabled Guardian Connect mobile CGM. A US launch of the sensor and Guardian Connect app on Apple iOS is expected in May-July of this year, the start of Medtronic’s FY19 and in time for Guardian Sensor 3 manufacturing to meet unconstrained demand (per Medtronic’s 4Q17 call). It will initially be a limited launch, followed by broader availability in August-October. The long-awaited Sugar.IQ app (powered by IBM Watson) will launch as a separate companion app on Apple iOS that runs alongside the Guardian Connect app, providing patterns and insights – “Meet Your Personal Diabetes Assistant.” The two products will launch together.

According to the FDA database, approval actually came through last Thursday, March 8 – exactly two years to the day following PMA submission. This launch will come more than a year later than the June 2016 Analyst Day predicted (by April 2017); on the plus side, it’s on par with last month’s expectation to launch “shortly,” and on the early side of the JPM expectation to launch in FY18/FY19 (May 2018-April 2019).

Guardian Connect is approved for patients age 14-75 years with an adjunctive label to complement standard home blood glucose monitoring devices – i.e., not for insulin dosing, as expected given use of the same Guardian Sensor 3 as in the MiniMed 670G. Guardian Connect still requires two fingerstick calibrations per day, has a two-hour warmup, is worn for seven days, and is approved for both abdomen- and arm-wear (per the late February expanded indication). The mobile CGM updates the familiar rechargeable clamshell transmitter to include Bluetooth.

One of the biggest news items in this approval is what it doesn’t include: a dedicated receiver! Guardian Connect will be the first CGM to launch in the US where smartphone display is the only option for viewing data. This is a victory and a regulatory milestone: it reduces the hassle and cost of getting on the system for patients (especially relative to Dexcom’s G5, which requires a receiver), it reduces Medtronic’s need to maintain additional hardware, and it means no gaps in data downloading (users’ mobile CGM data will be sent straight to CareLink). It also shows further FDA comfort with smartphone display of CGM data.

Guardian Connect has a MARD of ~9% (arm wear) and 10.6% (abdomen wear), with ~88% of values within 20%/20 mg/dl of YSI – see the pivotal data from ADA 2016 and the arm-wear data shared in late February. Guardian Connect users may also be requested to provide “occasional diagnostic calibrations.” The 3-4 calibrations per day in the 670G/Guardian Sensor 3 label does not apply here, as Guardian Connect is not powering a hybrid closed loop – good news for Medtronic.

This approval reflects a two-year FDA review (to the day!) following submission on March 8, 2016 – the longest review of a CGM device we can recall in recent memory, especially given the remarkably quick three-month review for the MiniMed 670G/Guardian Sensor 3. We assume the smartphone-only display in Guardian Connect was a major item of discussion, given how new that is for the FDA and for Medtronic. We also wonder if Medtronic had a learning curve to climb on building a Class III CGM display smartphone app – building and maintaining such apps is onerous, especially with the faster-moving cycles of consumer electronics, nuances with phone sound settings, etc. (This was a big learning when Dexcom’s G5 app launched in late 2015.)

Medtronic already has sharp webpages up for Guardian Connect and Sugar.IQ with Watson (see screenshots below). The marketing focuses on a “smart CGM,” given Guardian Connect’s predictive alerts for highs and lows – these come 10-60 minutes before a high or low is predicted to occur, ahead of Dexcom’s current threshold-based alerts. Medtronic says Guardian Connect accurately alerts for 96%+ of hypoglycemic events that actually occur, though the window is quite generous: “within the 15 minute period before or after your blood sugar goes below 70 mg/dl.” This high level of prediction makes for great marketing, but the nuisance factor will be critical to assess in real-world use; the false positive rate is not disclosed, but we’d assume it’s fairly high with a 60-minute horizon and without passively collected insulin-on-board information. Obviously these can be turned on or off as desired.

Sugar.IQ will exclusively be offered for free to Guardian Connect users, meaning 670G and non-Medtronic-CGM users will not have access to the IBM Watson-powered app at launch. This app could emerge as the single biggest driver of this product’s success and differentiation vs. G5 and Libre. (The main other advantage for Guardian Connect is no required receiver.) Sugar.IQ’s user experience looks identical to what we’ve seen at conferences over the past two years (DTM, ADA) – a mix of a chat-like interface with Watson insights and colorful data displays. We wonder if Medtronic will make Sugar.IQ available to other CGMs in the future, perhaps charging a monthly subscription fee for users – this would actually allow it to capture revenue from superior CGM analytics software, even if a user is on another company’s CGM.

Unquestionably, Guardian Connect will be a very big US launch for Medtronic, marking the company’s entry into the standalone real-time CGM market – key for driving outcomes in MDI users, for competing with Abbott’s FreeStyle Libre and Dexcom’s G5, and for reaching its ambitious goal of 20 million patients by 2020. The standalone real-time CGM market is faster-growing and has more globally runway than pumps, but it’s also a new foray for Medtronic – can it transform itself into a CGM-driven business? Can it match the features in G5/G6 and Libre in subsequent generations? 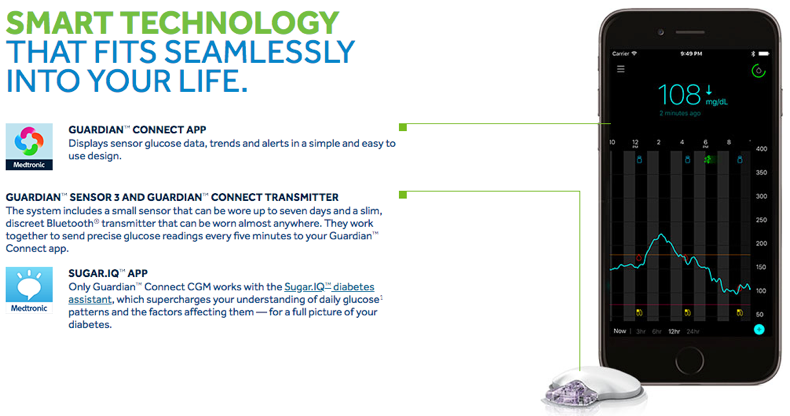 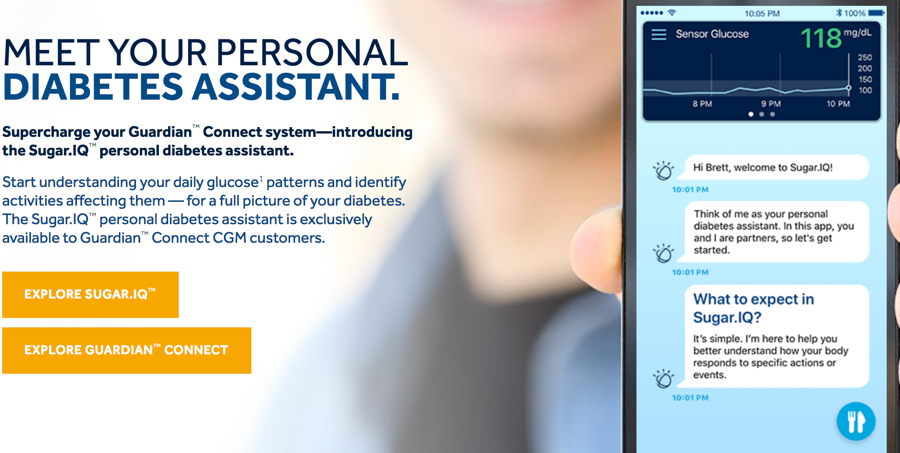 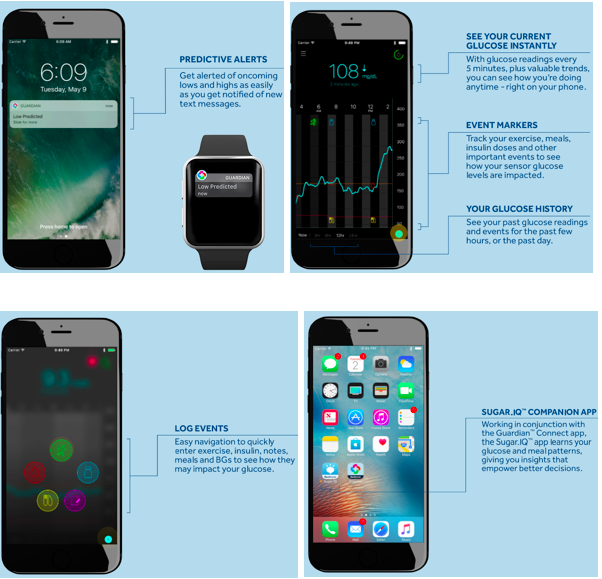 Q: How will US users evaluate Abbott, Dexcom, Medtronic, and (possibly) Senseonics’ standalone CGM systems? Who will add the most users this year in the US?

Q: Will Sugar.IQ be a differentiator for Guardian Connect? Will it be a compelling reason to choose Guardian Connect over other sensors? Will it see sustained use and engagement, given the need to open a separate app?

Q: How far behind is an Android version of Guardian Connect? Will Medtronic’s partnership with Samsung accelerate progress here?

Q: How quickly will Medtronic update the MiniMed 670G/Guardian Sensor 3 to add Bluetooth and remote monitoring? Will this be out before a competitive hybrid closed loop is available in the US?

Q: Where is Medtronic on reducing daily calibrations and moving to a disposable transmitter for its real-time CGM? How far behind Dexcom’s G6 will these come?

Screenshots of Sugar.IQ Insights from ADA 2017 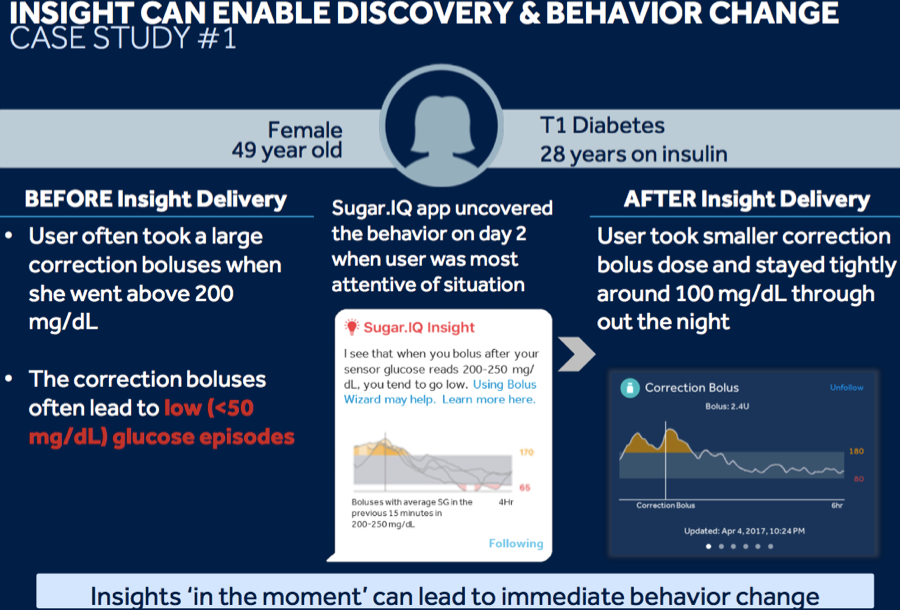 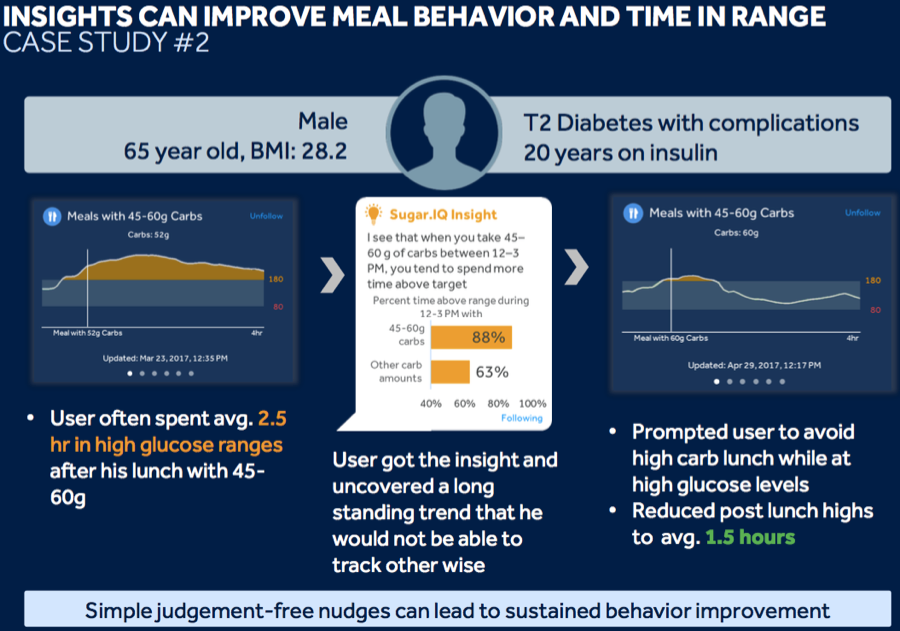 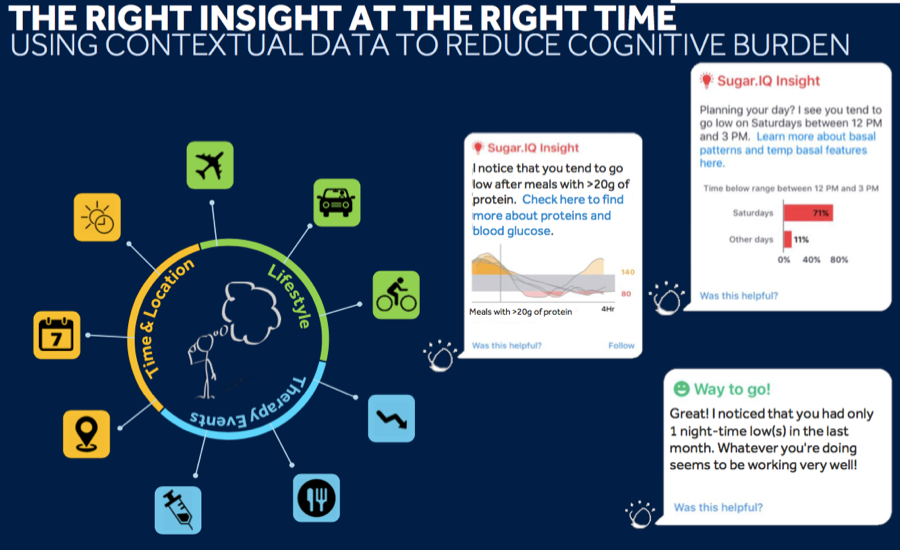 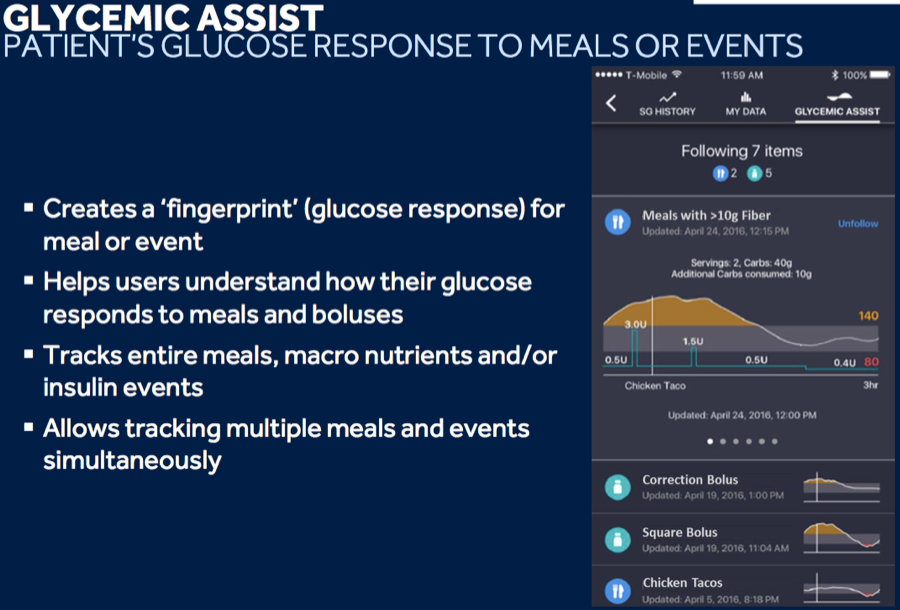