Insulet and Ypsomed both announced on Friday that their current global distribution agreement for the Omnipod will expire on June 30, 2018. Starting July 1, Insulet will assume all Omnipod distribution, sales, marketing, training, and support activities in Europe – going direct as it has in Canada will obviously offer Insulet more distribution control and higher margins, though obviously it will also take on more internally. This deal is a definite loss for Ypsomed, as the Omnipod drove an estimated CHF 120 million in annual sales (~$127 million) and CHF 24 million (~$25 million) in annual operating profits in FY17.

Insulet will compensate Ypsomed ~$50 million to assist in the establishment of European distribution structures, enabling Insulet to go direct on its own. In a smart move to align incentives, the final compensation from Insulet will depend on the number of patients using Omnipods sold by Insulet in the 12 months after distribution resposibilities shift hands in mid-2018 – a very strategic play to ensure Ypsomed continues to prioritize the Omnipod while the deal is still in effect for another year.

We had been expecting this news based on recent Insulet commentary and ever since Ypsomed launched its own tubed YpsoPump in FY17 with similar ease-of-use marketing to the Omnipod – that created strange financial incentives in our view.

According to Ypsomed’s press release, the companies could not agree on a contract extension “as the price demanded by Insulet Corp. would have made continued economic viability impossible.” Insulet has long been dinged by investors for the lower margins through this distribution deal, and presumably the companies could not agree on the right transfer pricing to move forward. Once Insulet’s direct EU operations are established, management expects it will be accretive to earnings, with plans to still be EBIT positive in 2018. Insulet investors clearly liked the news (better margins for Insulet, more control), as the stock has just hit an all-time high (~$53/share, $3.1 billion market cap). Of course, Insulet will also need strong execution as it takes all these functions in-house; on the plus side, it has experience doing this in Canada, going direct in 2015 following the GSK partnership termination.

In an attempt to fill the revenue gap left by the Omnipod, Ypsomed also announced plans to bring its own patch pump, the mylife YpsoPod, to market in the “mid-term.” Following publication, we confirmed this means the second half of 2020 (calendar year). No further details were provided on product design or timing, though this announcement was obviously important to allay Ypsomed investor concerns and fill the product portfolio hole. We’ll be fascinated to follow how quickly this comes to market, since the durable YpsoPump was in development for years and developing/manufacturing a patch pump is probably an order of magnitude more difficult than a durable pump. A lot of things will have to go right for this to go well, but we would not underestimate Ypsomed and its very popular brand.

This partnership, dating back to 2010 under Insulet’s previous management team, has unquestionably been fruitful for both companies. Most recently, Omnipod achieved impressive 67% YOY user base growth in Ypsomed’s FY17, and international Omnipod sales reached an all-time high of $25 million in Insulet’s 1Q17 for the fourth straight quarter. Given that international Omnipod sales were responsible for 47% of Insulet’s overall 1Q17 growth, it is imperative that as Insulet goes direct, it maintains continued expansion in OUS markets – particularly as the US remains quite competitive. International Omnipod sales are expected to be $97-$100 million in 2017, reflecting +38% YOY growth (vs. $256-$258 million, +14% YOY growth in the US). The global Omnipod user base is expected to reach ~130,000 users by the end of 2017 (+20% YOY), with ~60-65% in the US (~80,000) and ~35-40% outside the US (~50,000). 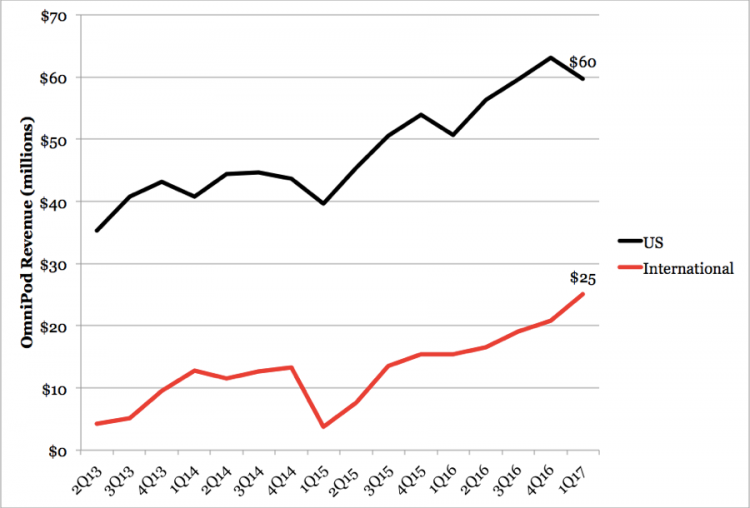 Q: How will the distribution transition affect Omnipod International sales? Will Omnipod sales continue on the strong upward trajectory?

Q: Since this news comes one year before the expiration, does it create any weird incentives for Ypsomed? It’s smart of Insulet to tie Ypsomed’s compensation to the international patient base size, but there could be a free-rider problem here – Ypsomed knows the contract is expiring and could conceivably drive patients to its own pump.

Q: How does international distribution affect Insulet’s cost structure and internal burden? Can management achieve the ambitious goal for no impact on earnings/profitability outlook?

Q: Is Ypsomed considering expansion into the US or Canada? Are there any data concerning the recent soft launch of the YpsoPump regarding uptake.

Q: Can Ypsomed launch a competitive patch pump only three years from now, manufacture it at scale, and compete with Insulet and potentially others?