Just minutes ago, the FDA and Abbott announced approval of the FreeStyle Libre (real-time) Flash Glucose Monitoring system. It is the first factory-calibrated sensor in the US and has achieved the big hope for a non-adjunctive (insulin dosing) claim as a replacement for fingersticks – major wins for people with diabetes to avoid routine fingersticks and a huge sigh of relief.

FreeStyle Libre is approved for 18+ years, upper-arm wear only, and will require a prescription (as expected). The approval comes roughly a year after the product’s 3Q16 submission, and a year after the approval of the professional (blinded, retrospective) Libre Pro.

FreeStyle Libre will be available in major retail pharmacies across the US (!) by the end of the year – mail order will also “technically” be an option, but the focus is on key pharmacy retailers. Abbott’s press release said it will be “at a fraction of the cost of other CGM systems currently available,” and we’ve confirmed cost will be consistent with cash-pay monthly prices in Europe. We’re speculating that this means sensors will go for ~$120/month and readers (one-time expense) will be around ~$60. This pricing is obviously a competitive threat for Dexcom and Medtronic - relative to Dexcom, this would reflect an ~50% monthly price cut with no extended wear (unusual), or ~25% cut with a week extended wear. Read more on the implications below. We’re not sure what the reimbursed pharmacy price will look like, but presumably Libre will have a copay/coinsurance. www.freestylelibre.us is now live and allows patients to sign up for updates. Abbott will even inform a healthcare provider and help with obtaining a prescription - brilliant marketing.

In a material change, FreeStyle Libre is approved in the US for 10-day wear with a 12-hour warmup. The factory-calibrated MARD has improved to 9.7% with these changes. Presumably these changes helped hit FDA’s bar for non-adjunctive accuracy to retain factory calibration – day one has the most challenging accuracy for all sensors, given the wound response. This is a very smart tradeoff in our view, even if Abbott couldn’t retain the OUS version’s 14-day wear and one-hour warmup. With 10-day wear, Libre is still the longest real-time sensor in the US, although we think the majority of patients extend wear for other sensors, particularly Dexcom. Otherwise, FreeStyle Libre has the same slim form factor (~the size of two stacked quarters, fully disposable), still stores eight hours of glucose data on the sensor, does not have alarms, and (notably) doesn’t carry concerns of acetaminophen interference.

Both the FDA and Abbott refer to FreeStyle Libre as a “continuous glucose monitoring” system, a clear win as Abbott seeks to (presumably) use existing CGM reimbursement codes. Outside of the US, Abbott markets the device as a “flash glucose monitor,” more clearly differentiating the on-demand functionality from sensors that send readings to a receiver/phone every five minutes. Libre does continuously capture glucose data, though it won’t have continuous streaming communication with alarms until the next-gen launches (the pivotal with Bigfoot will still happen in 2018).

At US launch, FreeStyle Libre will not have smartphone connectivity via LibreLink (this was not included in the submission), meaning that patients will have to use the “mobile reader” to scan for data. They will also not be able to share data with caregivers via LibreLinkUp – this is another negative, compared to Dexcom, along with the alarms. We imagine it won’t be long before we see these approved, as Abbott is fairly bullish about getting data on the phone, and especially being able to share it with the support network.

The 12-hour warm-up is something people can avoid by acquiring a second reader and overlapping wear times. Since each reader can only be used with one sensor at a time, an in-use reader can’t kick off a second sensor’s warm-up. The obvious solution is for patients to have two readers and alternate them, starting a new sensor’s 12-hour warmup in the last 12 hours of the current sensor’s life. Aside from wearing two sensors, the obvious downside is that data on each reader would only reflect half of the patient’s total glycemic data. (We also assume Abbott can’t encourage this practice, but some patients will do it anyways.) Abbott and FDA will hopefully work together to reduce the warmup time, though perhaps studies or better day-one stability will be needed.

Overall, this is a great day for patients and public health as the move toward CGM as a standard of care further strengthens. We are particularly excited about the potential for prevention of diabetes and diabetes complications for both type 1 and type 2 patients. 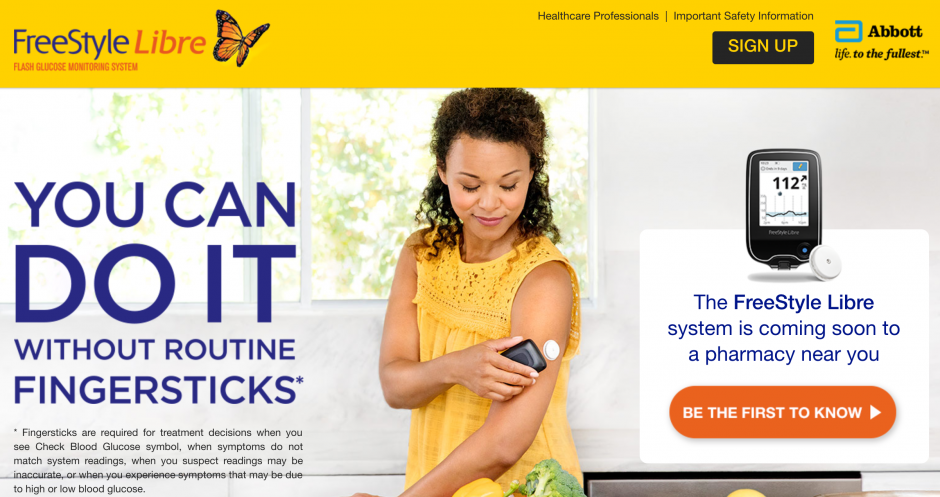 Our Comments on Dexcom’s Stock Price

On the FDA approval news and FreeStyle Libre’s non-adjunctive label, Dexcom’s stock price dropped ~25%, down from ~$67 on Wednesday to the current ~$50. Broadly, we see this as an overreaction from the Street, particularly given the category’s tremendous runway in both type 1 and type 2 diabetes in the US. Below, we discuss both sides.

Libre Pro in the US and Other Background

Close Concerns’ Questions – FreeStyle Libre in the US

Q: How much pent-up demand is there for FreeStyle Libre in the US? How quickly will we see an impact on Abbott’s US sales?

Q: Will patients purchase two FreeStyle Libre reader devices to overlap sensor wear times and avoid the 12 hours without real-time data? (i.e., staggered sensor wear, so the final 12 hours of a current sensor wear overlap with the 12 hours of warmup time for the new sensor – a second reader is required because each reader can only start one sensor)

Q: Is there room to improve the 12-hour warmup near time? How quickly could this happen?

Q: How quickly will Abbott get pediatric approval? Medicare approval?

Q: How quickly will LibreLink come? How will Abbott’s app and data efforts compare to Dexcom and Medtronic? Will these be a key differentiator or ancillary?

Q: How will the US launch of FreeStyle Libre impact Dexcom and Medtronic? Will it impact new patient growth, steal share, or both?

Q: How much will FreeStyle Libre expand the CGM category in the US? Will it drive uptake in type 2, where there is no reimbursement and cash pay is too expensive for current products?

Q: How will patients weigh the different pros and cons of all three major CGM devices – see table above? How will the patients on CGM segment between the three products? How will it change if/when Senseonics is approved in the US?

Q: How will the next-gen Libre with Bigfoot differ from the current  version in the US? When might Bigfoot launch its automated insulin delivery (pump) and MDI auto-titration systems?