Insulet reported 4Q18 results this afternoon in a call led by CEO Ms. Shacey Petrovic (her first as CEO) and CFO Mr. Mike Levitz (his last as CFO). See the key highlights below! 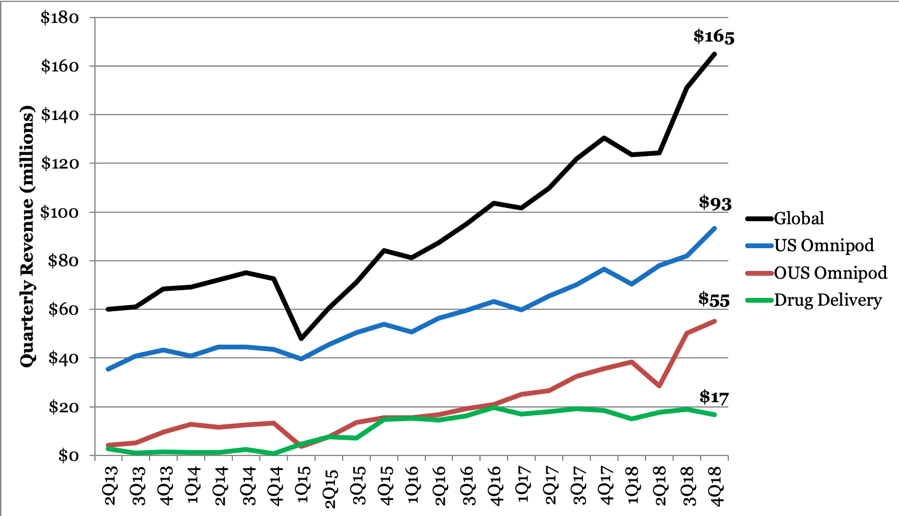 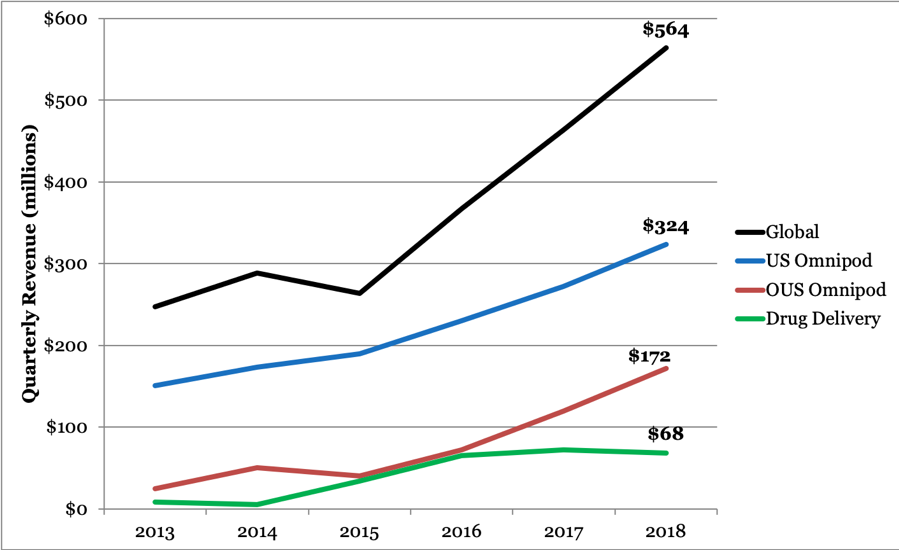 In the second straight record quarter for profitability, Insulet reported net income of $9.9 million, up 6x from $1.7 million in 3Q18 (the first-ever net income quarter). Insulet also hit its goal to reach full-year profitability, reporting net income of $3.3 million for 2018, a remarkable rise from a net loss of $27 million in 2017. Gross margin held steady at 67% in 4Q18, in line with 67.5% in 3Q18 and up from 61% in 4Q17. The profit margin expansion was attributed to continued manufacturing/operational efficiencies, alongside going direct in Europe. Management repeatedly emphasized the 2021 goal of 70%+ gross margins is “exactly” on track, especially with highly automated US manufacturing set to come online this quarter and ramp over the course of 2019.

4. Highly Automated US Manufacturing To Be Running “Shortly”

This was the first earnings call from Insulet’s new HQ – and highly automated manufacturing facility – in Acton, MA. Management said operations will be running “shortly,” with one US manufacturing line to provide “up to 50%” of the capacity of Insulet’s total China operation, but with up to 90% less headcount. A second US line is also being set up, meaning both US lines together will double current manufacturing capacity, help drive down costs, increase quality, and add redundancy. Ms. Petrovic called this out as “really important” and a “massive value driver,” following an analyst question: “Is there something we are missing?”

As discussed at JPM 2019, Wayde McMillan has been appointed Insulet’s new CFO starting this coming Friday. Mr. McMillan was briefly introduced on today’s call, though current CFO Mike Levitz shared financial prepared remarks and took Q&A. Mr. Levitz was extremely gracious in his remarks, thanking the team for Insulet’s tremendous progress over his four-year tenure as CFO. Mr. McMillan’s background is impressive: he most recently served as CFO of the Minimally Invasive Therapies Group at Medtronic, where he managed an $8 billion revenue business with greater than 20,000 employees and a global finance team. He played a critical role in integration efforts following Medtronic’s acquisition of Covidien in 2015, including reorganizing the Medtronic Group structure and developing a new global financial plan and strategy. We imagine Mr. McMillan may well be a very strong asset for the company, especially as it gains more global scale and manages direct operations OUS – we look forward to seeing his transition where he helps lead a dynamic, standalone diabetes business.

In line with JPM, Insulet expects to launch the new Bluetooth-enabled Dash PDM in US pharmacies by the end of 1Q19 (i.e., within the next month), offering Dash with no upfront cost. Insulet now has contracts for 120 million covered lives in the pharmacy, up from “over 100 million” as of last month. This represents “~1/3 of all Omnipod covered lives” in the US, meaning a very sizeable fraction of users may not have pharmacy access to Dash. Management was a vague about this, but said for the first time that “there will be some limitations in terms of reimbursement for Dash” – our interpretation was that those not under pharmacy contracts won’t be able to upgrade to Dash at launch. Management said “10%” of the business currently runs through the pharmacy, and the most it could be by the end of 2019 is ~30% (i.e., if every single person with coverage converted to Dash). We’re not sure if Insulet will allow people covered under DME to convert to Dash, or if they will have to wait until coverage is put in place.

2. Coverage for ~50% of Medicaid Lives, a “bigger opportunity” than Medicare; 1/3 of Medicare lives

Beyond Dash’s pending pharmacy launch, Insulet has expanded Medicaid access to ~50% of US covered lives and secured coverage for about one-third of all Medicare lives – both metrics rose from 3Q18, where Medicaid stood at 45% and Medicare stood at “almost one-third.” Ms. Petrovic emphasized that Medicaid is a “bigger opportunity” for Insulet, given the large pediatric population (a key Omnipod target market). Ahead of formal Medicare Part D coverage starting on January 1, 2019, Insulet has already helped “thousands of people” through the Medicare exception process – up from “over 1,000” as of 3Q18.

An international launch of Dash is expected in late 2019/early 2020, back from the previous expectation to launch in 2H19. Insulet is evaluating the right go-to-market strategy, and it’s “not clear” it will launch with the same similar pharmacy model OUS. Dash does have a CE Mark, though it has not been publicized. At ATTD last week, Dash was on display in a corner of Insulet’s booth, though it was not heavily marketed in the booth and the reps were not even aware it has been CE Marked. Given the US launch is only happening next month – eight months after FDA clearance – waiting on the OUS launch is not too surprising.

1. Horizon Launch on track for 2H20 with Samsung Galaxy Phone Control; “Gearing Up” for Pivotal in 2019; “Expect to take advantage” of ACE Pump pathway

In line with JPM and 3Q18, an Omnipod Horizon hybrid closed loop launch is expected in 2H20 with direct smartphone control on Samsung Galaxy phones. Insulet is “gearing” up for pivotals, which are expected this year as of last month’s presentation. As a reminder, this device received FDA breakthrough device designation. (Medtronic’s next-gen MiniMed 780G also just received this designation.) Said Ms. Petrovic, “We are incredibly excited about progress on Horizon.” We learned at JPM that the direct smartphone control for Horizon will initially be available only for Samsung Galaxy Android phones, with Apple iOS to follow; integrating with Tidepool Loop gives Insulet a faster path to getting hybrid closed loop for Omnipod on Apple iOS. We’re not sure if Horizon will launch with an optional Dash-like PDM controller for non-Galaxy users; that possibility was not mentioned in 3Q18, at JPM, or today. We imagine for pediatrics, having an optional PDM would make sense and would not be much work. 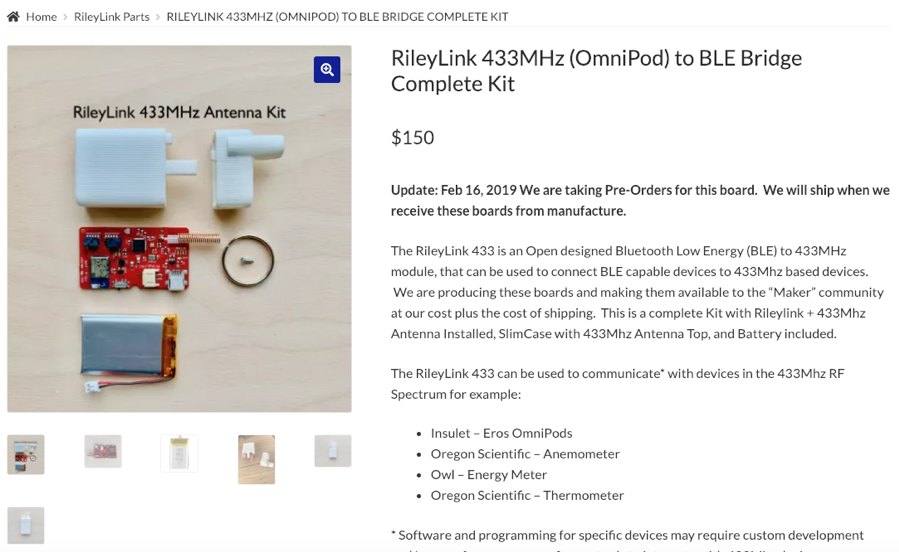 Continuing a trend we’ve come to expect, the Lilly-partnered U500 and U200 Omnipods were not mentioned. As of last month, the U500 had still not been submitted to FDA, with a launch now expected by the “end of 2019/early 2020” – a delay from the previous update to launch in “2019,” which had itself been a major delay. Fairly positive clinical trial data was shared at ADA 2018. This product has been tragically delayed since this partnership was announced in May 2013 – 2,121 days ago! One positive point of emphasis at JPM was that just under 15% of Insulet’s user base already has type 2 diabetes (and growing rapidly), meaning the current reservoir size will fill the needs of many users though there are also many who are likely changing pods more quickly or those who cannot go on the system because they use too much insulin for the product to be efficient for them. Last month, Ms. Petrovic called the Lilly-concentrated insulin Omnipods “attractive, but more as a supporting player than a feature player.” While we’re now not any longer holding our breath for this to come out any time soon, we’ll take “supporting player” – this project is going to be hugely helpful for more type 2 patients when it is ready. We do think understanding the delay in more detail would be useful.