Glooko announced pump and CGM integration partnerships today with Dexcom and Insulet, expanding its historic diabetes device focus on BGMs alone. The next generation Glooko platform (iPhone/Android apps and a web dashboard) will roll out this summer (this was fast!) and include access to data from both devices. Today’s news was not a major surprise, as the March news of Glooko’s $16.5 million in funding first announced CGM/pump integration plans (as a reminder, Medtronic was a first-time investor in the Series B round).

See the screenshots below for some of the new dashboards  – the interface looks terrific, with a colorful, unified layout prominently showing time in range (yes!), CGM modal day traces, insulin doses/pump data, BGM values, exercise, and logged carbs. OmniPod and Dexcom data will be downloaded to Glooko via a micro-to-micro USB OTG cable – patients will do this via their own Android phone (direct iPhone download is still in development), or clinicians can do this using a kiosk Glooko provides. Notably, Dexcom Share receiver users with iPhones will also be able to send their data straight to Glooko’s platform via Apple’s HealthKit – we’ve tried this for other apps like mySugr and found the Dexcom import to be low hassle (it just requires authorizing Dexcom Share to “write” glucose data to the Health app, and authorizing another app to “read” that data). This pump/CGM news adds to Glooko’s impressive device compatibility with 30+ BGMs, popular activity trackers, and blood pressure and weight measurement devices.

The added functionality will be available for both the consumer and clinic/health plan Glooko subscription models. As a reminder, the consumer version was soft-launched in March at a price of $59 per year. That seems like a pretty good deal for patients, though as another reminder, many patients are loathe to pay for anything (they haven’t been well trained). The clinic version, by contrast, negotiates contracts with payers/health systems, which give the Glooko system to patients for free.] A major emphasis of the announcement is Glooko’s risk-stratified population tracker, which enables providers to see all their patients in one web interface and pinpoint those in trouble – we increasingly believe diabetes care delivery needs to go in this direction, particularly as healthcare reimbursement changes to ACOs and more bundled payment models.

Glooko has a meaningful presence at ADA this week – in addition to its own booth, the company will have demos at the Insulet booth, which we assume will be quite busy with the expected debut of the new Bluetooth-enabled, touchscreen OmniPod PDM. It was notable to see today’s press release quote both Dexcom CEO Kevin Sayer and Insulet CEO Patrick Sullivan – both signal that data management is of critical importance at the highest levels of management.

Most of all, this is good news for patients and providers, as it will make downloading and unifying disparate data sources that much easier – it’s really starting to feel like the proprietary company data siloes, software, and cables are going by the wayside (as they should). These partnerships also set Glooko on the potential path to the more important step two (and focus of HCT’s Diabetes Data Innovation Initiative, announced on Monday): advanced decision support software that enables patients and clinicians to take meaningful action from the overwhelming data being generated. 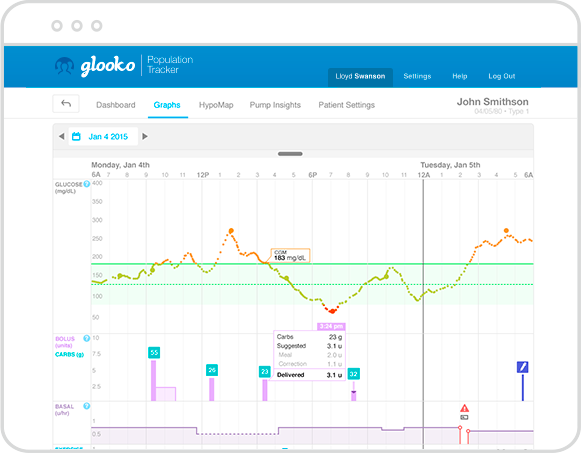