Insulet reported 4Q17 financial results today in a call led by CEO Patrick Sullivan, CFO Michael Levitz, and President Shacey Petrovic. It was another record quarter for sales, on the backdrop of four other major wins: securing a path to Medicare Part D coverage (early January), submitting the new Dash PDM to the FDA (early January), implementing a major plan to go direct in Europe starting on July 1, and breaking ground on the new highly automated US manufacturing plant (online in 2019). Highlights below! 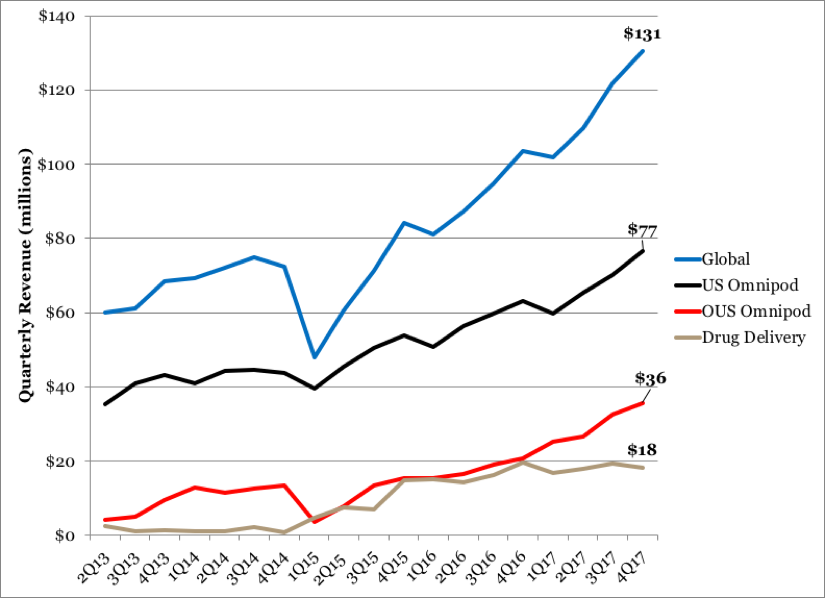 Management provided full-year 2018 and 1Q18 guidance, shown below. Generally these are in line with the current trends – continued momentum in US Omnipod, continued strong growth in the international business (though lower in 2018, given the focus on continuity of care, with the transition to direct distribution), and a decline in Drug Delivery. The Dash PDM and Medicare/Medicaid expansion aren’t expected to drive meaningful revenue until 2019. Management remains “very confident” in the 2021 targets of $1 billion in revenue, 70% gross margin, and above-market profitability.

In line with JPM, the Bluetooth-enabled Dash PDM and pod were submitted to the FDA “earlier this year,” with clearance expected in 2H18 followed by a “limited market release.” The slide (below) shown at JPM offered a nice graphic of the PDM, display app (user’s phone), and view app (caregiver phone). We like the iOS widget (lock screen), which showed insulin on board prominently and right under Dexcom’s G5 widget. Unlike the G5 transmitter (which can talk to a receiver and the smartphone app), the Dash pod will only talk to one device at launch – the Dash PDM. If a user’s own smartphone is not nearby, the app will display the most recently received data from the Dash PDM. Since the Dash PDM is a locked down Android phone, it will have WiFi, which presumably allows passive data upload to the cloud (Glooko!) and unlocks over-the-air software updates. Both will help Insulet stay competitive with Tandem’s t:slim X2 and Medtronic’s next-gen Bluetooth-enabled pumps. 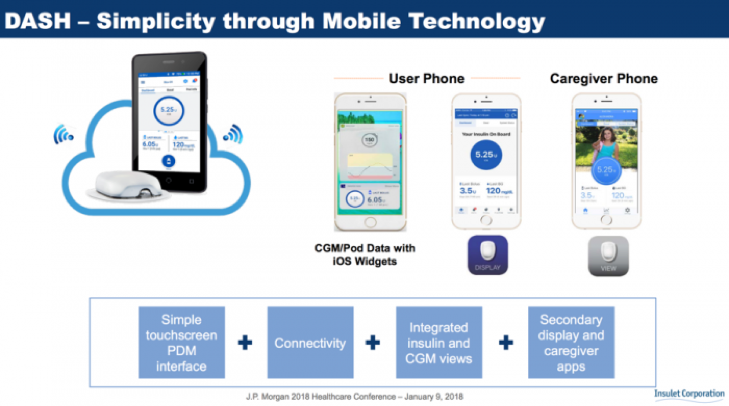 Insulet is in the third IDE trial (five-day hotel study) for the Horizon Automated Glucose Control system. Insulet is learning “a tremendous amount” in this current study in pediatrics down to age two years. Depending on the data, the company will either move to a pre-pivotal study later this year, or do another study before moving ahead. This will be determined in the next month or two. Still, it implies a 2018 pivotal trial is unlikely to happen, meaning a pivotal in 2019 and a launch with Dexcom G6 is indeed “probably 2020 timeframe” – this is in line with JPM remarks last month and on the later side of the 3Q17 plan for an “end of 2019” or “early 2020” launch.

The Lilly U500 and U200 Omnipods are “on track” with previous timing – a U500 launch in 2019, followed by a 2020 launch of the U200 Omnipod. We saw screenshots of the U500 user interface in November at DTM, which looked outstanding on Dash. The phase 3 study of the Lilly U500 Omnipod PDM in type 2 patients (VIVID; n=416, change in A1c at 26 weeks) has completed, and at AADE, Dr. Trang Ly hoped it would be presented at ADA 2018 in Orlando. The later U200 product will be the big one for increasing Insulet’s addressable market, though President Shacey Petrovic emphasized that U500 is one of Lilly’s fastest growing molecules - hearing that 13% of Insulet pumpers are already type 2 bodes well for the opportunities here.