Medtronic reported 3Q17 (F2Q18) financial results this morning in a call led by CEO Omar Ishrak. Diabetes is page 12 in the presentation slides. Mr. Ishrak noted that diabetes is in a “difficult” phase due to the CGM sensor supply constraints. The pressure is certainly on to get this resolved quickly and scale the MiniMed 670G launch, along with the company’s US launch of Guardian Connect (standalone mobile CGM). Read our highlights on the financial and pipeline fronts below. 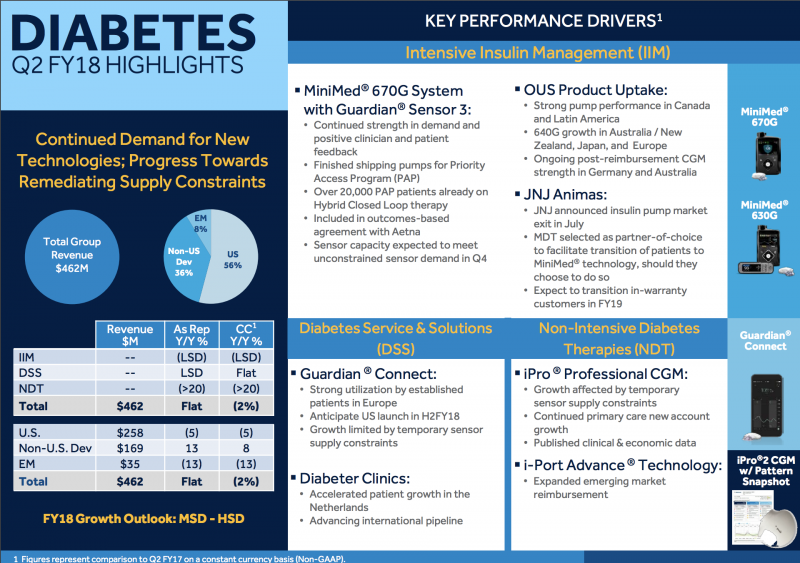 1. Global Sales Down 2% YOY Operationally, Flat as Reported; 5% Decline in US vs. 7% Growth Internationally

Worldwide Medtronic Diabetes sales of $462 million decreased 2% YOY operationally and were flat as reported. Sales grew 3% sequentially on an easy comparison to low sales in 2Q17. The YOY comparison was also fairly easy (3% growth in 3Q16). As the chart below indicates, the business has been relatively flat over the past few years – we saw almost identical sales of $460 million in 1Q14! For the second straight quarter, the international business provided 100% of Medtronic’s quarterly growth – a trend we’ve now seen in five out of the past seven quarters. Rewinding to a year ago, fresh off the 670G FDA approval in the US, we would not have believed Medtronic would see this level of US sluggishness. Management blamed the constrained sensor manufacturing for the slow sales, and we’ll have to see if things actually pick up in the coming two quarters. 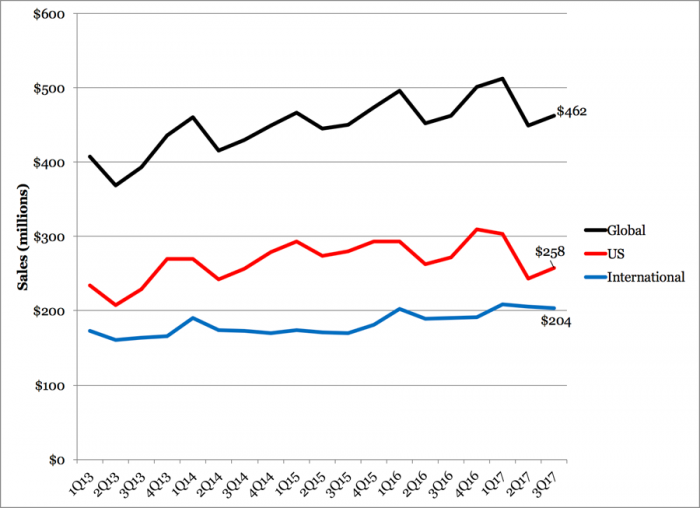 In a jump in optimism, Diabetes growth is expected to “significantly” improve in the coming two quarters, driving “mid-to-high single digit growth” for all of FY18 (May 2017-April 2018) – this is a notable rise from the +1%-4% guidance given in 2Q17, which was an unprecedented downtick from the earlier +10%-12% ambitions. The sensor manufacturing constraints have obviously capped previous expectations for the full year. For context, sales declined 1% operationally in F1Q18 and declined 2% operationally in F2Q18 (this quarter), so the second half of this fiscal year will need roughly ~10% YOY growth to get the full-year to mid-single-digit growth.

Medtronic has finally finished shipping pumps for the 670G Priority Access Program (sensors still constrained), and over 20,000 US patients are now on Hybrid Closed Loop – more than doubling the “about 10,000” update we last heard at DTM 2017. The Priority Access Program included “close to 35,000” patients (per 2Q17), implying ~15,000 still don’t have Guardian 3 sensors/transmitters (i.e., they have a pump but are not on hybrid closed loop, since sensors have not full shipped).

5. CGM Capacity Constraints to Be Resolved by February-April 2018

CGM sensor capacity remains constrained, but is still expected to resolve in February-April 2018 (F4Q18) – in Q&A, Diabetes President Hooman Hakami said the expansion plans are running a bit ahead of schedule, encouraging considering the unexpected Puerto Rico storm challenges. In line with 2Q17, the press release noted “strong global demand” for sensors outpacing supply. The press release implied things are improving on the sensor manufacturing front (“as evidenced by the improved sequential revenue growth”), though this is hard to unpack – US revenue was very low in 2Q17, which made the sequential comparison quite easy anyways.

6. US Launch of Guardian Connect Mobile CGM + Sugar.IQ by April 2018

The long-awaited Guardian Connect standalone mobile CGM and paired Sugar.IQ app with IBM Watson are still expected to launch in the US by April 2018 (2H FY18), in line with the 2Q17 update, but delayed from the prior May-October launch plan (JPM 2017). We assume Guardian Connect is still under FDA review, but this was not specifically addressed today. The slide deck noted Guardian Connect’s “strong utilization by established patients in Europe” – as a reminder, the version outside the US uses the prior-gen Enlite Enhanced sensor.

In the first update since January, Medtronic is “preparing” for the international launch of the MiniMed later in FY18 – i.e., by April 2018. This is delayed from the plans to launch by May-October, per the company’s JPM 2017 slides in January. Management did not comment today on which countries will launch first. As of the September 2016 FDA approval, we only knew that international regulatory “approval” was expected in “summer 2017” – it’s not clear if any countries have received approval at this time. The constrained sensor manufacturing has presumably gated an OUS launch. On the plus side, we assume learning from the US rollout will heavily inform OUS plans – perhaps things will ramp more quickly outside the US, assuming reimbursement is there.

Medtronic’s next-gen iPro3 professional CGM is expected to launch in FY19 (May 2018-April 2019). This is the same timing as was shared in 2Q17, which itself was an ~1 year delay from prior plans. Today’s update did not specify whether this would be a US, international or global launch – the 2Q17 update only positioned this as an international launch. However, with strong US competition from Abbott’s FreeStyle Libre Pro, the pressure is on to launch stateside as soon as possible. Per the 2016 Analyst Day, this sensor will be “single-use,” blinded, and have an expected MARD of ~11% - key updates given the current high-hassle, reusable form factor in iPro2.

Q: How are you feeling about the reacceleration in diabetes? How confident are you? What gives that confidence that next year you will grow in the double digits?

Hooman Hakami: Let's start with the back half of this year and then we can talk about FY19. I'd say the acceleration that we expect in the back half of the year is really driven by three things. The first one is our that sensor capacity plans are actually not only going according to plan, but are slightly ahead of schedule. We anticipate that we're going to be in a position by the end of this fiscal year where our sensor capacity will allow us to meet all of the demand. As we get that backup we expect to see acceleration, not only of sensor revenue but also of pump revenue.

The second one is the 670G and the real-world performance of 670G as more of those systems get into the market. This is a system that now has 13,000 patients that are uploading their data into CareLink. What's really encouraging is that what we’re seeing even at these volumes that outcomes and performance are very similar to what we saw in the pivotal trial for the FDA. And so as those things really start to continue to take hold, I think both from a physician perspective and a patient perspective we'll start to see traction.

And then the third dynamic for the back half of the year, which will also go into FY19 is Animas and the transition of those patients to Medtronic. And then as we look forward into FY19, there's a series of new product launches in addition to all of these dynamics. Guardian Connect and our entry into the standalone sensor market is number one. iPro 3, which will be a new professional CGM for our type 2 business is number two. You combine all of these things and we feel good about the acceleration into the second half and also double digits for FY19.

Q: So you'll have full sensor supply as of the fiscal fourth quarter?

Mr. Hakami: That's right. So we're going to ramp up and Q3 should be better than Q2. So our capacity expansion plans will allow us to produce more sensors this quarter than we did last quarter, and then by Q4 we'll be in a position where we can meet all of the demand.