EASD 2018 (European Association for the Study of Diabetes)

Hello from Berlin, where our team is writing from what was one of the more intriguing data days at what continues to be one of the more intriguing data EASDs. Today, we saw Lilly’s GLP-1/GIP dual agonist, SGLT-2 inhibitor in type 1 results from Lilly/BI, not to mention DPP-4 Tradjenta’s CVOT. See our highlights from day #3 (EXSCEL Post Hoc, new LEADER subgroup analysis), day #2 (HARMONY CVOT), and day #1 (KOLs on SGLTs for type 1). One day left at this year’s excellent meeting!

In a very highly anticipated phase 2 readout, Dr. Juan Frias revealed highly impressive glycemic and weight loss results for Lilly’s LY3298176 (“LY”), a once-weekly GIP/GLP-1 dual agonist  (see Lilly’s press release and a publication in The Lancet). In this phase 2b, 26-week dose-ranging study (n=316), four doses of LY (1 mg, 5 mg, 10 mg, and 15 mg) were examined in comparison to both Trulicity (dulaglutide) 1.5 mg and placebo – we’ve tabulated all of the efficacy and safety results below. In addition to those prespecified endpoints, two additional, exceptional results were also presented: Weight loss ≥15% and percent achieving A1c <5.7%. On the former weight loss endpoint, 22% of those on LY 10 mg and 25% of those on LY 15 mg achieved at least 15% weight loss, which was significant vs. both placebo and Trulicity. Additionally, 6% of those on LY 5 mg achieved this weight loss, but this result was not significant. Moreover, 18% of those on LY 10 mg and 30% on LY 15 mg achieved an A1c <5.7%, both significant against placebo and Trulicity. For comparison, 2% of the placebo group, 2% of the Trulicity group, and 4% of the 5 mg group achieved this result. Of note, these are on-treatment analyses, excluding efficacy data after study drug was discontinued or rescue therapy was initiatied, if this occurred (the statistical principle Novo Nordisk has utilized in presenting phase 3 data for oral semaglutide). Still, both of these results reflect truly remarkable levels of efficacy, particularly at higher doses; the room truly came alive when Dr. Frias revealed the weight loss data in particular. To this end, we hope very much that Lilly will pursue LY for obesity and NAFLD indications too, as there’s no doubt in our minds that more efficacious pharmacotherapies that are accessible are desperately needed in these areas – so far, Novo Nordisk has really grown this industry from scratch with Saxenda. During Lilly’s 2Q18 update, management announced that LY would advance to phase 3 for type 2 by early 2019 – the first-ever dual agonist to make it to phase 3. Lilly also alluded to impressive efficacy, specifically by announcing that an investor call would take place following Dr. Frias’ presentation, and we have to admit: These results did not disappoint. 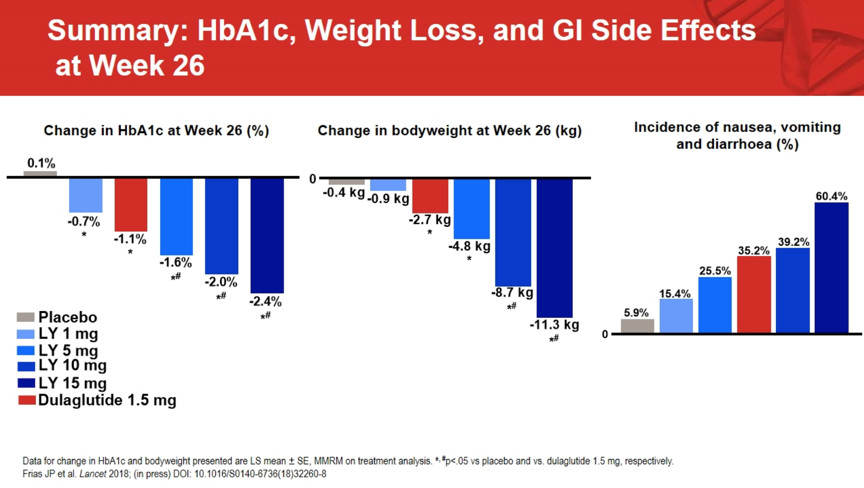 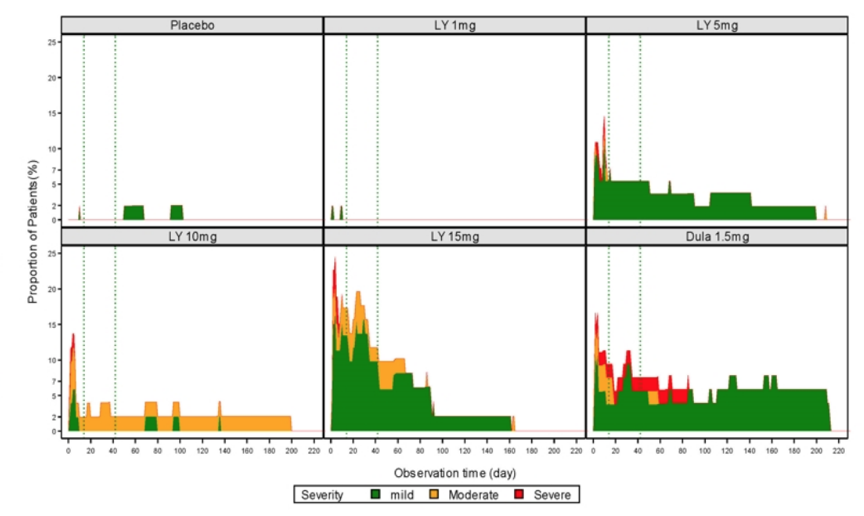 Results from the phase 3 EASE program for Lilly/BI’s Jardiance in type 1 diabetes – comprised of EASE-2 (n=730) and EASE-3 (n=977) – identified significant A1c, time-in-range, and weight loss benefits with three doses of empagliflozin (2.5 mg, 10 mg, 25 mg) – see the full paper, just published in Diabetes Care, and watch the webcast here. However, results also indicate a consistent dose-response relationship, in line with two other phase 3 programs of SGLTs in type 1 (AZ’s DEPICT program and Lexicon/Sanofi’s inTandem program). Following announcement of very topline results at ADA 2018 (i.e. no numbers), all eyes were on the 2.5 mg empagliflozin dose investigated in 241 EASE-3 participants only: According to Dr. Julio Rosenstock’s ADA presentation, this dose gave significant improvements on A1c and body weight with no increased risk of DKA – we’ve taken a deep dive into EASE safety data in the highlight below this. Dr. Rosenstock returned to the stage at EASD to present a truly enormous amount of data from both EASE trials, which we’ve summarized in the table below. At a high level, these results are consistent with other phase 3 trials of SGLTs in type 1. Across all three SGLT-in-type 1 programs, higher doses seem to offer considerably higher efficacy, but at the apparent cost of greater DKA risk – more on this one highlight below. 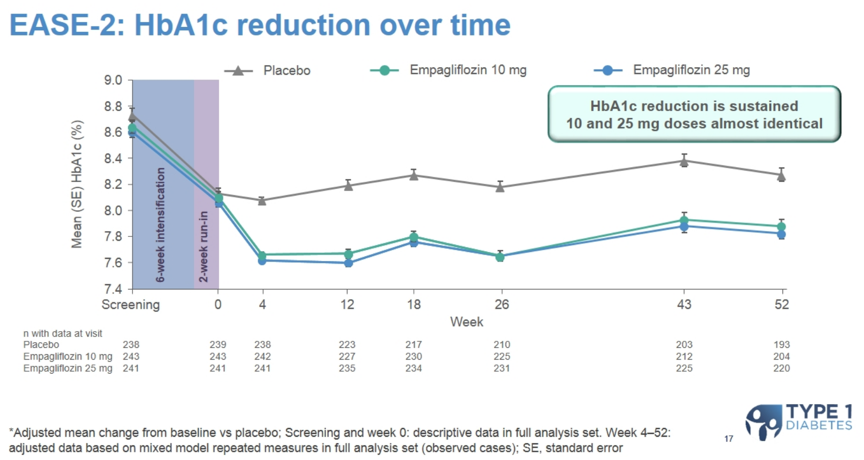 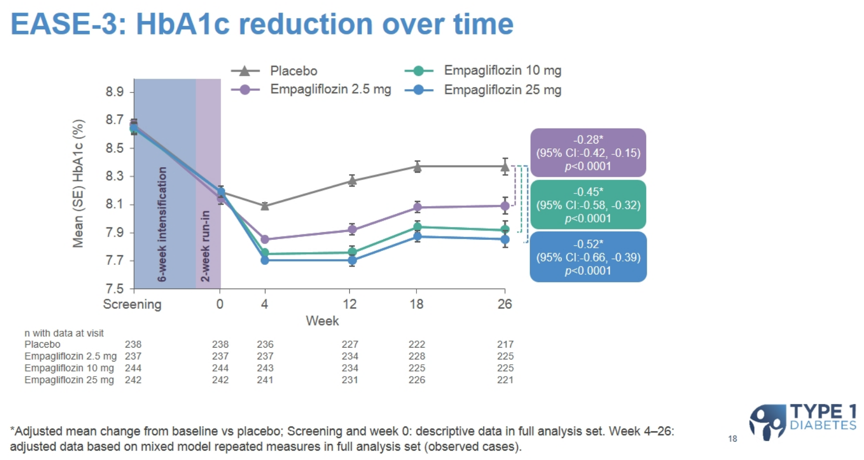 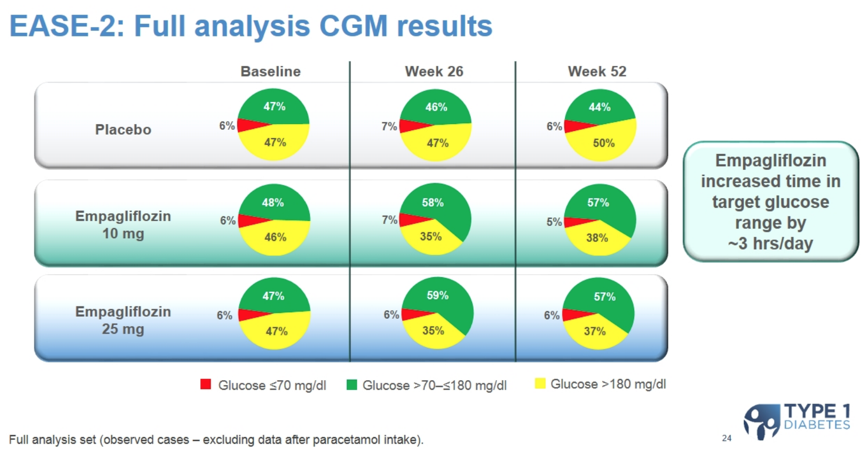 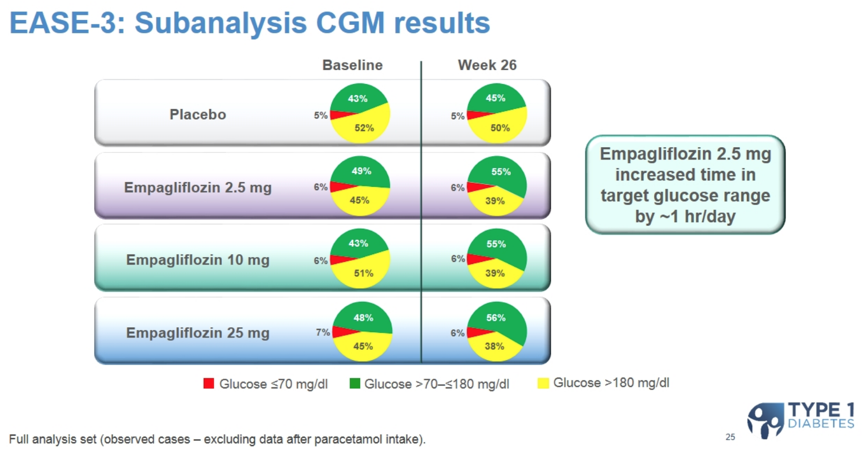 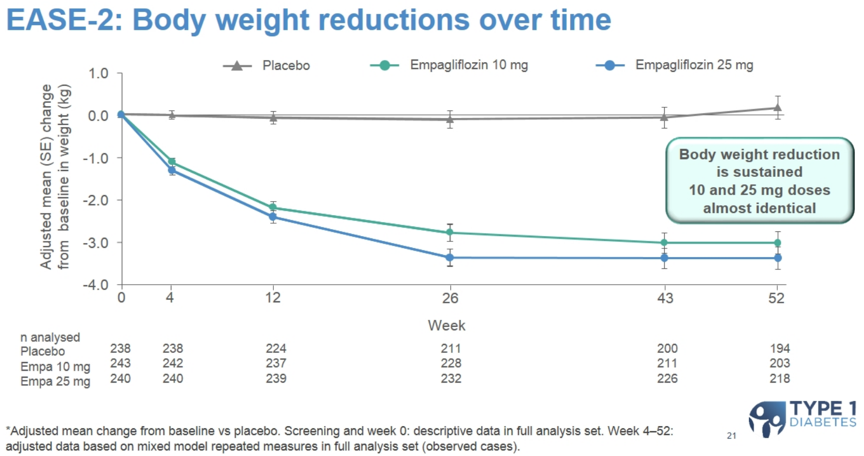 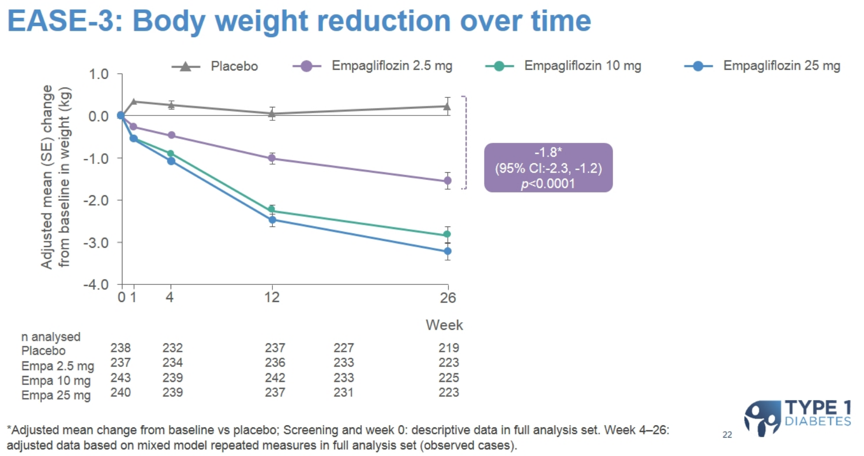 Dr. Bruce Perkins presented much-anticipated safety data for the EASE-2 and EASE-3 studies, highlighting the absence of increased DKA risk with the 2.5 mg dose of empagliflozin. In EASE-3 over 26 weeks, there were two certain DKA events among 241 participants randomized to 2.5 mg (1.2%), compared to three certain events in the placebo group (0.8%). Dr. Perkins provided a thorough analysis of data pertaining to general safety, adverse events, and DKA. Methodology wise, data sets for 10 mg and 25 mg empagliflozin treatment groups were pooled separately across the two studies to generate a larger data pool; placebo groups were also pooled. Separately, the 2.5 mg empagliflozin arm from EASE-3 was compared to the placebo group from EASE-3 only. Broadly speaking, there was a dose-dependent response in DKA risk inasmuch as DKA risk was increased with both the 10 mg and 25 mg doses, but not with the 2.5 mg dose; however, there were actually more confirmed DKA events in the 10 mg group (21 events; 4.3%) than the 25 mg group (18 events; 3.3%), though both were meaningfully higher than placebo (6 events; 1.2%). The higher doses were also generally associated with elevated rates of other adverse events, including genital infections, volume depletion, and DKA. This dose-response relationship for risk is generally in line with what has been observed in other trials of SGLTs in type 1. 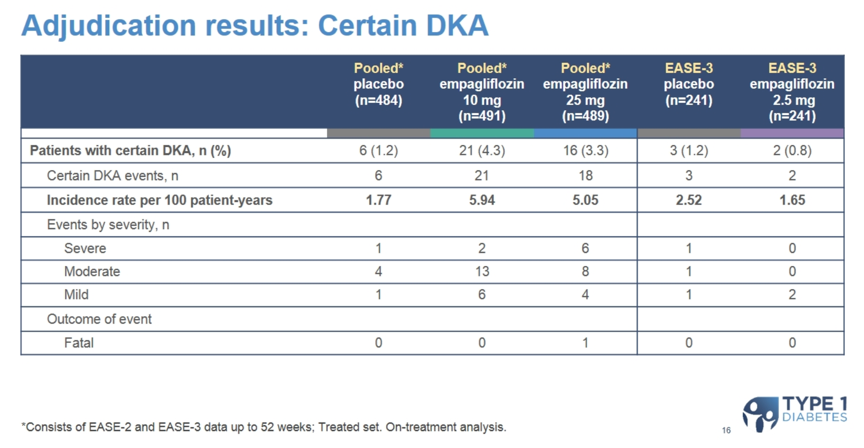 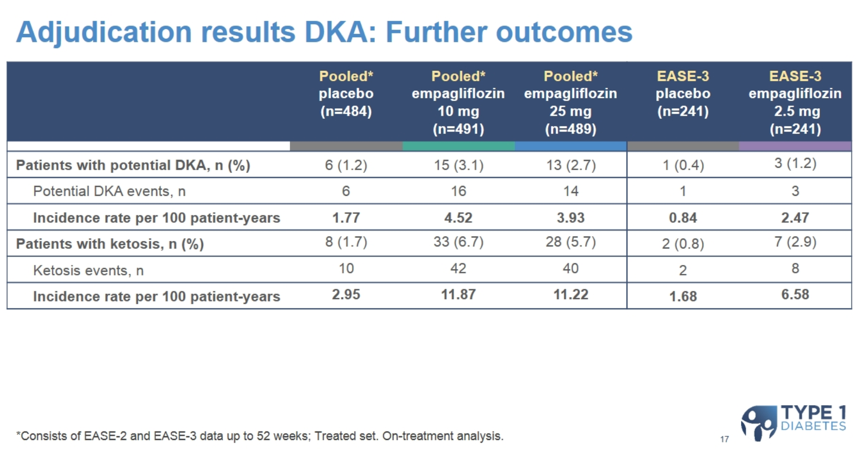 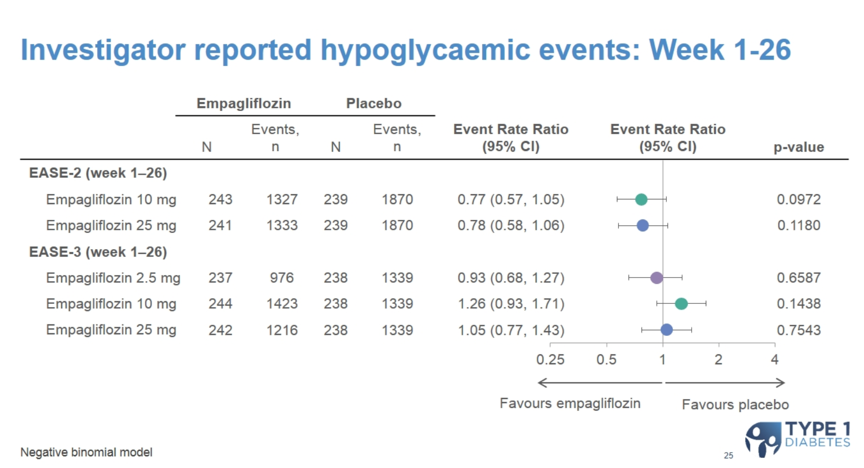 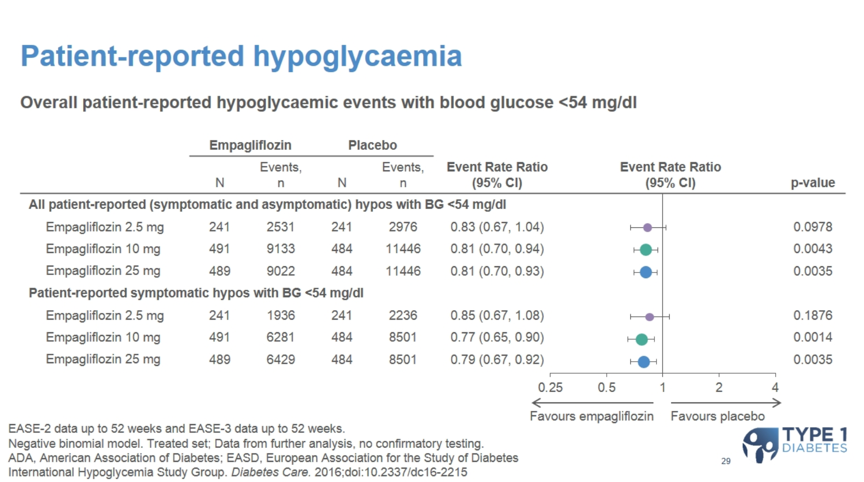 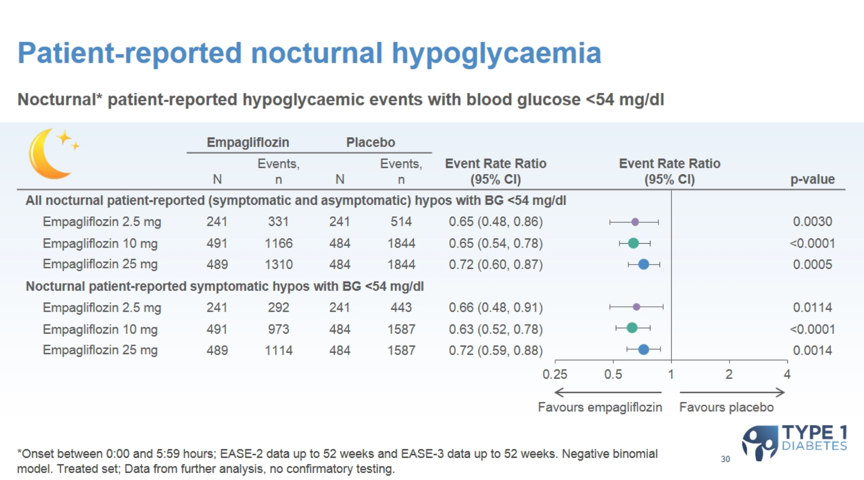 In a riveting oral presentation, MedImmune’s Dr. Victoria Parker provided tremendously positive phase 2a efficacy results for AZ/MedImmune’s GLP-1/glucagon dual receptor agonist MEDI0382, including an exciting first-look at emerging time-in-range data. The 49-day study (n=65) randomized participants into two cohorts, each pitting MEDI-382 vs. placebo. In cohort one, FreeStyle Libre Pro was worn across the entire trial and participants were titrated more quickly; in cohort two, there was no Libre use and participants were titrated more slowly – see below. All participants had type 2 diabetes and an A1c ≥6.5% and ≤8.5; the primary and secondary outcomes presented only considered cohort one.

On the first co-primary endpoint, MEDI0382 demonstrated a significant (p=0.02) weight loss of 3.4 kg (~7.4 lbs) over the 49-day trial, compared to 0.1 kg with placebo (below). Dr. Parker was quick to point out that this weight loss began immediately and did not plateau after 50 days. However, weight did jump back up immediately following removal of therapy, which she attributed to the study’s short duration and the fact that no diet or lifestyle interventions were recommended to patients after the study. 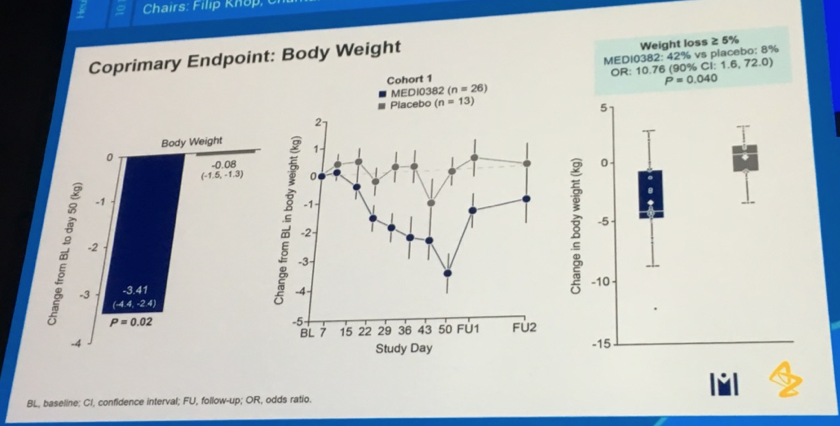 On the second co-primary endpoint of percent change from baseline to end-of-study glucose area-under-curve (AUC) in the first four hours after a mixed-meal tolerance test (MMTT), 300 μg (the highest dose) of MEDI0382 demonstrated a significant (p<0.001) 22% reduction. This was compared to a 6% increase in the placebo group. Notably, a pooled analysis of both cohorts on this endpoint at the lowest dose (50 μg), after the 7-day titration (see above), exhibited an equally significant 29% reduction compared to a 2% drop with placebo. To our understanding, this means that an ~equal percent reduction in hyperglycemia was found with 50 μg and 300 μg of MEDI0382 compared to placebo, suggesting this particular effect may not be dose-dependent. This postulation is supported by the steady difference in the mean daily glucose levels throughout the trial, seen in the CGM figure below. 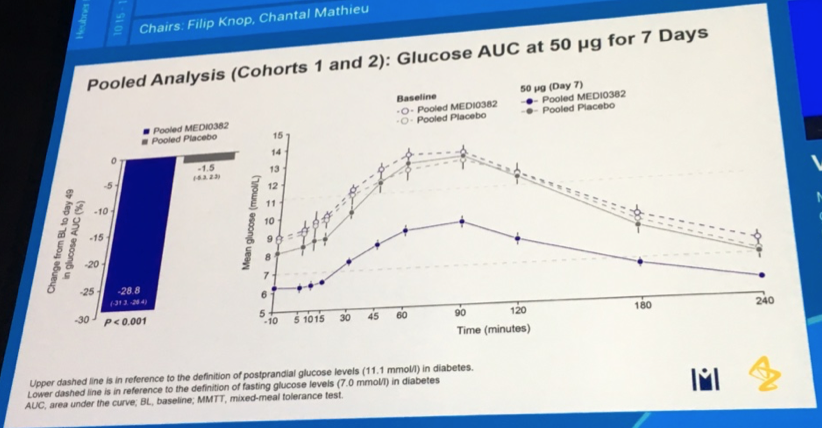 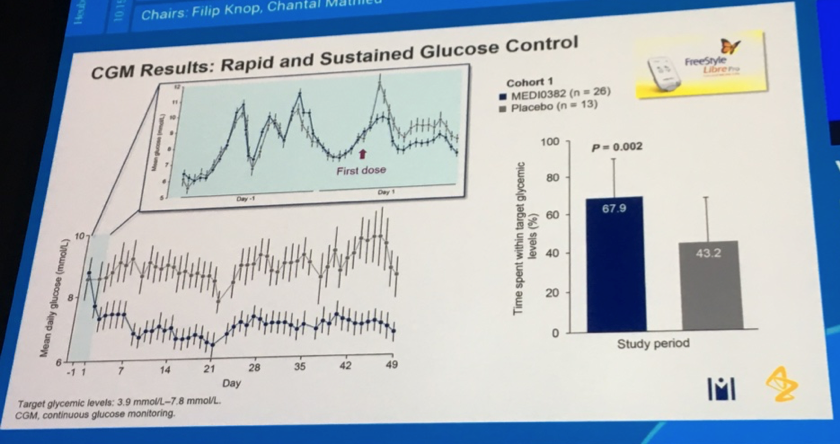 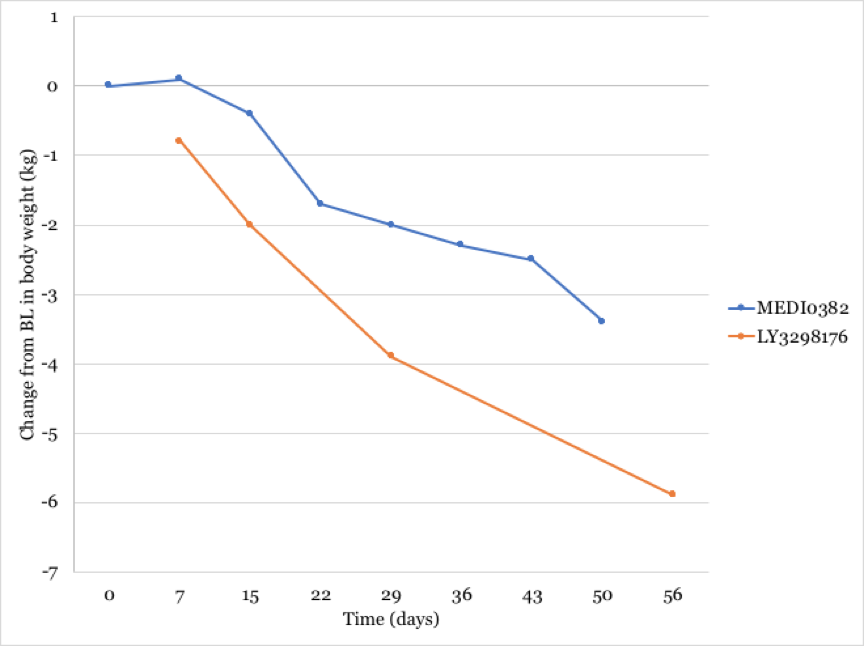 Ahead of publication, results from the CARMELINA CVOT for Lilly/BI’s DPP-4 inhibitor Tradjenta (linagliptin), which completed in January 2018, were presented (see the announcement). As expected, results on cardiovascular outcomes were neutral, but there was indication of benefit on albuminuria in this very high-risk population. Now, we’re eager for outcomes from the CAROLINA CVOT, which puts Tradjenta up against SU glimepiride – but first, get a rundown of CARMELINA results below!

And then, Prof. Home discussed what could have been better about the study:

At an evening LifeScan symposium, Head of Portfolio Strategy Mr. David DeJonghe shared that the new OneTouch Verio Reflect is not only under review for CE Mark, but has also been submitted to the FDA and Health Canada. The Verio Reflect, which we saw up close at the LifeScan booth, includes the Blood Sugar Mentor, a feature that pushes real-time insight and encouragement both to the meter and the OneTouch Reveal app. This meter will be branded as “Ultra Plus Reflect” in certain markets. We learned that Blood Sugar Mentor has a library of 30-40 messages, and that patients testing once or twice a day might receive two messages per week. Mr. DeJonghe stressed that LifeScan wants to avoid inundating patients with too much information, while still prompting them to consider their glycemic patterns. He acknowledged that a lot of the guidance is “germane enough to encourage behavior while not directly telling the patient what to do.” To this end, he noted that LifeScan has had “to walk a line” in developing the Blood Sugar Mentor so as not to stray too far into therapeutic territory, which would warrant more intense regulatory scrutiny. We’re not sure if/when it’s on the roadmap, but it would be great to see integration of more robust decision support in the future. 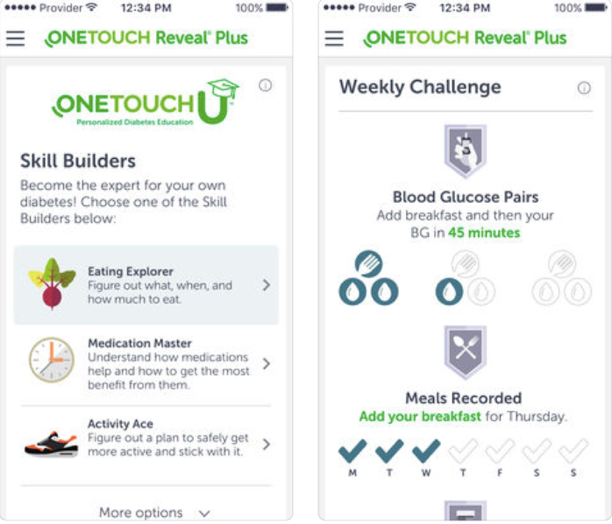 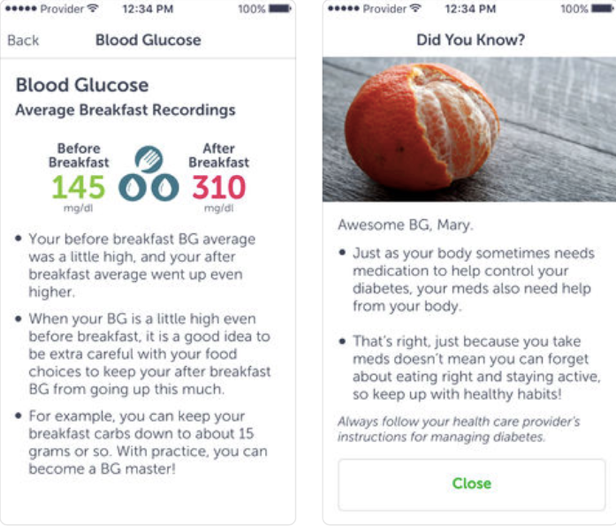 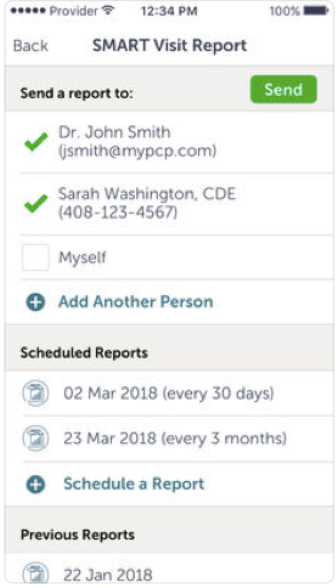 Last night, in the historic Wasserwerk Berlin building, the diaTribe Foundation hosted the 5th Annual Solvable Problems in Diabetes, putting together a panel featuring Portsmouth Hospital NHS Trust’s Dr. Partha Kar, Katholieke Universiteit Leuven’s Dr. Chantal Mathieu, and diaTribe Senior Editor Mr. Adam Brown. Below, we’ve provided a number of quotable quotes from a panel that one attendee said made her feel like a “voyeur,” listening in on a private conversation. Topics spanned the gamut of relevant diabetes and EASD topics, from CGM, SGLT-2 inhibitors in type 1 diabetes, type 2 diabetes care paradigms, type 1 cures, and more! Without further ado, our favorite quotes from the night:

On SGLT-2 inhibitors in type 1 diabetes

On CGM adoption and value proposition

On a type 2 diabetes treatment considerations

On type 1 prevention and cure

On the importance of celebrity advocacy and the patient voice