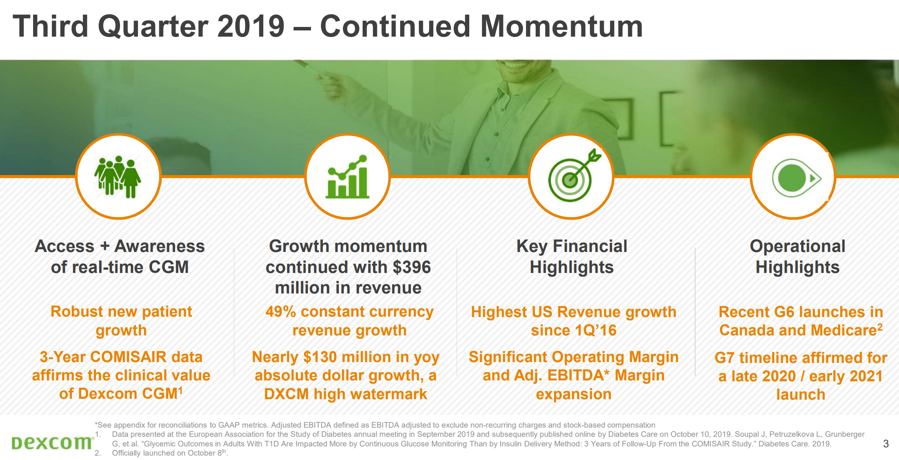 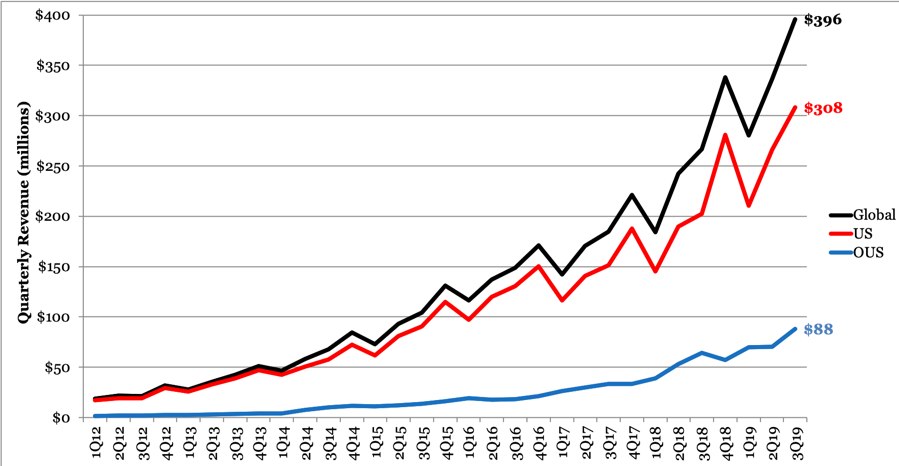 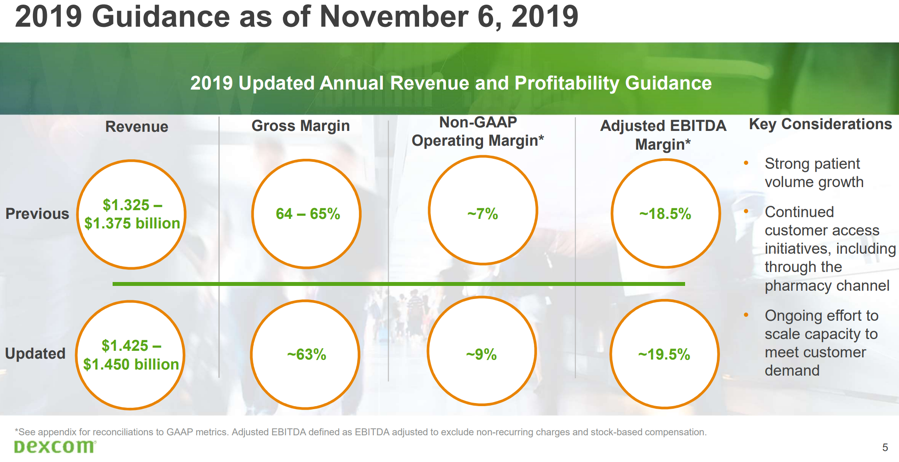 3. Net Income of $60 Million, First Profitable Quarter on both GAAP and Non-GAAP Basis; $1.4 Billion in Cash 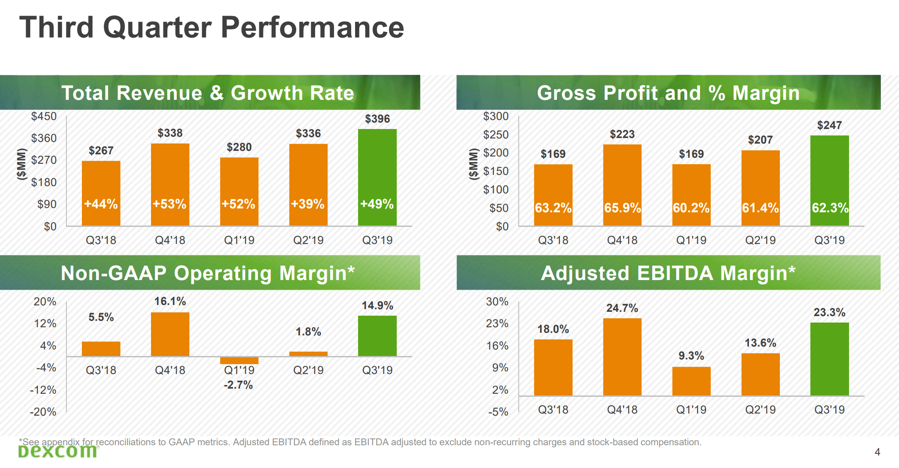 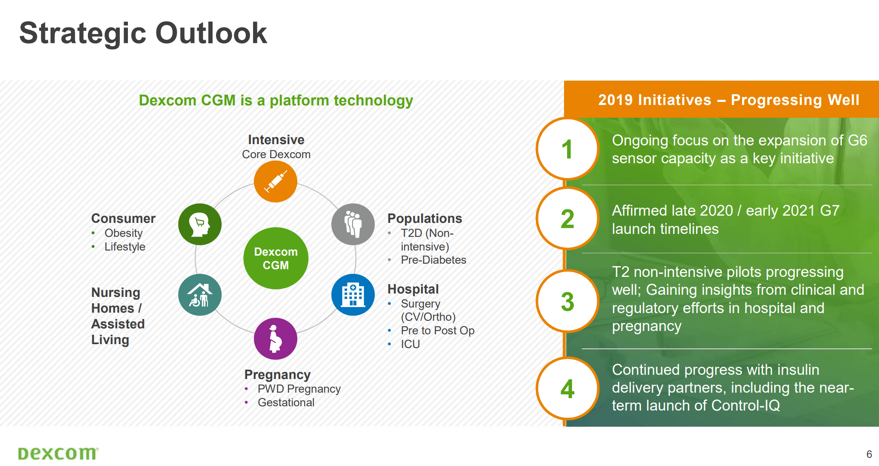 During prepared remarks, CEO Kevin Sayer shared that shipments of G6 to Medicare patients began in “early October” – on par with August expectations to launch in 4Q19 and about one year after G6 secured Medicare coverage. Importantly, Walgreens announced this morning that it will make G6 available to all Medicare patients at any retail location – a significant convenience win for the administrative-prone Medicare CGM channel. Walgreens is calling it “a new billing solution” for CGM, as it appears to bring the G6 from Medicare Part B DME into the pharmacy channel – offering simpler prescribing for HCPs (like a drug), faster processing, in-person fill, and convenient in-person pickup for patients. We’re not sure what the behind-the-scenes coding is here, but kudos to Walgreen’s for pioneering this! Walgreens is now the largest retail pharmacy chain providing nationwide distribution for Dexcom CGM. The press release notes that Walgreen’s is also working with other CGM manufactures to incorporate their product into the new Medicare billing model – for now that would only be Abbott’s FreeStyle Libre, as Senseonics and Medtronic do not have Medicare reimbursement. This is Dexcom’s second major collaboration with Walgreens this year, after G6 was also featured in the “Find Care” section of Walgreens’ app and website. On Dexcom’s August call, Mr. Sayer hinted that more collaboration between the two companies was coming, and making G6 available at Walgreens’ nearly 10,000 retail locations throughout the US will be a major access win for patients and healthcare providers. With the increasing pharmacy availability, the company expects Medicare G6 adoption to really “take off” next year.

2. Manufacturing Capacity for G6 Will Have “Doubled” by the End of 2019, and Double Again by “Middle of 2020”; Issues on One Line Reduce Inventory

Dexcom is on track to double its manufacturing capacity this year and plans to add more automated production lines “in the first quarter, more in the second quarter” that will again double G6 production by the “middle of 2020.” At the same time, G7 manufacturing is already being planned! A manufacturing line for G6 went down in September, temporarily reducing production. The reduced manufacturing capacity (and strong demand for G6) left inventory levels “tight’ entering 4Q19, and CFO Quentin Blackford noted that the G5 to G6 transition in certain channels of the business would be “slower than originally anticipated.” Abbott went through similar manufacturing capacity challenges with FreeStyle Libre, and, overall, this is a good “problem” to have. Still, Dexcom has been chasing G6 demand for over a year now, and it shows just how much manufacturing capacity and scale this market will take.

Early in the call, Mr. Sayer expressed enthusiasm for the “great response” to launch of Dexcom G6 in Canada (September 2019). This was previously constrained by manufacturing capacity, but the launch came in line with expectations following Health Canada approval in February. Dexcom’s FAQ page notes that “most private insurers” cover Dexcom for type 1 diabetes, but we aren’t sure how coverage looks for type 2 insulin users. In September, Abbott received public reimbursement for FreeStyle Libre in Canada’s two largest provinces, including for insulin using type 2s in Ontario.

1. Dexcom G7 is “On Schedule” for Late 2020 Limited Launch, Broader 2021 Rollout; “Final Tweaks” to Design and Algorithm and App Work To Do;

Dexcom and Verily’s work on G7 is continuing full speed ahead, with a limited launch still expected in late 2020 and broader rollout in 2021. This timing is in line with what we’ve heard for the past ten months (2Q19, 1Q19, ATTD, 4Q18, JPM, and December’s Investor Day). On the 2Q19 call, we heard the groups were “making some very big decisions over the next couple months.” In today’s update, it seems those “big decisions” were made as Dexcom and Verily are now evaluating the “final tweaks” before locking down the entire design. Work will continue on the app and algorithm development, but “none of that will slow down the clinical study.” Getting the hardware done is easily the biggest piece of this product – great to see it getting close to ready a year before launch. 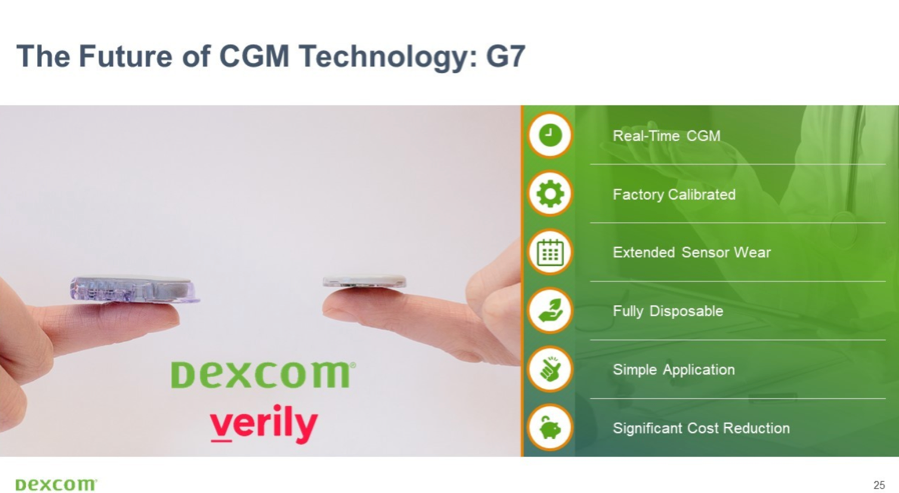 During prepared remarks, EVP Steve Pacelli made brief reference to the Dexcom G6 Pro, which received FDA clearance in October, following submission in early July. Dexcom continues to benefit from the 510(k) iCGM pathway it opened up with G6. Notably, the professional CGM is indicated for all people (i.e., non-diabetes) in unblinded mode, and all people with diabetes in its real-time mode – that was new to us today. The system will launch in “early” 2020 using the same G6 sensor platform (10-day wear, factory-calibrated, auto-applicator), but moving to a fully disposable Bluetooth transmitter, offering both real-time and blinded modes, and giving users the option of the receiver or G6 app for viewing data. The new transmitter will automatically start the sensor when clicked into place, eliminating the need to scan a code or hit “start.” Making the device fully disposable also eliminates the HCP burden of having to keep track of and clean transmitters, while also preparing Dexcom for the manufacturing of its fully disposable G7. 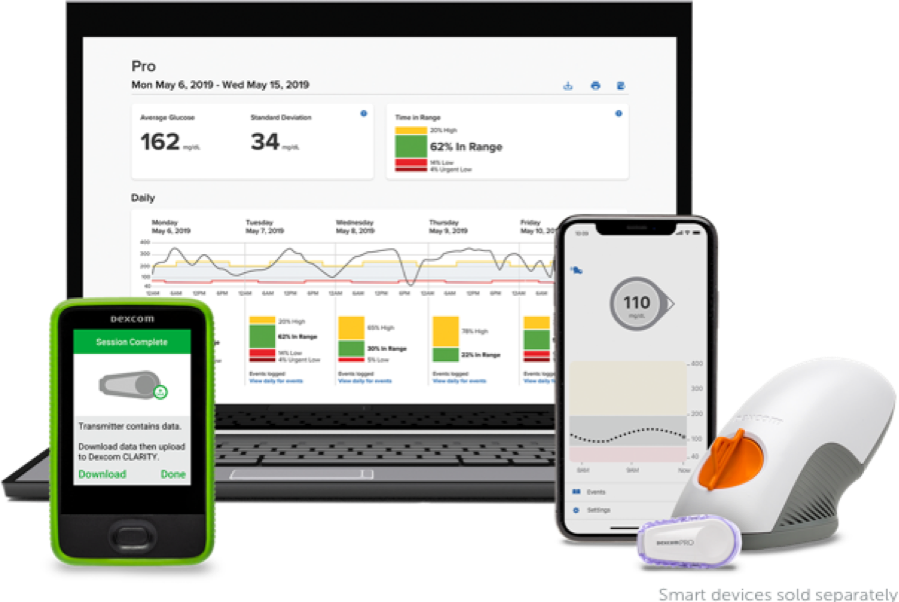 Management mentioned a few key insulin delivery partnerships. Quotes and the latest timing are listed below.