Zealand held its 2021 “R&D Day” on a virtual platform on Thursday, with Live Q&A with management on Friday (we expanded this report). See the video presentations and slide decks here; we loved the live Q&A that happened early this morning – see later in the report.

Zealand currently boasts 12 drug candidates across metabolic and GI/inflammation therapeutic areas. All of these therapies are being developed through Zealand’s innovative peptide discovery platform, which utilizes computational chemistry and other technologies to enhance stability, bioavailability, and modify characteristics of a candidate to improve safety and efficacy. Head of Discovery and Innovation Dr. Rie Schultz Hansen cited Zealand’s dasiglucagon as a prime example of this technology at work: by swapping out seven of 29 amino acids in glucagon’s native sequence, the company created a novel candidate that increases blood sugar (glucagon’s normal function) without aggregating in solution (a common problem associated with glucagon use). This platform has also been used to design peptide candidates with dual pharmacology, like Zealand’s GLP-1/GLP-2 dual agonist dapiglutide being explored in short bowel syndrome. 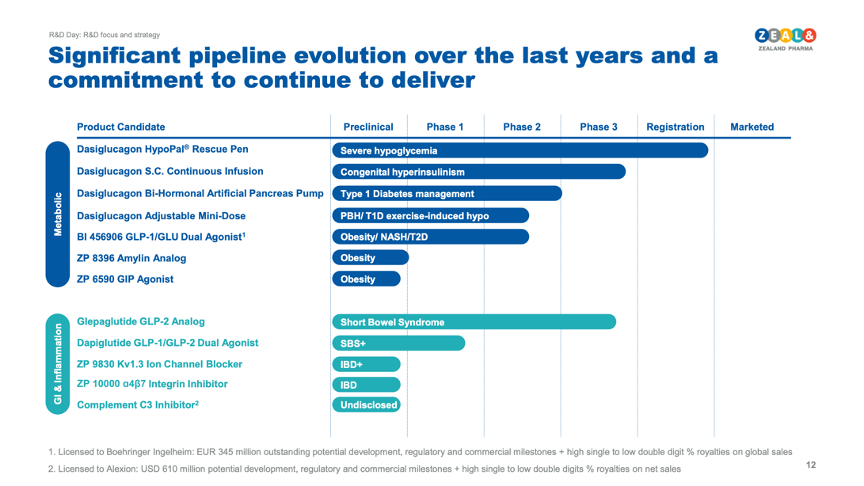 Following positive pre-pivotal results that were first announced in June 2019 and presented at FFL 2020 last July and a “very productive” end of phase 2 meeting with the FDA, the twelve-month pivotal trial for the bi-hormonal iLet system with dasiglucagon is set to begin in 2H21. This is slightly behind schedule based on the timeline offered at FFL 2020 that slated the pivotal for “early 2021” with a launch “in 2022, maybe early 2023.” As a reminder, the trial is considerably longer than insulin pump pivotals have generally been in the past (six months for Control-IQ and three months for MiniMed 780G), primarily because Zealand’s liquid-stable glucagon analog dasiglucagon has never been used long-term with type 1s.

Based on today’s presentation, the trial will investigate three interventions – bihormonal iLet with Dasiglucagon (BHBP), insulin-only iLet (IOBP), and “usual care” – in both pediatric (n~350) and adult (n~350) populations with type 1 diabetes. The primary endpoint will measure the superiority of A1c reduction with BHBP vs. IOBP at 26 weeks, and key secondary endpoints will investigate long-term safety/efficacy over 52 weeks and non-inferiority for time in hypoglycemia.

Members of our team (Kelly) have used the iLet pump in a trial before and spoke very encouragingly about its size and ease of use, key positives not only for people with diabetes but also increasingly for HCPs who are very short on time and who also need easier to train devices given that most training is done remotely currently and presumably in the future. 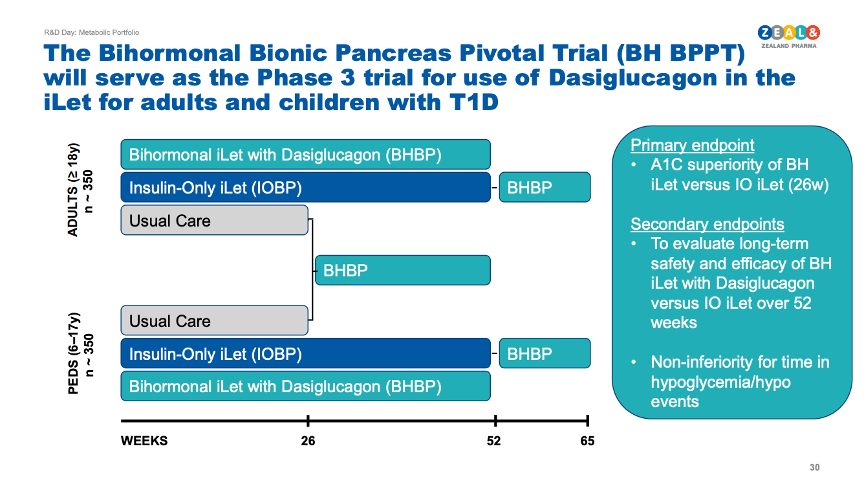 As announced in Zealand’s 3Q20 update, the dasiglucagon HypoPal rescue pen is aiming for a potential commercial launch in the US following its March 27th FDA PDUFA date. Zealand today announced it is planning for the HypoPal’s successful launch, which includes a focus on expanding US capabilities – as a reminder, Zealand hired Mr. Frank Sanders as the President of Zealand Pharma US in June 2020, launched headquarters in Boston in July 2020, and created a new Global Medical Affairs division in September 2020 with Drs. Danilo Verge and David Kendall at the helm.

Elsewhere in the company’s dasiglucagon program, Zealand today gave an update on its phase 2 and 3 trials exploring the therapy in various hypoglycemia indications. Firstly, Zealand has an extensive phase 3 program for dasiglucagon in congenital hyperinsulinism (CHI): one of these trials has completed with positive results, another set to complete in 2H21, and an open-label extension study which is still recruiting. The company also has plans to complete “mini-dose” trials in post-bariatric surgery (phase 2b outpatient study to begin 1H21) and in exercise-induced hypoglycemia in type 1 (also planned for 1H21). Exercise-induced hypoglycemia is a very big deal and something that hasn’t yet been “cracked” in the closed loop – from our view, the second opportunity is far bigger than the first, but both are critical. 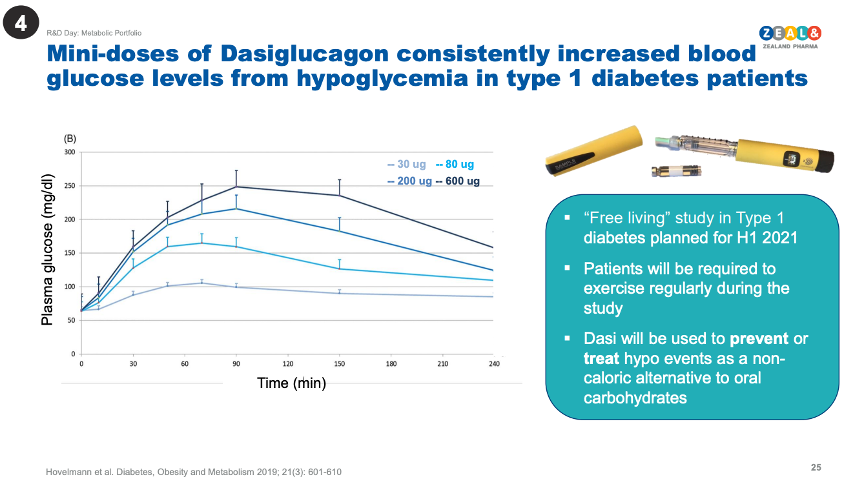 Select updates were given on Zealand/BI’s dual GLP/glucagon agonist BI456906. The companies are currently pursuing three phase 2 trials: (i) one currently recruiting in type 2 diabetes, set to complete in 3Q21 (n=350); (ii) one not yet recruiting in obesity, set to complete in 3Q22 (n=350); and (iii) one not yet recruiting in NASH, set to complete 1Q23 (n=240). On the basis of positive preclinical results, Zealand is also anticipating the start of phase 1 obesity trial in 2021 for its amylin analog (ZP8396) alone and in combination with other peptides (e.g., GLP-1, GIP), akin to Novo Nordisk’s semaglutide/amylin combination in obesity and Lilly’s dual agonist for T2D. The company is also pursuing IND enabling toxicology studies for its GIP agonist (ZP6590), which also allows for potential co-administration with other peptides. 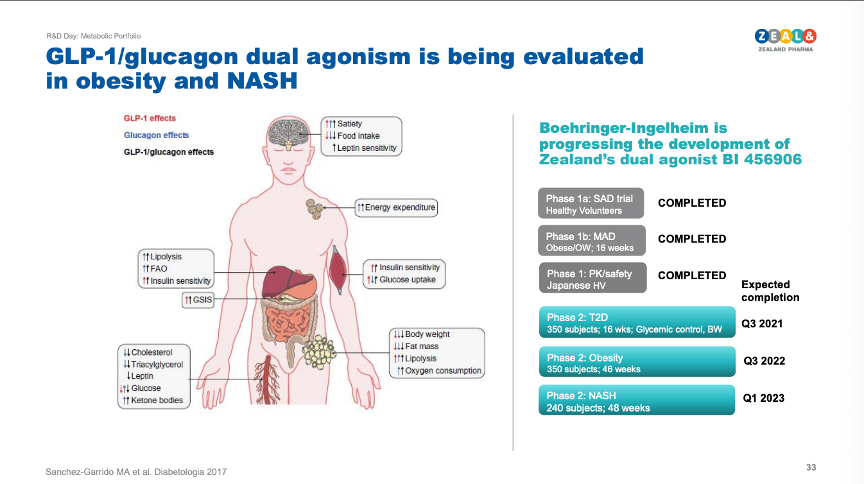 Zealand today held a follow-up Live Q&A session on its R&D presentation with investors – see here for an audio replay of the entire conversation. Zealand’s Dr. Emmanuel Dulac, Dr. Adam Steensberg, Dr. Danilo Verge, and Dr. Rie Schultz Hansen were all on the call to give more insight into their presentations released yesterday.

There’s much more to take in regarding management Q&A – it’ll be up for a “for more days,” management said.