Greetings from the Bethesda North Marriott and DTM 2019! Today was a pre-conference day before the main show starts tomorrow – see our highlights below and read our preview here.

1. Novo Nordisk’s Connected NovoPen 6 and Echo Plus to Launch in 2Q20, Removable Pen Attachment in 2021; Decision Support in Pipeline

In a brief update on Novo Nordisk’s connected pen strategy, we learned that the already CE-Marked NovoPen 6 and NovoPen Echo Plus pens will launch in 2Q20, presumably starting in Europe where they already have regulatory approval. The timing is in line with the “2020” timeline given in Novo Nordisk’s most recent update, and about a year back from the “early 2019” goal given when the devices were first announced – it’s important to get the product and manufacturing right here, so we appreciate the cautious approach. As expected, the reusable NovoPen 6 and Echo Plus will display the last insulin dose and time on their ends, have an 800-dose memory, and five-year battery life. Data from the pens can be downloaded with NFC and the pens are compatible with any Novo Nordisk insulin cartridges, human and analog. The NovoPen 6 will allow adjustments down to 1 U with a maximum 60 U dose, while the pediatrics-targeted Echo Plus will allow adjustments down to 0.5 U with a maximum 30 U dose. We also got a look at the reusable pen attachment designed for Novo Nordisk’s disposable pens. That device is now targeted for launch in 2021, and while behind the initially anticipated launch, we’re happy to see decisions against rushing this to market and we’re glad Novo Nordisk is taking the time that it needs to get to market. It appears Novo Nordisk will launch its own app for that product, whereas the NFC pens will be more focus on in-clinic download. Presumably there is much more complexity with the Bluetooth-enabled add-on attachment. There’s so much room for fantatic apps we hope it is investing in this area and taking the time required to get this right. The first insulin pen was launched in 1985 – we’ve had over 30 years of pens that are not connected and we believe the broad diabetes ecosystem prefers organizations to take the time needed to make sure this is the best possible development and launch rather than rushing it. We also appreciate that this is a new arena and that timelines are challenging to make since there is much ‘unknown’ that can emerge. 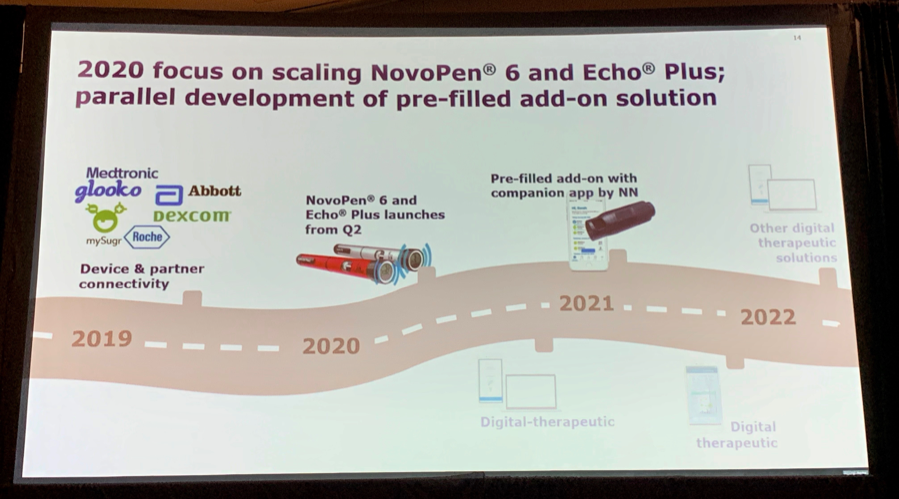 Dexcom’s Mr. Peter Simpson kicked off DTM 2019 with a few updates on G6:Mr. Simpson shared some initial field data (n=~2,500) showing a 43% relative improvement in 10-day patch survival rates using a new patch. At Keystone, Dexcom EVP Andy Balo shared that Dexcom had filed a new adhesive with the FDA. Based on the graph shown, the new patch, which has apparently already launched, shows a 10-day survival rate of ~95%, compared to ~90% with the original patch. 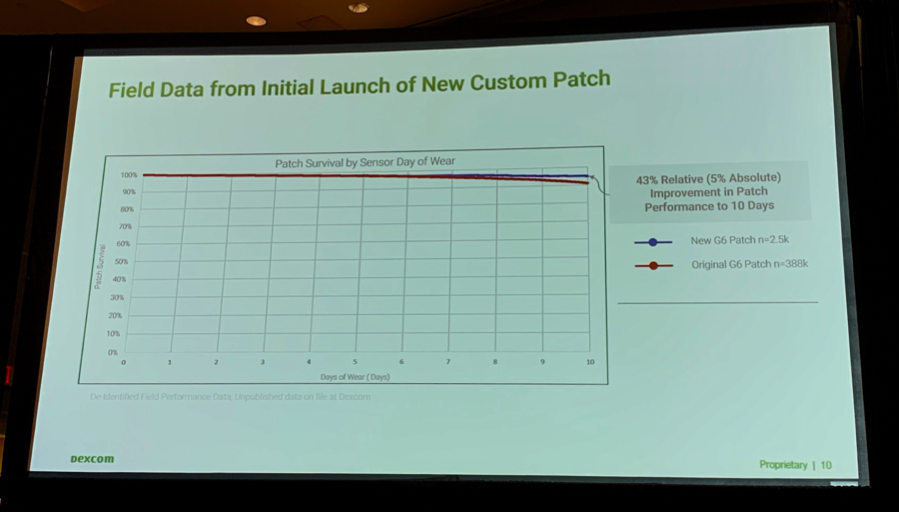 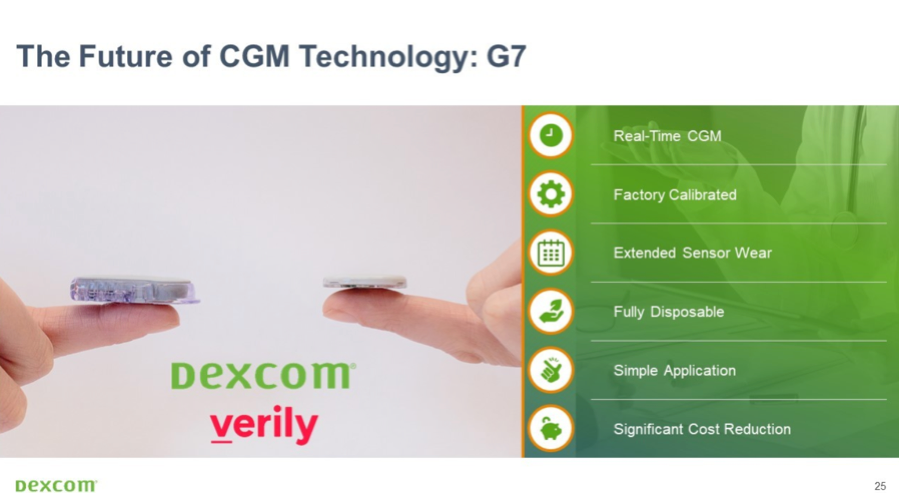 Increasing wear-time was a major theme throughout Thursday morning’s CGM session, and Medtronic’s Dr. Robert Mucic shared data from the patch design selection process for Medtronic’s next-gen CGM with studies out to 14-days. The studies were done with multiple adhesives and four different adhesive patch sizes, using a “representative payload” with the same size and profile as the planned CGM. Medtronic gathered user input during an internal study on level of skin discomfort, adhesive “edge lift,” appearance acceptability, and “device awareness during wear,” on eight combinations of adhesive and patch size. While skin discomfort, appearance acceptability, and device awareness during wear were all similar, there was significant differentiation in edge lift. Following patch removal, there were also significant differences in the level of adhesive residue and clean-up required. This helped Medtronic choose three materials for an external study with 28 people in a “Northern State” (mid- to high- 70s temperature, upper 80s humidity) and 31 people in a “Southern State” (high-80s to low-90s temperature, low 90s humidity). The hotter, more-humid weather showed one material clearly performed worse than the others over the 14-day wear period. Finally, a larger, multi-site study (n=310) helped differentiate the final two chosen adhesives; the 14-day survival rate for the best-performing adhesive appeared to be around 85%. Great to see Medtronic thinking so deliberately about adhesive! 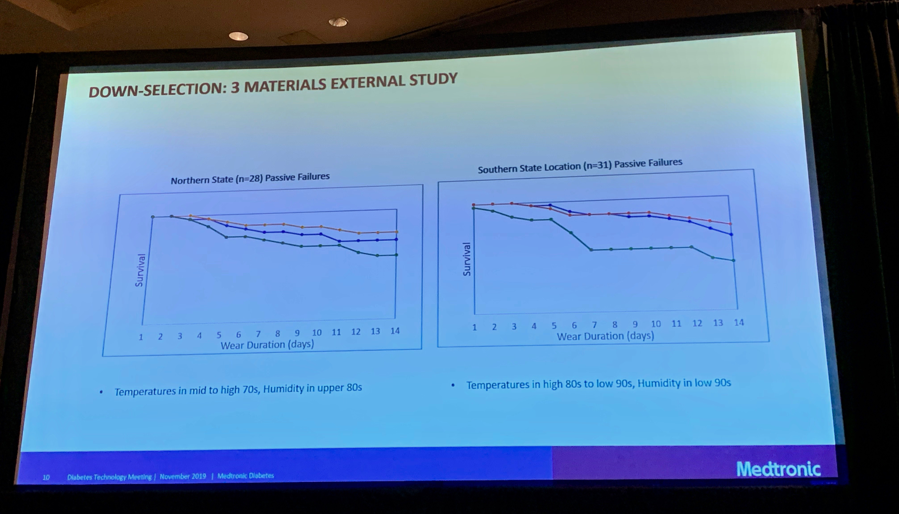 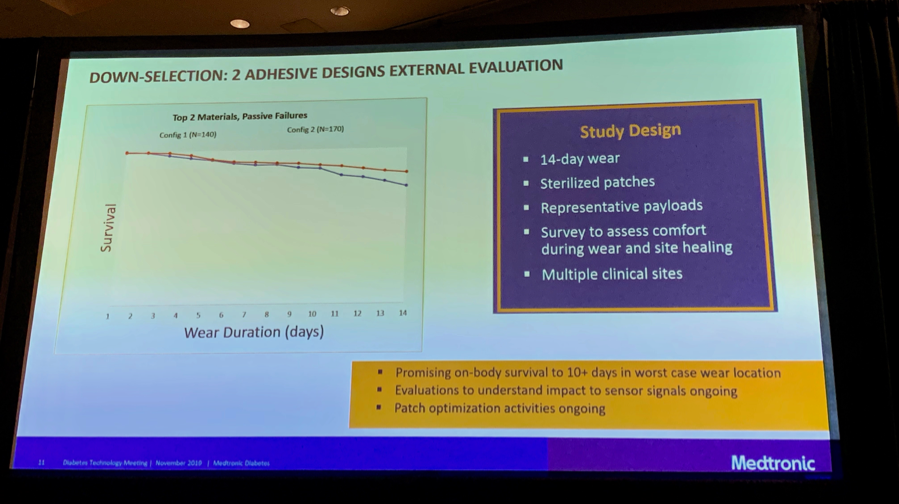 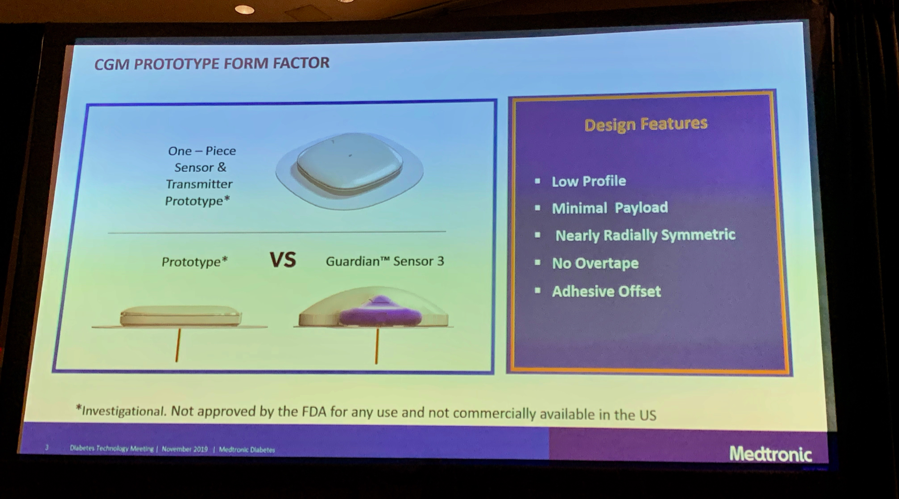 4. “About Half” of Eversense Sensors Removed at 180-Days Would Support 365-Days of Performance; Real-World Data from Europe Shows ~64% TIR, ~12% MARD vs. BGM Reference

Senseonics’ Mr. Alex Ghesquiere shared a quick look ahead at Senseonics’ plans for the implantable Eversense CGM, noting that “current R&D clinical tests” are already ongoing with Eversense up to 365-day wear. Additionally, he shared that “~50%” of current Eversense XL sensors that are removed at 180-days could actually support 365-days of wear. Currently, Eversense is approved for 180-days in Europe and 90-days in the US; enrollment for the 180-day US PROMISE trial just completed, with study completion expected in 1Q20 and launch of the 180-day sensor by “the end of 2020.” Extending sensor wear out to a full-year will require some chemistry and hardware modifications, primarily to prevent oxidation from degrading its glucose indicator monomer, TFM. Currently, the Eversense sensor has a dexamethasone coating, an anti-inflammatory steroid, to reduce oxidative species around the sensor. Mr. Ghesquiere shared that Senseonics is also considering providing alternate oxidation sites, among other methods, to further limit degradation of the TFM. Lastly, Mr. Ghesquiere presented a new sensor design, which will begin “clinical testing” starting this month. The new sensor will maintain the same size, but pack significantly more inside. The new design includes two integrated chips with four excitation LEDs each, compared to a single excitation LED in the current sensor. The improved sensor will include two hydrogels with indicator chemistry (rather than one). According to Mr. Ghesquiere, the new sensor design will enable a reduction in calibrations (Eversense currently requires two fingersticks/day), longer sensor life, and improved system accuracy. 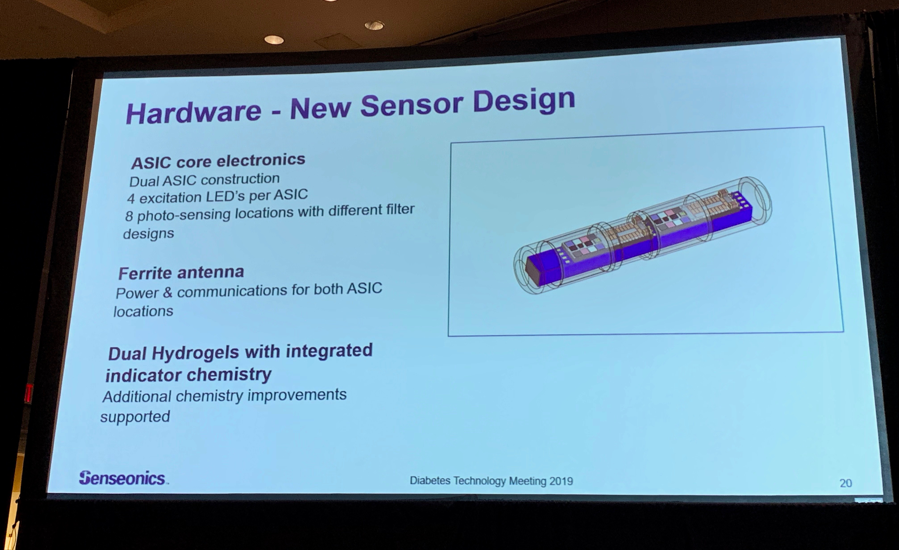 We first heard about DailyDose at ADA 2018 as a decision support app co-developed by University of Toronto’s Dr. Joe Cafazzo and funded by Helmsley Charitable Trust. Recommendations are specifically programmed to prioritize improving time-in-range (TIR) and reduce hypoglycemia, in conjunction with a post-prandial hyperglycemia prevention algorithm (ALPHA). In terms of quality, a healthcare provider first sets the “range” of insulin settings that the recommendation engine can toggle between (i.e., “if my patients starts at a ratio of 1 U/10g carbs, recommendations can only go up to 1 U/5g carbs”), and “expert opinions” are used to prune out potentially erroneous recommendations. We’re curious to see how in-depth these “expert opinions” are and to what extent they regulate recommendations. Of note, the app’s final quality control measure is that patients have the option to accept or decline all recommendations, which Dr. Castle highlighted as an important safety feature. 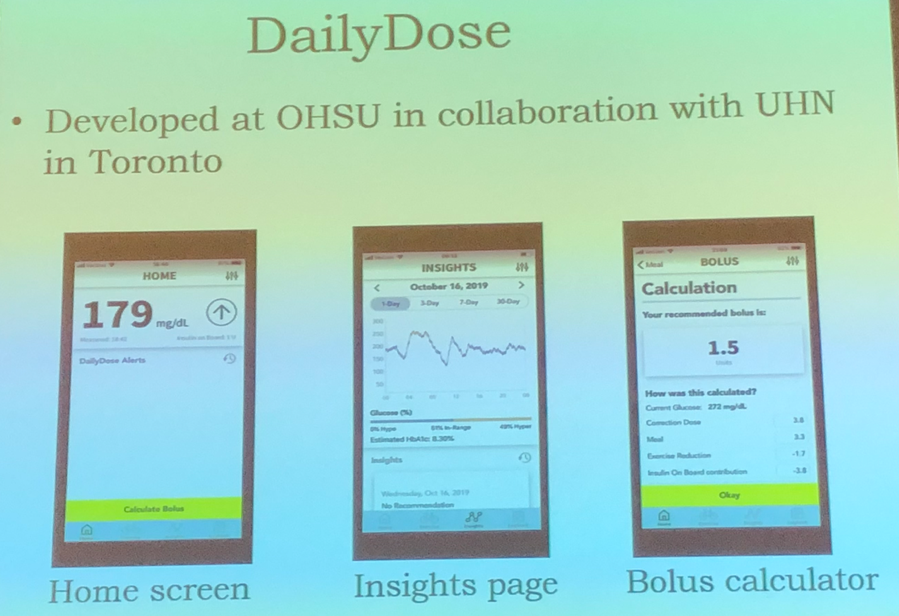 6. Sansum’s Dr. David Kerr: Smart Pens Have the Biggest Potential to Improve Outcomes (Outside of CGMs), But May Affect Clinician/Patient Dynamics

Sansum Diabetes’ Dr. David Kerr presented an optimistic overview of where he thinks smart pens will best fit into the current diabetes ecosystem, calling the device a “potential technology that [he] think[s] will be disruptive.” Other than with CGM, Dr. Kerr believes that insulin pens specifically have the most potential to improve outcomes by addressing insulin omission, which he categorized as (i) not giving any insulin or (ii) giving a dose of insulin that is not necessarily safe in amount or timing. Indeed, a study from March found that 36% of basal doses and 24% of fast-acting doses were missed or forgotten by people with diabetes. He noted that for clinicians in particular, not knowing how much insulin a patient has been taking makes it difficult to have meaningful dialogues about treatment, and this problem is especially prevalent in patients using MDI instead of pump therapy. Uniquely, smart pens can now allow patients and practitioners to “get a sense” of insulin omission. 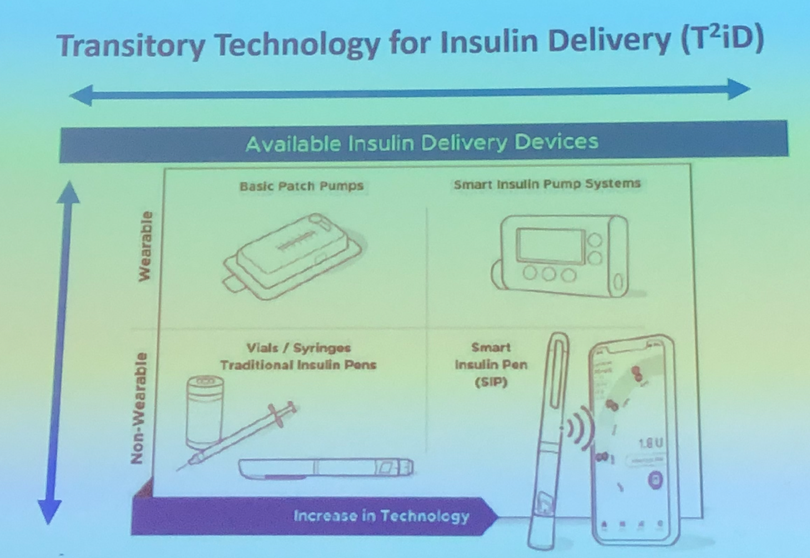 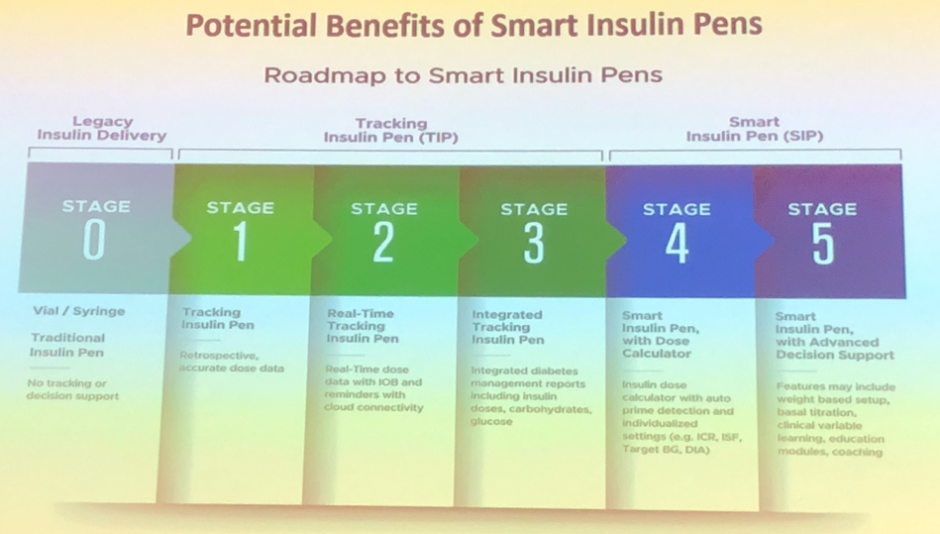