Based on financial results from the nearly 30 public companies that we regularly track, this diabetes/obesity industry roundup provides a bird’s eye view of trends in the first half of 2018, including a deep dive into each major drug class and device category.

This report is divided into four sections: (i) overall industry performance; (ii) diabetes therapy; (iii) diabetes technology; and (iv) obesity. Within each section, we analyze sales performance, share of growth, and provide graphs with current and historical trends. Please note that in many cases, the data we’ve used for our analysis reflects our best estimates, since a number of companies don’t disclose financial information in great detail (or in the case of BI, at all, except once a year). We’ve made the basis of our assumptions clear in the text below, and we recognize that a number of the estimates may be meaningfully different from the “actual” that is not known! If you have opinions on how an estimate could be improved, please don’t hesitate to reach out and let us know. 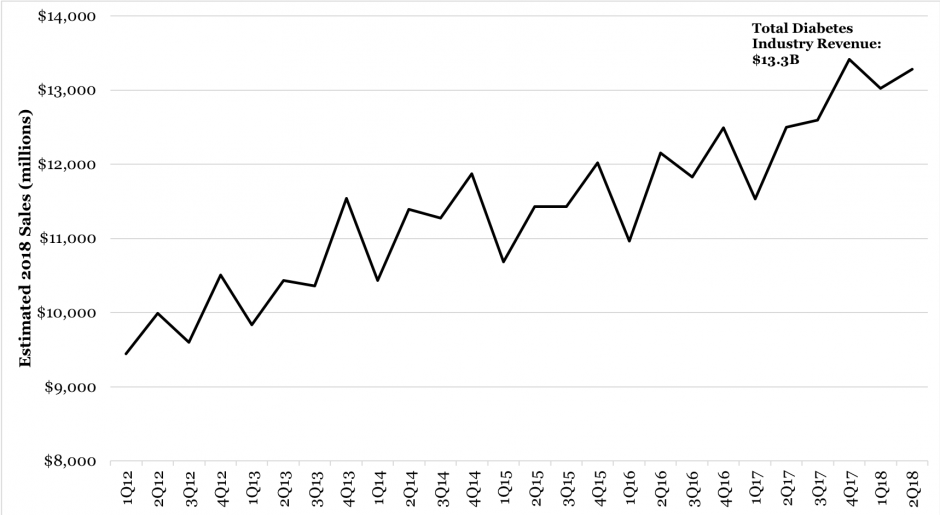 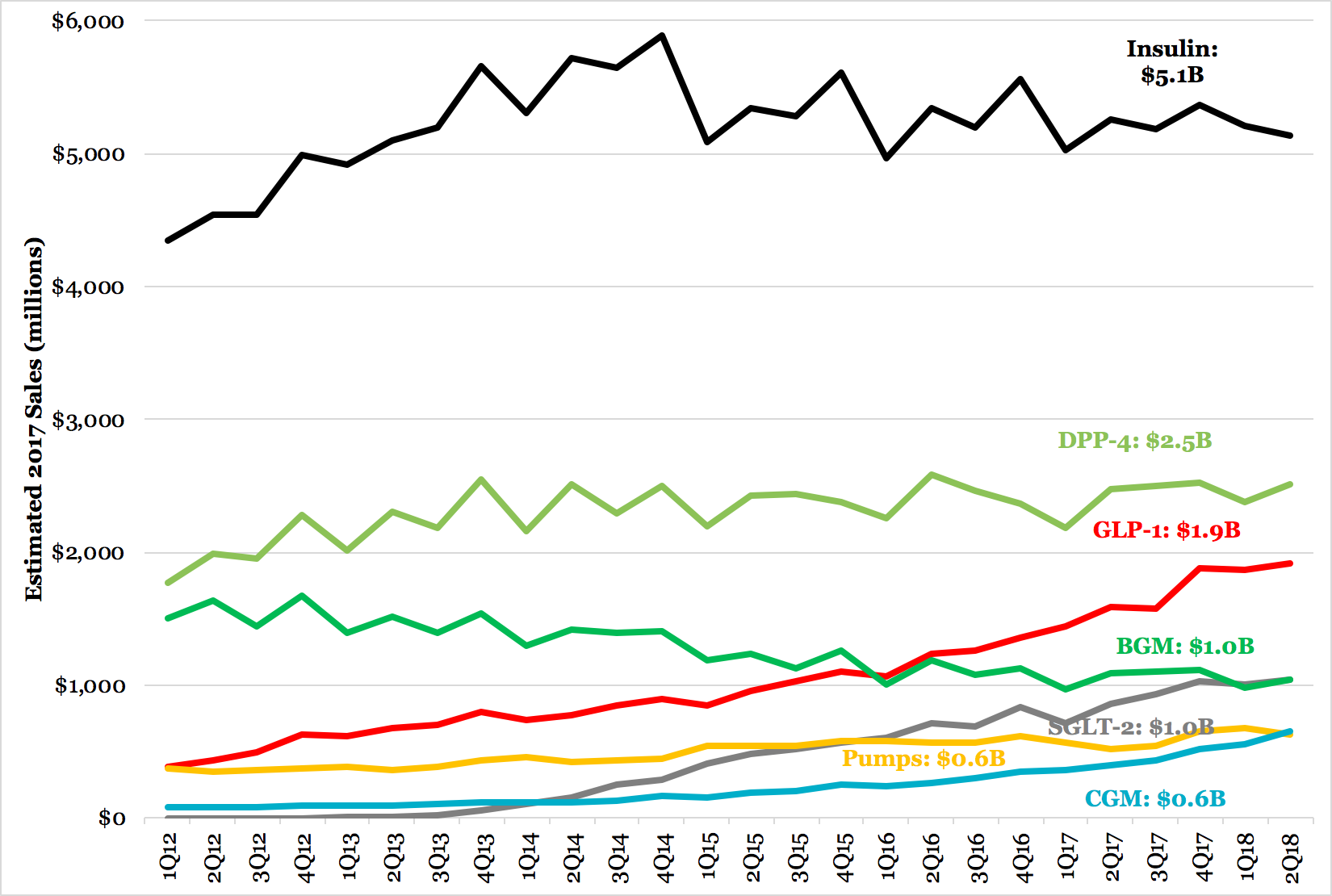 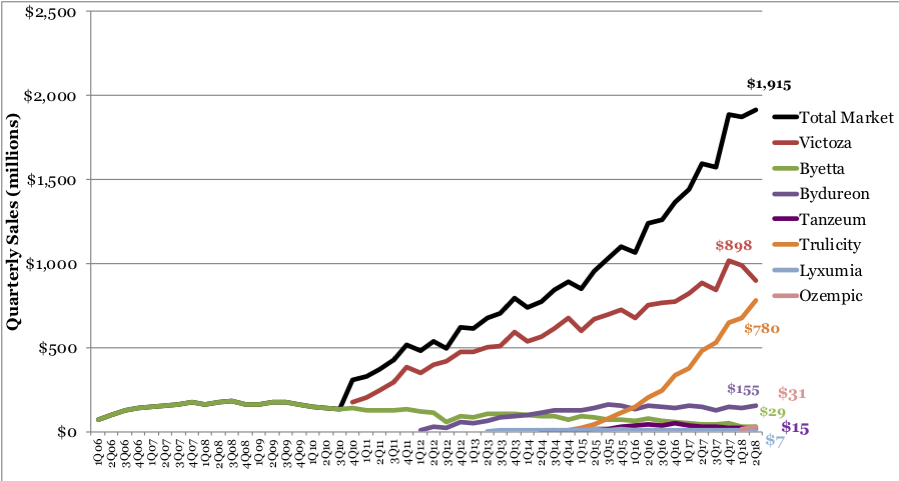 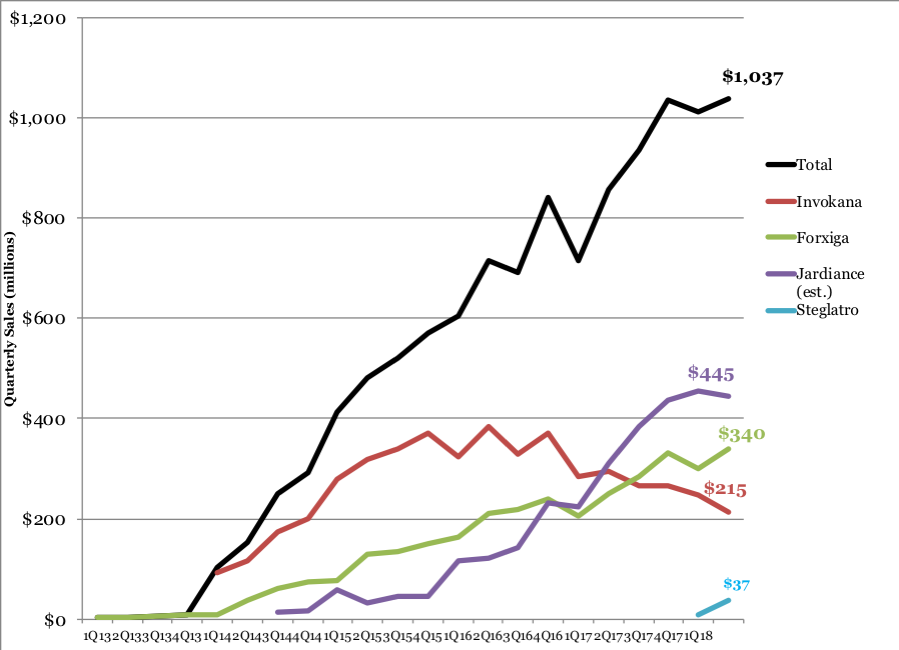 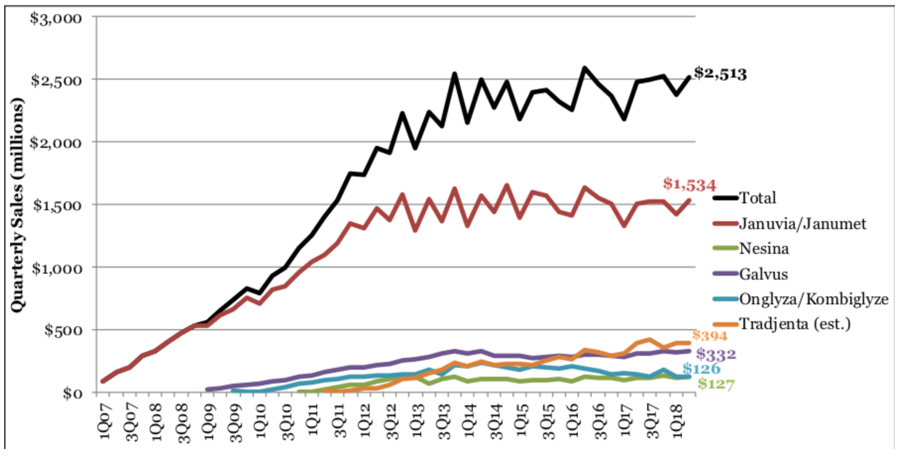 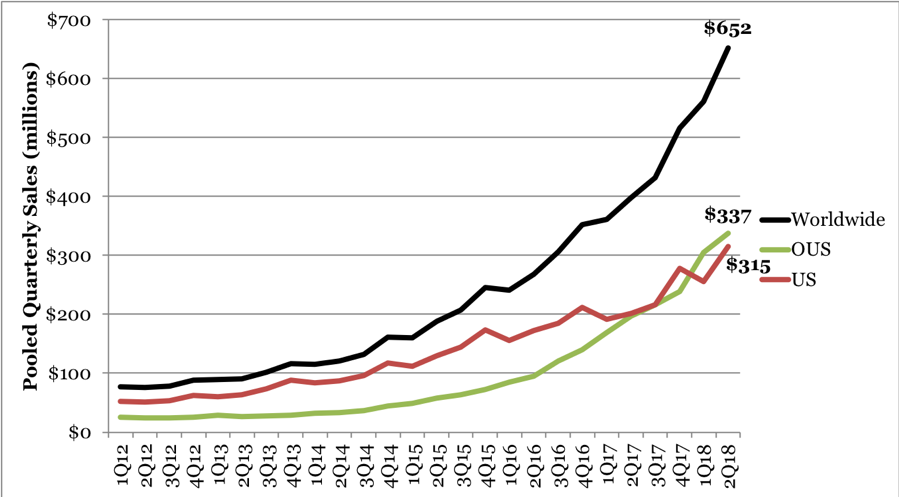 By our estimates, the worldwide CGM market grew to ~$1.2 billion in the first half of 2018, up an impressive ~60% YOY from 1H17. This represents faster growth from a much higher base of sales – 1H17 saw sales of ~$759 million rise ~50% YOY. We estimate global CGM sales were ~$561 million in 1Q18 (up ~55% YOY) and a record-smashing ~$652 million in 2Q18 (up ~64% YOY) – the latter was a milestone for the category, crossing $600 million in quarterly sales for the first time in our CGM model. Notably, 4Q17 was the first time crossing $500 million in quarterly sales, meaning 1H18 has been quite the half year for the category. The acceleration is a testament to what could be an inflection point in the field: CGM may finally be moving from an early adopter technology to a broader user base, especially with four excellent sensors on the market, two factory calibrated sensors, two AID systems in the US, balanced US and OUS momentum (especially OUS sales for FreeStyle Libre), and rising clinician enthusiasm. Both 1Q18 and 2Q18 saw international CGM sales exceeding US sales – the first time we’ve ever seen this (more geographic details below). Assuming seasonality, CGM is on pace to handily cross $2.5 billion in sales for all of 2018! 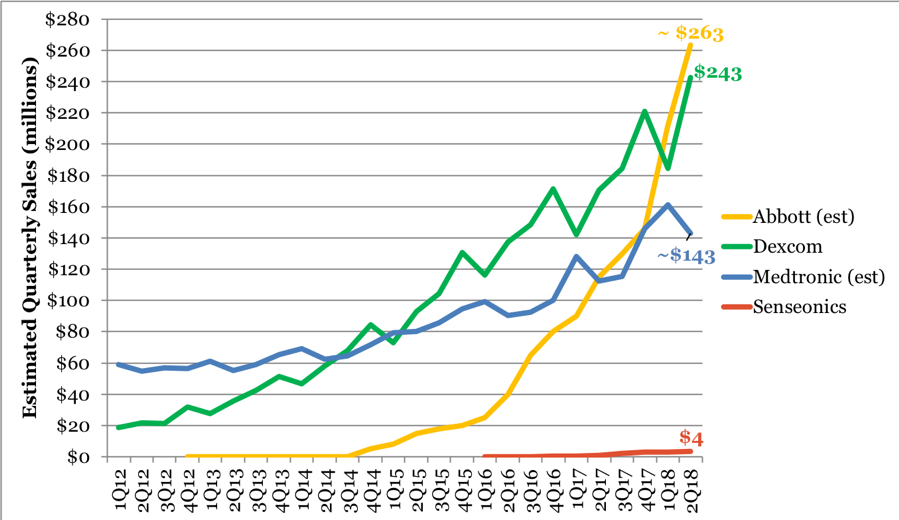 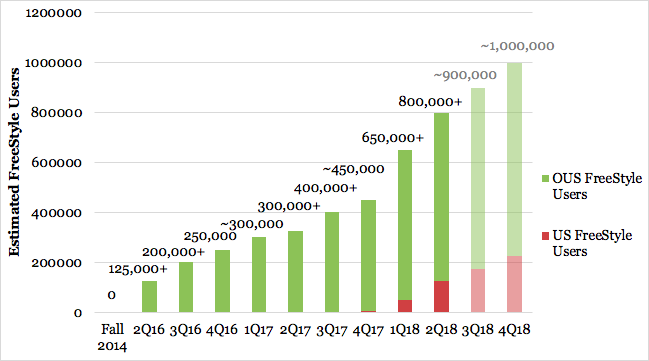 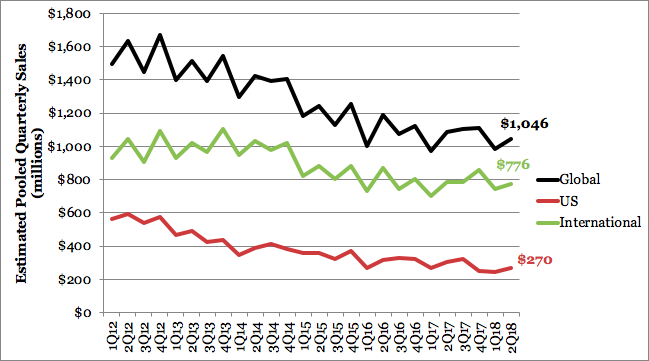 Pooled global BGM-only revenue for Roche, J&J, and Abbott totaled an estimated $985 million in 1Q18 (+2% YOY) and an estimated $1.0 billion in 2Q18 (-4% YOY). Both came on easy comparisons to declines of 3% and 8% in 1Q17 and 2Q17, respectively. 1H18 estimated BGM sales for the three companies totaled ~$2.0 billion, falling ~1% YOY from 1H17. BGM revenue has continued to drop steadily since its peak in 2011 – we estimate that pooled sales for these three companies have decreased ~36% between 2Q12 and 2Q18. J&J has been hit the hardest, declining ~43% between 2Q12 and 2Q18, followed by Abbott (-37%) and Roche (-29%). Still, there are signs of potential recovery, particularly in the international market, which saw three consecutive quarters of positive YOY growth (3Q17-1Q18) albeit followed by a 1% YOY decline in 2Q18. The US BGM market continues to struggle, with seven consecutive quarters of YOY declines – punctuated by an 11% YOY decline in 2Q18. Overall, we estimate Roche accounts for the lion’s share of BGM revenue for these three companies, contributing ~45% and ~46% of total sales in 1Q18 and 2Q18, respectively. 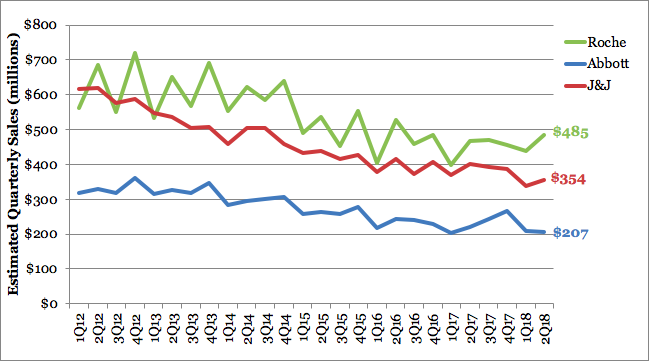 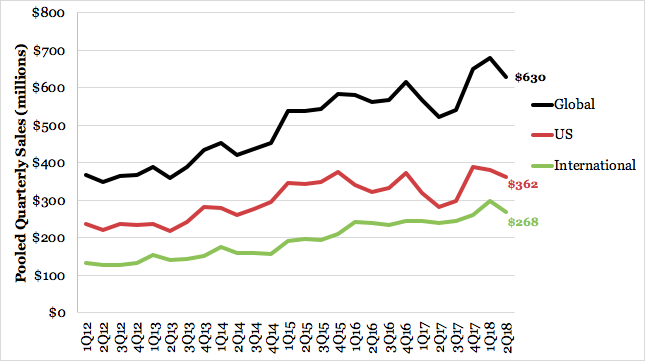 We estimate the insulin pump and delivery devices market rose ~20% YOY in both 1Q18 (~$679 million) and in 2Q18 (~$630 million), marking three consecutive quarters of positive YOY growth for the industry. This includes sales from Medtronic (estimated), Insulet, Tandem, Animas (estimated), Roche (estimated), Valeritas, and Cellnovo. Both YOY increases came on easy comparison to declines of 3% and 7% in 1Q17 and 2Q17, respectively. 1Q18 was actually an industry revenue record (~$679 million), handily surpassing the previous 4Q17 record of $651 million. 1H18 pump sales totaled ~$1.3 billion, rising 20% YOY. With the obvious exception of Animas, which has exited the pump market (October 2017), we estimate every company saw growth in both 1Q18 and 2Q18. Medtronic has carried the field in 2018, with an ~70% market share by sales and supplying ~73% of 1H18 pump industry growth – its highest contribution in nearly five years! Insulet and Tandem have also seen very strong revenue growth in 1H18, though with Medtronic’s gains, both companies have made smaller contributions to global pump industry growth (~14% and 9%, respectively) than we saw in 2H17; see a company-by-company recap below. Overall, it’s promising to observe this rebound from a very soft pump industry performance in 2017 – last year saw the first estimated yearly decline in pump industry revenue in our model going back to 2005, with most of the weakness coming in 1H17 (-6%) followed by a more moderate decline in 2H17 (-1%). We still see the pump market as somewhat fragile, as evidenced by Animas and Roche ceasing sales in the US in 2017. Still, with Medtronic, Insulet, and Tandem seeing excellent starts to 2018, two AID systems now in the US (670G, Basal-IQ), lots of international runway, and much more innovation to come (e.g., type 2 focused devices, mobile apps, next-gen AID systems with less burden, open protocol systems?), we expect pumps to see continued strength in 2H18 and beyond. In 2019-2021, we are also likely to see several potential new entrants in the US, including BD’s type 2 patch pump (by September 2019), Bigfoot (~2020), Lilly (~2019-2020), and Beta Bionics (~2020), and potentially Ypsomed (FDA review ongoing), Sooil DANA, Cellnovo, and others. On the type 2-focused delivery devices front, Valeritas had a record 2Q18, and CeQur acquired J&J’s Calibra Finesse (OneTouch Via) bolus patch device in July (launch expected in mid-2019). 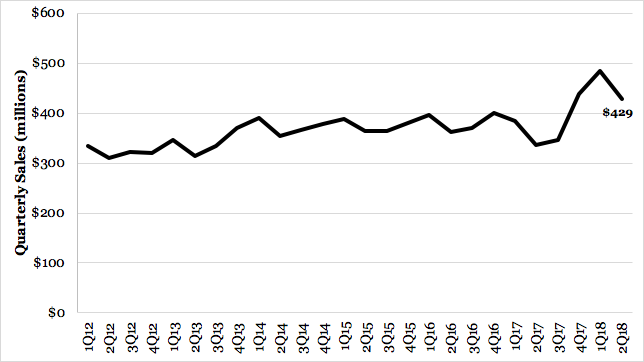 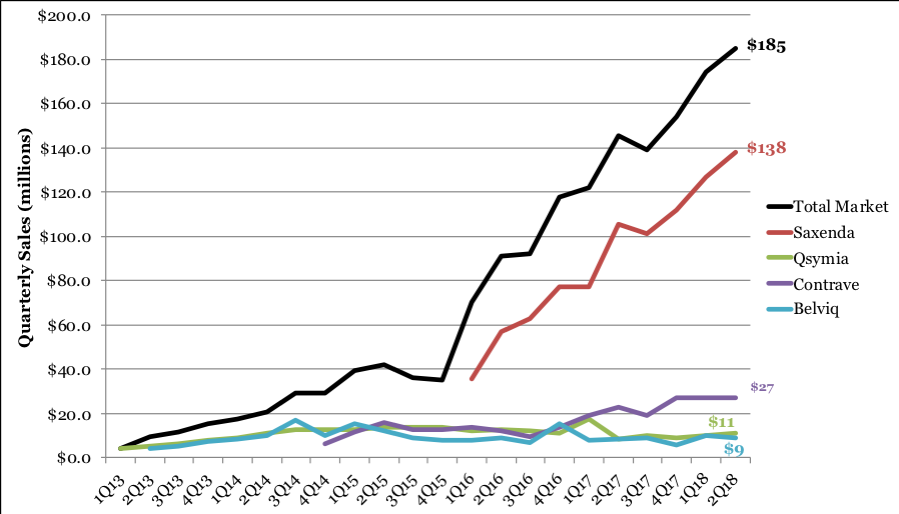