In a win for transparency, the Diabetes Technology Society’s BGM Surveillance Program recently released long-anticipated results – get them on the DTS website here. The three-site, n=1,035 (!) evaluation found that out of 18 BGMS representing ~90% of the commercially available systems used in the US (2013-2015), only six received the “seal of approval.”

Passing meters included Bayer’s (now Ascensia) Contour Next (100% compliant), Roche’s Accu-Chek Aviva Plus (98%), Arkray’s Walmart ReliOn Confirm/Micro (97%), Agamatrix’s CVS Advanced (97%), Abbott’s FreeStyle Lite (96%), and Roche’s Accu-Chek Smart View (95%) – all had >95% of trials within ±15% (≥100 mg/dl) or ±15 mg/dl (<100 mg/dl) of YSI (see Table 1 below). It was not a surprise to see the Contour Next, Accu-Chek, and FreeStyle Lite systems receive passing marks, as these are generally considered very accurate meters – particularly Ascensia, which had an impressive 97% within ±10%, a full ten percentage points ahead of Roche. We were also glad to see great accuracy for store-brand value meters from Arkray (Walmart ReliOn) and Agamatrix (CVS).

On the other hand, it was disturbing to see that two-thirds of these FDA-cleared meters did not pass the DTS evaluation, with some reporting dismal scores. Those that barely missed the cut included Arkray’s Walmart ReliOn Prime (92% compliant), LifeScan’s OneTouch Verio (92%) and OneTouch Ultra2 (90%), Abbott’s Walmart ReliOn Ultima (89%), Bayer’s Contour Classic (89%), and Prodigy’s Auto Code (90%). Those with even lower scores included Omnis Health’s Embrace (88%), Nipro’s True Results (88%) and True Track (81%), Biosense Medical’s SolusV2 (76%), Suncoast’s Adovcate Redi-Code+ (76%), and Philosys’ Gmate Smart (71%). It was notable to see both LifeScan meters missed the passing threshold, as well as one each from Arkray, Abbott, and Bayer (since all three also had passing meters). Most of the non-passing meters, however, have previously been criticized for inaccuracy, especially those from Prodigy, Suncoast, and Philosys. These results are extremely concerning in light of the latest market share data (April-June 2016) for Medicare BGM claims – 28% for Prodigy, 23% for J&J’s OneTouch Ultra, and 12% for OmnisHealth’s Embrace. In other words, ~68% (!) of the Medicare mail order BGM market in 2016 was for meters that did NOT pass the accuracy bar in DTS’ evaluation. This is very disappointing.

Overall, these initial surveillance results confirm suspicions raised at DTS’ May 2013 and September 2013 meetings – many FDA-cleared meters actually don’t meet the accuracy bar when purchased through retail sales channels and tested rigorously in the post-market setting. And of course, these are likely best-case evaluations, since they were done with trained professionals at three clinical sites: Rainier Clinical Research Center (n=353), Diablo Clinical Research (n=335), and AMCR Institute (n=347). In real-world use where handwashing and testing conditions are far more variable, the data would certainly look more concerning.

The triple-blinded, three-site study included over 1,000 participants (81% with type 1 or type 2 diabetes) and sourced meters from retail pharmacies and online retailers from different parts of the country. As we reported back in 2014, it was made possible through a grant from Abbott – quite interesting considering it is the BGM company that has most moved away from traditional fingerstick monitoring. The authors were a well-respected group: Drs. David Klonoff, Joan Parkes, Boris Kovatchev, David Kerr, Wendy Bevier, Ronald Brazg, Mark Christiansen, Timothy Bailey, Jim Nichols, and Michael Kohn. View the full data here; we’ve copied some of the key results below.

The modified Bland-Altman comparison showed quite a bit of bias in certain meters, as well as striking inaccuracy in the worst performing devices. Of those meters that passed, we noted a fairly large -6% bias in Abbott’s FreeStyle Lite and a -5% bias in Roche’s Accu-Chek Smart View; conversely, Contour Next had just a -1.2% bias, and Agamatrix had only a -0.3% bias. Of those that didn’t pass, BioSense Medical’s SolusV2 had a striking -10% bias, followed closely by Suncoast’s Advocate Redi-Code+ (-9% bias) and Nipro’s True Result (-8.9%). 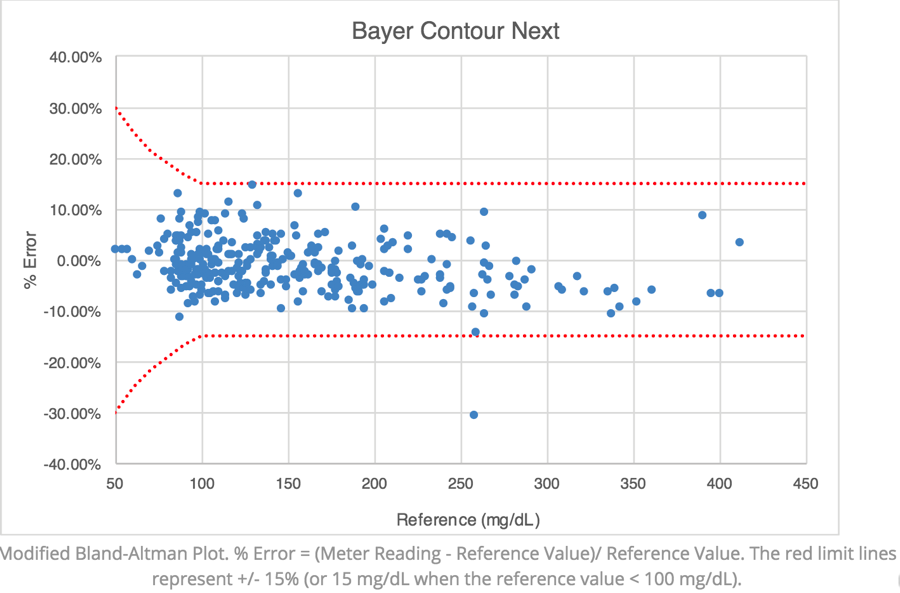 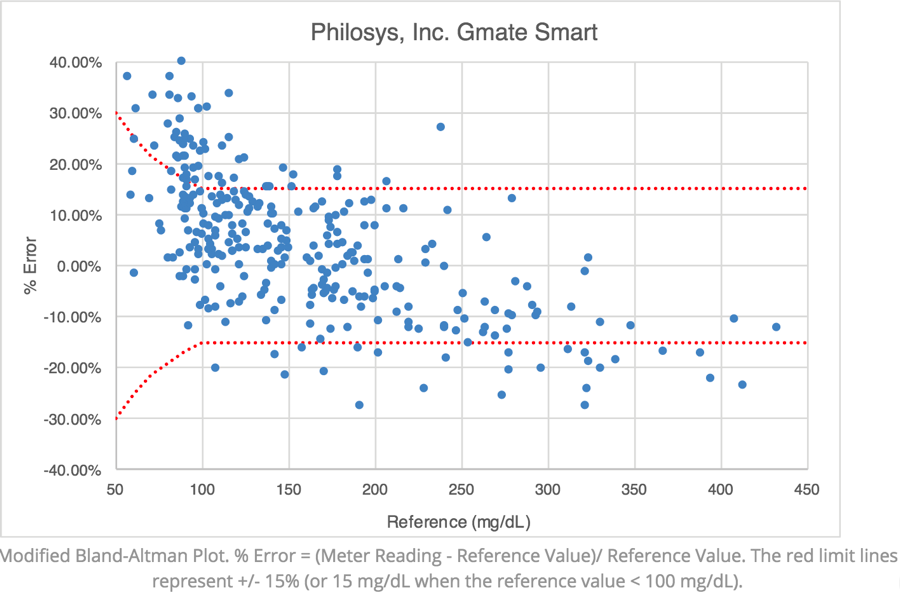 Q: How has the FDA reacted to these data? What actions are within its authority and bandwidth? For example, will it move to inspect the low-performing meter companies? Could these meters be recalled? Could the FDA impose sanctions on these companies?

Q: Will these results be published in a peer-reviewed journal?

Q: Will these data affect patient, HCP, and payer choice of BGMs? In particular, how will payers view these data, especially Medicare (given that ~68% of the 2016 mail order market was for meters that did not pass)?

Q: Will this Surveillance program continue to re-test meters in the future? Who will provide funding and how much would it cost to repeat this every year or two?

Q: Will a similar program be needed to assess CGM accuracy in the post-market setting?