In this annual “Reflections” piece, we assess the state of the diabetes field going into 2019. We look back on 2018 in diabetes therapy, diabetes technology, big picture topics, and obesity to note scientific strides and surprises, to celebrate progress and take stock of remaining challenges, and to identify pressing questions for the year ahead. We also for the first time take a closer look at NASH and NAFLD, given the activity of much of the field in looking at these conditions. Within each section, you’ll find themes, a list of highly-read reports, what we did not expect or got wrong in 2018, key questions for 2019, and company-by-company updates for the most meaningful players on what’s coming in 2019.

This Reflections piece is our favorite to write all year – and that’s up against the 999 other reports we’ve published since January 1, 2018!

Indeed, the field of diabetes seems to move faster with each passing year, and positivity surrounding scientific and technological advances is balanced by the ever-growing burden of diabetes on patients and the healthcare system. We also perceive the field as harder and harder to work in, from an industry perspective, both for small companies as well as larger ones. We were very happy to see individualized and patient-centered care become the expectation over the last year; that said, the degree to which those expectations are closer to reality for the average patient is still very far away. While there are many things people “know” to be true without a doubt, making these things “true” for patients are far from standard of care – we discuss throughout the report and particularly in the conclusion about what we’d like to see change.

Although medicine (therapy and technology) has improved at an unprecedented rate, healthcare systems throughout the world have evolved on the slower side. While there is reason to be optimistic about the future of diabetes care, in terms of what is possible, it has become harder and harder to work in the field and there’s a growing gap between what is possible and what the status quo is for patients all over the world. At the same time, 14% of adults in the US are living with diabetes and 40% are living with obesity – and as people live longer with these diseases, the cost diabetes leverages on the economy will continue to grow.

Here are some “quick takes” on therapy, technology, obesity, NASH, and “big picture” and some themes to get you started!

Leaving the year, we were struck by this Farnam Street blog post: “What’s Staying the Same?” It notes that the usual question – “What’s going to change in the next 5-10 years” – is not nearly as useful as its opposite – “What’s going to stay the same in the next 5-10 years?” Focusing on the latter, as Amazon’s Jeff Bezos has noted, is where lasting businesses are built. From our view, the quadruple aim is what will unquestionably stay the same – the need to enhance the patient experience, improve population health, reduce costs, and improve the work life of healthcare providers. In 2019, we look for tangible progress in access and affordability, improvements in healthcare delivery and patient support, and sustained innovation in both therapeutics and technology.

The GLP-1 agonist class continued to impress both commercially and scientifically, sustaining an impressive ~25% annual growth rate and posting numerous exciting clinical trial results. From a year of groundbreaking CVOT readouts, compelling innovations reaching the finish line, and growing consensus around a cardioprotective class effect, we have a number of top highlights for this thrilling class:

The year saw slowed SGLT-2 inhibitor class growth following safety concerns (amputations in 2017, Fournier’s gangrene in 2018), but recent and coming developments should bring significant tailwinds. These include the recent ADA/EASD Consensus Statement explicitly recommending SGLT-2 inhibitors (along with GLP-1 agonists) for people with diabetes and ASCVD, the updated ADA Standards of Care, a third positive CVOT in DECLARE, US and EU MACE indications for J&J’s Invokana (canagliflozin), and the stopping of CREDENCE (renal outcomes trial for Invokana) ~one year early due to a clear showing of efficacy (meaning it was no longer ethical to keep people on placebo). Each event contributed to clinical optimism for the SGLT-2 class in the latter half of 2018. But given lingering safety concerns – furthered by new analyses – our optimism is measured for whether the class will return to more than single-digit annual class growth in the near future. (Longer-term, SGLT-2s could tap into an entirely new market with heart failure and/or renal indications separate from diabetes.) More than any other class this year, SGLT-2 inhibitors offered a tale of conflicting forces.

4. Market Entries and Withdrawal Make for A Mixed Year for Biosimilars: Action from Merck, Sanofi, Mylan/Biocon, and Novartis

12. Increased Cooperation and Collaboration Between Endocrinology and Cardiology, Driven by New Options for CVD Risk Reduction

Most Unexpected News/Things We Got Wrong

The list below covers expected 2019 milestones for phase 3 and approved products. We acknowledge that this list may not be 100% complete, though we’ve tried to be as comprehensive as possible based on the most recent public updates. If you notice anything missing, please write us.

1. CGM Milestones: ~1.5 Million Global Users, Nearing $3 Billion in Global Sales; Innovation/Competition Are Higher Than Ever, With Plenty of Runway

If 2017 was a year for CGM “momentum,” 2018 was unquestionably a year for CGM “milestones.” We estimate CGM may now be used by roughly ~1.5 million people globally, with global sales nearing $3 billion in 2018 and accelerating to over 70% YOY growth. The field seems to be reaching a real inflection point in sales and user base growth – see below. The global CGM user base has nearly doubled from the midpoint of our estimate one year ago (0.7-1 million), led by a remarkable >1 million FreeStyle Libre users globally on >$1 billion in expected sales. Libre alone has more than doubled its global user base from >450,000 users in late 2017. Dexcom is also growing fast, propelled by G6’s earlier-than-expected launch with factory calibration – we estimate roughly 375,000 global Dexcom users on expected 2018 sales of ~$975 million (+36% YOY). Dexcom held its first Investor Day in December, laying out a five-year vision to at least double sales within its existing target markets – to say nothing of the huge promise in non-intensive type 2 diabetes with the Verily low-cost, disposable CGM (initial launch by end of 2020). A big Medtronic milestone came in 3Q18, when management announced that CGM sales are now larger than its pump sales – this puts Medtronic’s estimated CGM sales in 2018 at roughly ~$700-$800 million and possibly more, driven by >135,000 active/trained users on the MiniMed 670G/Guardian Sensor 3 and June’s US launch of its standalone CGM, Guardian Connect. The sales milestone signals Medtronic’s shift to a CGM company that happens to sell pumps, rather than the other way around. And though it’s still early in Senseonics’ commercial history, the company had a strong 2018, moving quickly from a positive FDA advisory committee in March to FDA approval in June to its first US Eversense insertions (90-day wear) in late July and launch of the 180-day Eversense CGM outside the US. It was notable to see for the first time in our model that international CGM sales now slightly exceed US CGM sales (both estimated), though both geographies saw clear acceleration in 2018. 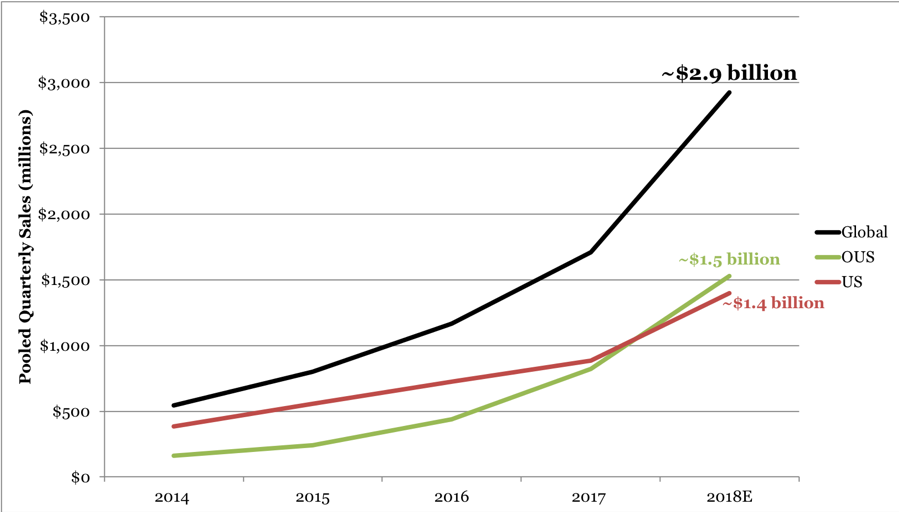 Chart assumptions: includes 4Q18 estimated sales for Abbott, Dexcom, Medtronic, and Senseonics based on either 3Q18 guidance or conservative growth projections. Sales for Medtronic and Abbott are estimated for all five years shown, based on conservative assumptions and management commentary. Dexcom and Senseonics sales are based on quarterly calls from 1Q14-3Q18 and the most recent full-year 2018 guidance. 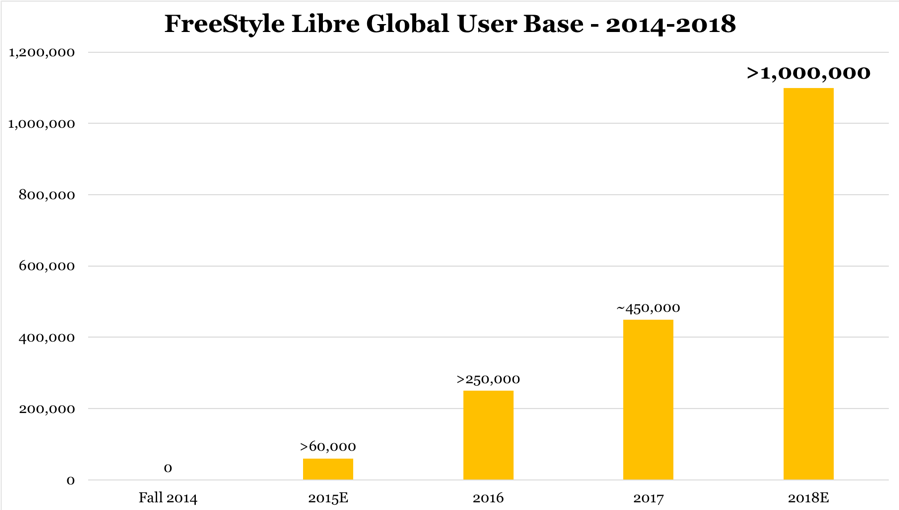 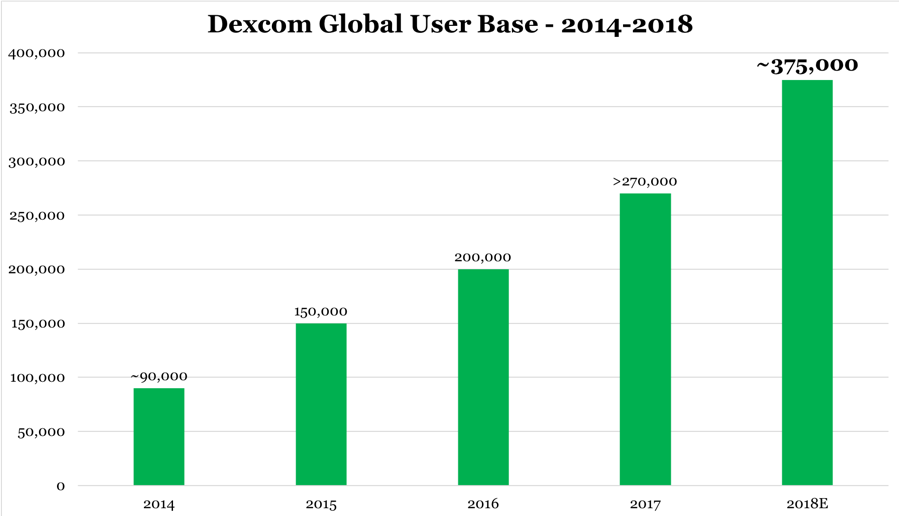 Where does the CGM category need to go?

2. Ecosystem of Component AID Parts Coming to Fruition, Thanks to Work of FDA (iCGM!), JDRF, Helmsley, Tidepool, and the DIY Community

Where Does the AID Field Need to Go?

7. Decision Support for MDI Users Gets Far More Attention; What Kind of Outcomes Should We Expect? Why Hasn’t Basal Insulin Titration Taken Off?